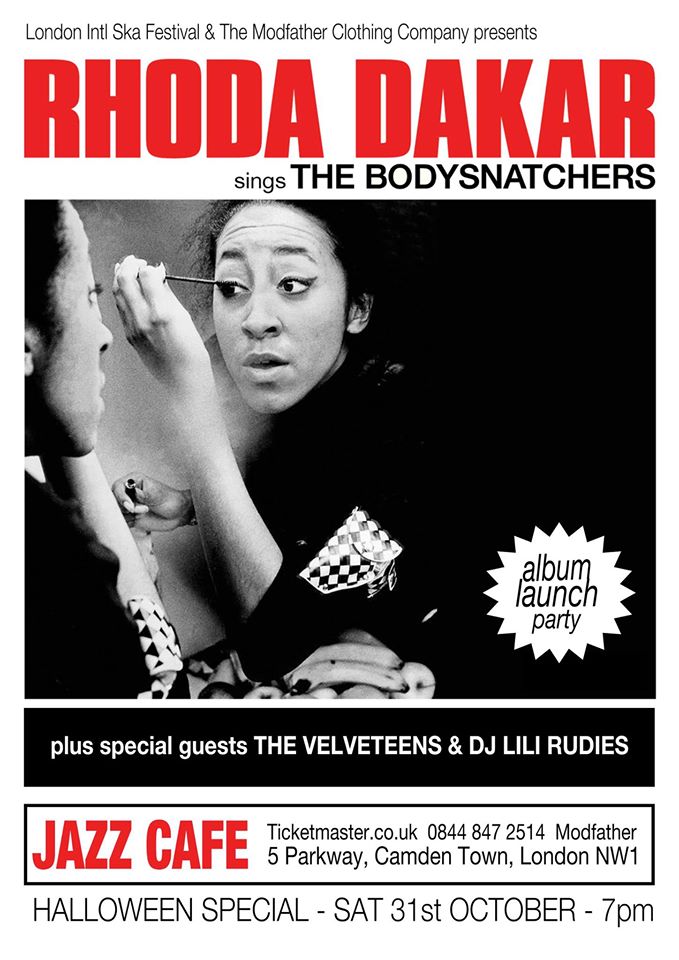 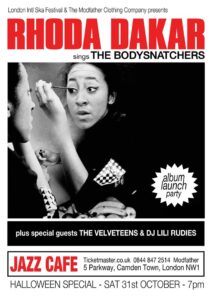 Halloween with the former singer with the Bodysnatchers?  Not as spooky as it sounds, just a damn fine gig says Ian Canty.

Just down the road from Madness’ old HQ The Dublin Castle, across from Camden tube station (old ‘69 skinhead territory) sits the Jazz Café venue. Quite a fitting place to witness the re-animation of the Bodysnatchers on All Hallows Eve…………

First time visit to the Jazz Café for me, a pretty nice hall with a floor above for eating while you watch the band above…unusual. Still the sound was spot on and the DJ set of Reggae classics certainly got one in the mood the evening’s festivities. It gradually started to fill up and was fair rammed by the time Rhoda arrived on stage, but we’re getting ahead of ourselves….

First on were Leeds youngsters The Velveteens debuting a new line up, which meant for a few rough edges but they delivered a highly enjoyable set of 60 influenced pop. They reminded me a bit of the Bangles (hold on if you think I’m having a go here: I’m talking about the pre-“Walk Like An Egyptian” band when they came out of the Paisley Underground scene, a very different and much more satisfying beast altogether) in that the harmonies were spot on, a bit of a classic “Girl Group” approach, nice 60s guitar breaks and very welcome it all was too. A promising band to keep an eye on.

The atmosphere was building nicely and by the time Rhoda Dakar’s band started the instrumental introduction to the set there was just enough room to dance a bit but not quite enough for a full-on skinhead moonstomp…..good, ahem, “vibes” prevailed. A perfect time for Ms Dakar to make an entrance, which she did, down the staircase to the stage sporting a witch’s hat specially for the occasion which she swiftly discarded as “a bit silly”. A beguiling stage presence, Rhoda is totally at home on stage, funny, self-deprecating and quick witted – just a joy to watch. And what a voice! But one I am bound to say has been criminally underused over the years, but at least she’s back and in fine form now. Plus on the evidence of tonight I refuse to believe she was even born in 1980, let alone making records then, she looks so young!

An early highlight is a smashing version of the Bodysnatchers second single “Easy Life”, which gets everyone moving and sets the mood of the whole performance. A look back to a past that never got a real chance then, bursting back into energetic life to the delight of the assembled crowd. Not really nostalgia as we really never got to hear this at the time, aside from the 4 single tracks and Peel sessions. “Ghost Of The Vox Continental”, “Happy Tune Time”, “007”, “Too Experienced”, they’re all rendered with aplomb by a crack backing band (led by Terry Edwards (ex-Higsons….with the Bodysnatchers and Specials members on stage the participants spanned the Two Tone golden years) and Rhoda’s excellent vocals.

“Ruder Than You” really captured the spirit of the original Bodysnatchers – Rhoda is the ultimate Rude Girl – taking on the boys and beating them at their own game. Real girl power, not the phoney baloney Spice Girls variety.

It was impossible to keep still and when towards the end of the set old friend Lynval Golding arrives on stage things go up a notch further. He dedicates “Sweet Sensation” to Rhoda and later Lynval stops the music to pay tribute to Rico, it’s a genuinely touching moment. My mind went back to seeing Jerry Dammers Spatial AKA at Poole with Rico guesting – as the gig ended on stage the band kept playing in the foyer – I found myself standing right next to Rico as he played that incredibly lyrical, sometime beautiful, sometime baleful, but always moving, sound. That man was forward and incredible. The crowd started to chant “Rico, Rico” – it was very moving and a great tribute to the man himself.

Of course it all finishes with a rollicking version of “Let’s Do Rocksteady”, the band doing their party pieces and everyone in the place having the time of their lives, for once party time had really arrived on Halloween. It was all you could ask from a gig – great music and singing, a clued in crowd, it was at times both funny and poignant and above all, a perfect re-stating of the original Two Tone ethic – it had the lot.

The Velveteens can be found on Facebook and Rhoda Dakar too.