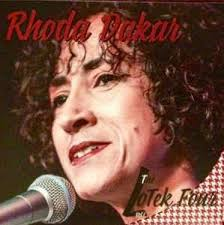 Stripped back EP, the first in a new series of limited editions by the secret weapon of Ska Rhoda Dakar. LTW’s Ian Canty relishes the chance to hear one of the great voices of Two Tone allowed space to really fly…..

After a long time doing other stuff, Rhoda Dakar has returned to recording over the past few years, thoroughly re-energised and in fine voice. Through her time with the Bodysnatchers she was never really given the chance to stretch but still managed to impress, even though the band barely had time to get off the ground before they split in 1980. Her subsequent work with the Specials on “More Specials” and “In The Studio” gave that band an entirely different slant, a female focus where as before it was “all lads together”. She has been a criminally underused talent for so long, but happily she has returned of late to make a strong case for being the “uncrowned Queen Of Two Tone”.

Of course she finally had a chance to record the Bodysnatchers set for posterity, “Rhoda Dakar Sings The Bodysnatchers”, in 2015 and followed this up with some stunning live shows. With a cast of top musicians including her old Specials mates Lynval Golding and Horace Panter, she rolled back the years in magical style and gave fans a tantalising glimpse into what could have been for that band. Prior to that Rhoda also recorded the albums “Cleaning In Another Woman’s Kitchen” and “Back To the Garage” (with Nick Welch, ex-Bad Manners), with the former having the stripped down approach that continues on this, the first of a series of EPs with a limited edition of 250 copies. And it’s a beaut from beginning to end….

Drawing on a cast of talented players including “the hardest working man in pop music” Terry Edwards and her son Frenchie as a backing band, this EP is beautifully sung, played and wonderfully understated set. Five tracks that travel from her roots in Ska/Rocksteady to Jazz to Blues and even a little Country Soul, taking the air along the way in a thoroughly entrancing manner. With Rhoda’s singing you can feel all the hard times she’s been through, it is both heart-breaking but touching to hear her here, totally in control but full of emotion. Two phrases in the lyrics stood out to me: “try to smile” and “all the lessons we are here to learn” which give you a flavour of the prevailing feelings on show, trying to make the best of what you are given, learning even when it hurts so much, resilience through tears.

The EP is bookended by wildly differing takes of “Feel The Emptiness”, the first is suffixed “(Lovers)” and fittingly has a nice Lovers Rock skank feel to it. As is noted on the sleevenotes, “versioning” has long been a tradition in Jamaican music and the second attempt (Reefa) remodels the piece into classic Blues/Jazz torch song complete with a riveting, mournful flugel horn solo. “Tears You Can’t Hide” is possibly the nearest to her Two Tone days, with a great loping Reggae/Ska rhythm and the overall effect is as good as anyone has done in this particular mode, rivalling for style and feeling the greats from the late 60s like Alton Ellis and Jimmy Cliff.

In contrast “You Talking To Me?” has a clear Jazz influence, which runs in the family (father Andre was a UK Jazz great). One of those fine lazy sax solos embellishes this one and when Rhoda launches into the French section of the song, wow, it is a knockout. Finally “Dolphins”, the track which set in motion the whole project when Rhoda and her son performed it at a school show, is superb “rainy day” Jazz and with “Feel The Emptiness (Reefa)”, it brings to an end a flawless recording.

“The Lowtek Four Vol 1” is a joy, bittersweet tales of life gorgeously presented and sung. This is the first side of a classic album more than just an EP. 37 years on from “Let’s Do Rocksteady”, it is remarkable but true to state that Rhoda Dakar is producing her best work. Something that, If I were you, I would go out of my way to hear.