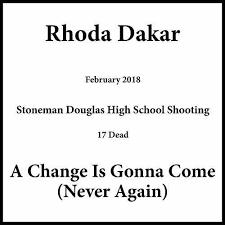 New single by ex-Bodysnatchers/Specials Two Tone Legend Rhoda Dakar, a version of Sam Cooke’s A Change Is Gonna Come, inspired by the brave stance of the students of Stoneman Douglas High School in the aftermath of the tragic shooting massacre….LTW’s Ian Canty hears righteous emotion and vocal perfection…

Last year Rhoda Dakar, one of this country’s best singers, gave us a quite brilliant EP in The Lowtek Four Vol 1 (It is reviewed here, Volume 2 is “in the works”). That record demonstrated the emotion and power that she brings to a good song. Now she is back with a pretty much perfect cover of Sam Cooke’s A Change Is Gonna Come and yes she’s done it again, giving a treatment to the song that is understated, moving and joyous. Despite having a unique place in Two Tone history, in being part of the Bodysnatchers and later-period Special AKA, this again underlines to me that Rhoda is making the best music she ever has in the present day.

Aghast at the massacre at Stoneman Douglas High School in Florida, but impressed by the reaction of brave student survivors of the shooting (how could one not be?), she felt inspired to do something for this cause and put this track together with her daughter in just a few days, amending the lyrics to mirror the message. A Change Is Gonna Come captures that feeling of hope, that the young will make this world a far better place, that people’s ideas can be changed for the better after such a tragic event. It is beautifully sung of course and the understated backing track fits the song like a glove. You would have to be one tough customer not to be moved when hearing this.

A Change is Gonna Come is for sale on Rhoda’s Music Glue site (see link above), as well as being available on iTunes, Amazon Music and Spotify, and donations from the proceeds will be made to the March For Our Lives campaign. It is a wonderful recording you should go out of your way to hear.

Buy the song from here