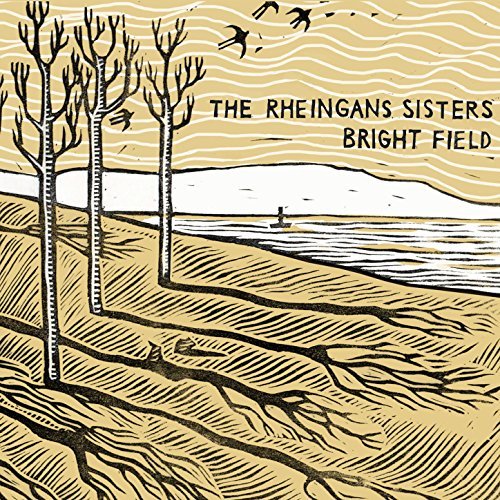 Composers, musicians and folk music scholars, The Rheingans Sisters, Rowan and Anna reach the milestone (I almost typed millstone which is so wrong) of  their third album as a duo. On the back of 2015’s award winning Already Home, they’ve  gone from strength to strength, adding their qualities to various projects before now returning to what really are their roots.

Having had a flavour of their new material at the 2017 English Folk Expo when they performed a short showcase set for delegates, Bright Field comes with some level of lip smacking anticipation and high expectation.

There’s something about the chemistry between musical siblings, possibly even a research study in there somewhere. Their model of deconstructing and reimagining traditional music and the ability to lead and follow down paths of musical improvisation and creation is a feature of their work and embodied in Bright Field. For all their background in working with traditional music, it’s an album that gathers together their first collection of newly composed music. Picking up the award for Best Original Track for Mackerel in the 2016 Folk Awards, they have something to live up to. A precedent set, that’s where they’ve come from, now where are they going?

They’re moving in a direction that sees them calling up a fine, wide palette of sounds. Fiddles, voices, bansitar, banjo, tambourin à cordes, flabuta (! Google it…) percussion and poetry all feature in varying degrees. Add the themes of musical dark and light and the spine of Bright Field takes the route of the inevitable contrast and intertwined emotions of joy and sadness, of hope and despair and aims to find the equilibrium.

Initially the more familiar fiddles provide the introduction; a welcome back, here we are again, before the perpetual roll of This Forest, following a repeating fiddle drone and dancing dark poem lyric before an ominous coda. On the other side of the coin, there are moments of grand lightness; Anna’s The Honeybee exudes an airy regal quality while Lo Segoner’s South West France origins could easily transfer to something as English as the morris.

The title track described as “a tune written in the afterglow” comes complemented by the poetic words of R.S.Thomas, which in turn is complemented by the melancholy of Rowan’s Edge Of The Field. An immeasurably poignant valediction and the penultimate track, it immediately stands out, made for repeating listening and study of the carefully crafted words that reveal a deep emotional charge. Along with The Forest it illuminates the quality of Rowan’s songwriting and combined with the intuitive musical rapport and Helmut Rheingans crafted instruments, marks Bright Field as a landmark in the musical progression of not just the sisters but the Rheingans family.

You can hear some snippets from the album here:

The Rheingans Sisters are online here