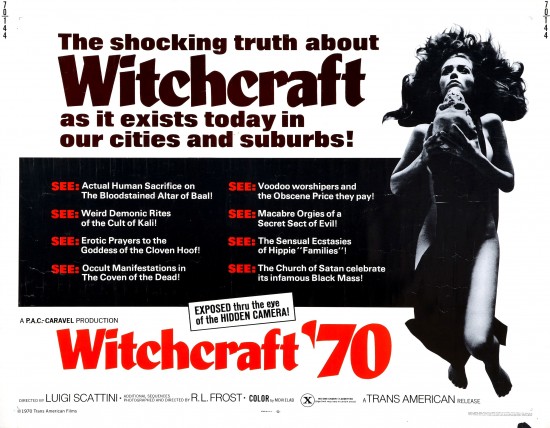 Witchcraft ’70—Enjoyable Mondo Documentary On Satanism And The Occult.

Maniacal necrophilia is how the opening narration describes the strange Satanic activities carried out late one moonlit night at Highgate Cemetery, London, in the late 1960s. As police assess the damage to the graves and headstones, and collect the scattered remains of the dead, the only eyewitness to the crime refuses to speak to the press. But our probing narrator will not let him be, asking if he will ever be able to outlive “the memory of those shadows in the night?”

“Shadows thrusting back the tombstones, prising open of the coffins, plunging their hands into the mouldering remnants of the dead. The needle-sharp pikes driven through the dusty
skeletons…?”

This Satanism straight out of a Dennis Wheatley novel, where “this obscene profanation becomes a formalised ceremonial, the religious observances of the Children of Satan!”

(And you thought your New Year’s party was quite wild?)

Having set the tone, and teased our expectations, this Mondo shockumentary, The Satanists (aka Angeli Bianchi, Angeli Neri) does not let us down with its over-the-top investigation into the rise and rise of Satanism and the Occult practices during the 1960s. It’s an enjoyable romp through tabloid tales of Devil worshipping, Voodoo cults, the Church of Satan, Black Magic, naked exorcism and Pagan rituals.