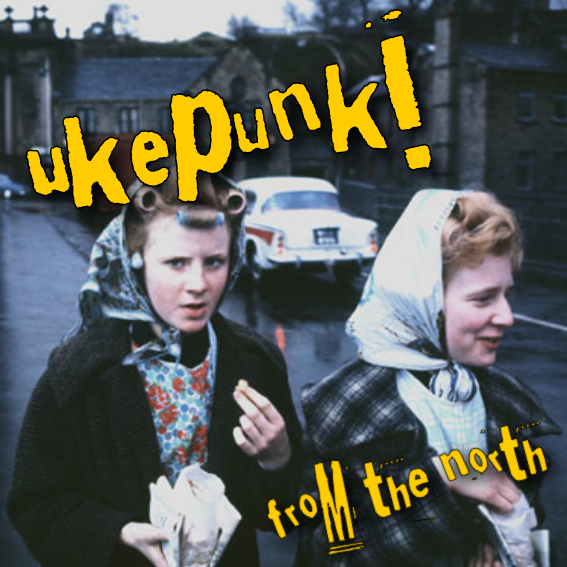 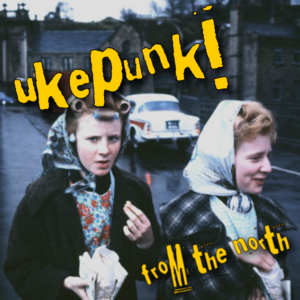 UkePunk – From The North EP

In considering the potential (if not actual) demise of the cash-rich music industry, journalist Will Hodgkinson suggests that people are rediscovering the joy of making music for its own sake and, crucially, representing the reality of their lives through song. Sounds a bit poncey I know but Ukepunk seem to me to be the living embodiment of this musical ethos. The four songs on this excellent new release ooze realism and originality. They’re really good songs, too.

There has been a progression since the release of debut album Punk Police, with the band sounding perhaps more assured and at ease with itself than before. The musical palette, while retaining all the elements which charmed the listener on the album (off beat, almost skankin’, uke? Check. Bluff ‘n’ gruff vocal delivery? Check. Supple bass runs? Check. Stripped-down yet drivin’ rhythm? Check.) has extended and now sounds positively post-punk in places and goddamn funky in others.

The songs show a real knack for illustrating the personal as well as wider political issues and maintain UkePunk’s  uncanny (and incredibly rare) talent for mixing biting social and personal commentary with a wry humour without coming over as clumsy or twee. Not since Morrissey sang of breaking into Buckingham Place with a sponge and a rusty spanner has this particular tightrope been so successfully navigated.

Similarly, title track From The North manages to plant a parochial flag without succumbing to any minority-ghetto-celebration mindset. Rather, it is a plain like-it-or-lump-it espousal of the perceived Northern qualities of loyalty, hope in adversity and sarcasm; “I can laugh at myself. I can laugh at you.” I’m not quite sure what they’ll make of it south of Burnage but I defy anyone not to join in with the chorus by the end of the track. All this and a fancypants sample of the headmaster from Kes for further Northern credentials. Lovely!

The scathing Trough seemingly has it in for both the leaders and those who are lead; politicians with trotters firmly in the aforementioned animal feeder and the rest of us with our soma-induced apathy of shite telly and even shittier, er, beans. I told you it was drily humorous stuff.

Seasoned UkepPunk-watchers will already be aware that the course of true love never runs smooth round their way and it’s business as usual on Arrows And Daggers on which our hero knows it can’t end well but goes for it anyway. A cracking tune.

The EP ends with the punk/funk two-fingers-to-growing-old workout of Back In The Day. “We were technicolour! We were kings and queens!” and the repeated refrain of “remember when you used to be someone!?” deliciously sounding both like a question and an instruction. For anyone (and really, isn’t it all of us?) who ever went to bed after an evening drinking cider on the park with your mates, when all the world seemed packed with possibilities ALL of which you were going to achieve, and then woke up thirty years later with a shit job, milestone mortgage, thinner on top and thicker round the middle, this song will hit home like a car door slamming on your hand. Stellar stuff.

The music industry may be dead, but Ukepunk are on a one-band mission to show that we the people can reclaim popular music back for ourselves, just like we did with punk rock 40 years ago. The peoples music? Most certainly. They could sing this stuff on the terraces at Old Trafford- Paul Davies
(the titular UkePunk himself) is, after all, a diehard Man U fan. But hey, nobody’s perfect.

All words by Philip Thompson. More writing by Philip on Louder Than War can be found here. You can follow on Twitter and check out his band Bug at their website – see more here.