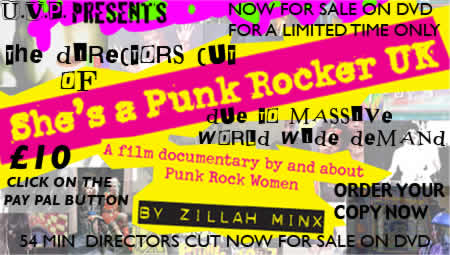 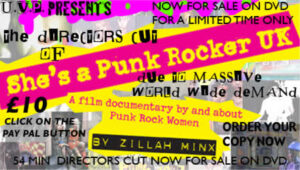 Directed by Zillah Minx, She’s a Punk Rocker tells the story of women in punk rock via interviews, archive film, gigs, music, photos & flyers featuring original punk women such as Poly Styrene, X – Ray Spex, Eve Libertine & Gee, Crass, Vi Subversa, Poison Girls, The Slits, Caroline Coon, Gaye Advert, Julie Burchill and many more! There is a trailer for the film below which you may want to see before jumping in with Sophie Sparham’s review.

Many of us are used to hearing the story of punk’s history. We know it came about in the late 1970’s, we know about the Sex Pistols rise to fame and The Ramones’ involvement with CBGB’s; but do we really know as much as we think about the movement?

Lead singer of Rubella Ballet, Zillah Minx presents us with the well needed story of the women in punk. Featuring journalist Caroline Coon, Poly Styrene, Gaye Advert, ex bassist of The Adverts, Vi Subversa, the lead singer of Poisoned Girls, and Eve Libertine and Gee Vulture from Crass to name but a few. This documentary ignores the male dominated representation of the genre and finally allows the females that were involved to tell the world their experiences’ of UK punk.

‘She’s a Punk Rocker’ unravels the unheard tales of the subculture; exposing  aspects that have been largely ignored or misrepresented by the media- which, trust me, is a lot more than you’d first think. The women involved explain how punk evolved into what it is today and their experiences of growing up in the time. Some of my favourite accounts include the story of the punk actress Helen of Troy and Vi Subversa’s experience of being an older character and mother within the subculture.

What really stands out to me about this documentary is not just it’s honesty about the development of the genre, but how it doesn’t come across as overtly feminist. The women involved just tell it like it is and the way they do it is absolutely brilliant. There is no fancy timelines or dramatically storyline needed to enhance this brilliant tale. She’s a Punk is a documentary that is absolutely vital to any punk fan’s collect. I guarantee you’ll get a more honest recount of the genre than any documentary made by the BBC.

You can watch the documentary here.

All words by Sophie Sparham. More writing by Sophie on Louder Than War can be found at her author’s archive.