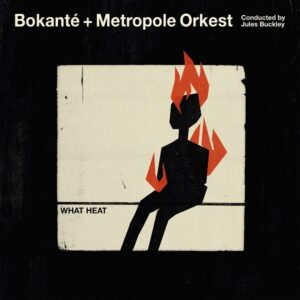 This is special, this is very special indeed. A newly formed supergroup of musicians from five countries and four continents joined forces only earlier this year to create Bokante, a blues/jazz collective with distinct connections to Malian sound have created What Heat with sometime symphony orchestra and sometime jazz big band Metropole Orkest under the watchful eye of conductor, composer and musician Jules Buckley. Sounds intriguing? It is.

With opener All The Way Home comes a distinct feeling of class. Class in the way of a superbly produced album arranged by a clear expert with an ear for perfect sound. What Heat isn’t an album of ideas hastily thrown together, instead it is an often dark, often uplifting collection of cinematic quality, swathing orchestra with clear and precise voices and instrumentation.

The feeling of drama cannot be ignored and the sheer expanse of sound is wonderful, each note is perfectly executed, each exhale is made with seeming ease and beauty. It’s hard to decide if the orchestra adds to the band or vice versa and, in terms of listening pleasure for What Heat, it really doesn’t matter. It swings from uplifting to downbeat in the blind of an eye and is placed in positon faultlessly.

Lè An Gadé-w En Zyé (When I Look In Your Eyes) is stunning, subtle and yet expansive whilst Réparasyons (Reparations) lifts the beat to a tribal sound and a clear afro-beat influence. The jazz touches are few but are effective and bring a little bit of improvisation perhaps and, interspersed with banks of violin and accompanying orchestra, sounds massive.

A slow, mulling start to Bòd Lanmè Pa Lwen (The Beach Is Not Far) couldn’t really prepare you for the exciting, race-along track that hits home after three minutes. Crossovers of several genres backed with the incredible string section make for exhilarating listening and Maison En Feu (House On Fire) once more becomes an incredible trip in the world of the cinematic.

A word of warning with What Heat – be careful not to let it pass you by. This is stunning beyond expectation and will have you pausing for breath on many occasion. Amazing.