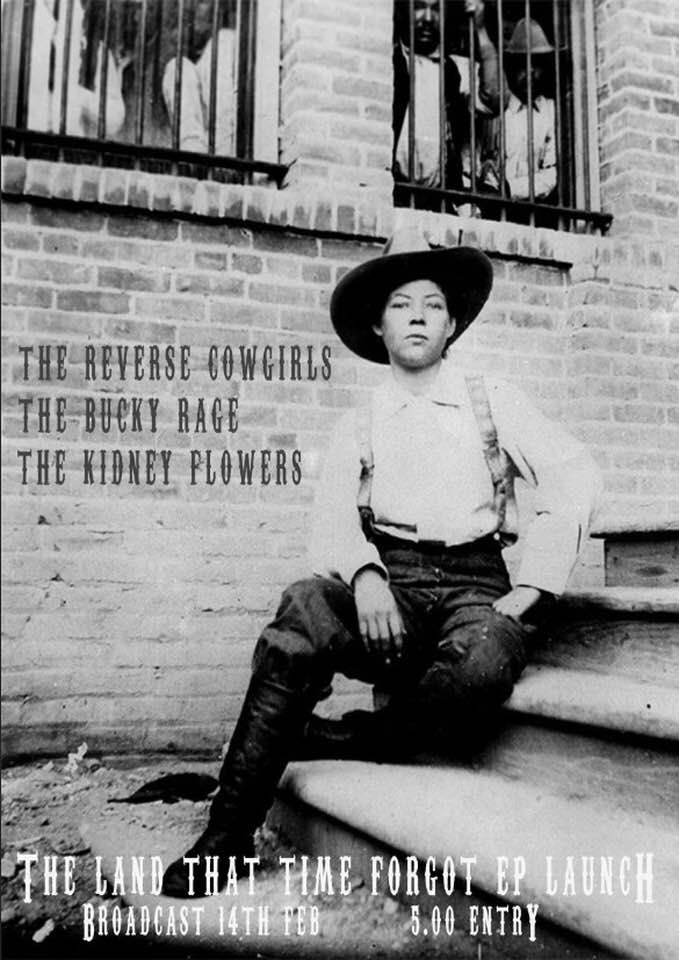 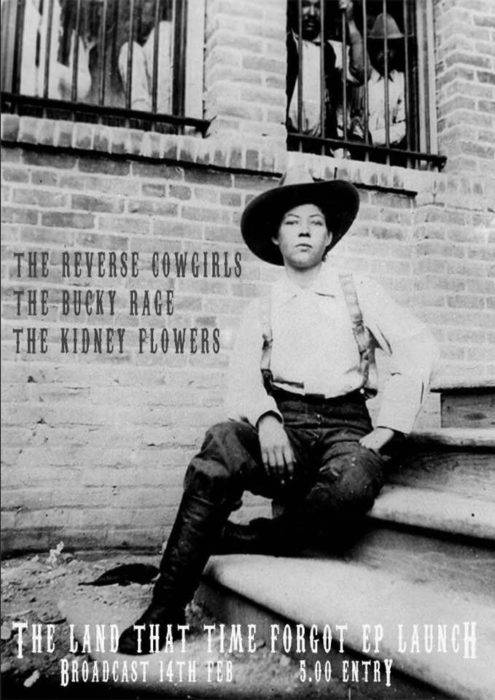 Back with a scorching new four-track EP of untamed cow-punk, Glasgow’s unhinged garage-rockers herald the perfect Valentine’s Day night out for loved-up punks.

Having first appeared as the ‘baby brother’ group to Glasgow’s revered garage-rock overlords The Primevals, The Reverse Cowgirls can now boast a substantial back catalogue. On the evidence of this wighat-raising new EP, the Cowgirls have not lost one iota of their bratty abandon, channeling The Cramps, Mudhoney and the mighty Sun Records studio as they crash through rock & roll’s gory glory years, leaving The Monkees and 50s pop as affectionately cannibalised  roadkill in their wake.

Following 2018’s MC5-flavoured ‘Hot Dinners’ EP, ‘The Land That Time Forgot’ marks a return to the Cowgirls’ original cow-punk frenzy, with the title track, ‘Bag O Bones’ and ‘My Favourite Knife’ kicking up a storm while gorgeous closing track  ‘Goodbye Cruel World’ evokes the song-writing smarts of doo wop kings Doc Pomus and Mort Shuman. As usual with the Cowgirls, ‘The Land That Time Forgot’ contains numerous nods to the band’s influences, while never falling into the trap of being over-reverential. With Alaine Alison Walls’ throbbing basslines, frontman Hugh McLachlan’s wired singing (Hugh even essays a convincing falsetto on ‘Bag O Bones’), John Gordon’s tribal drums and a blistering two-guitar attack by McLachlan and maestro Stephen Cafferty, the Cowgirls always kick out the jams with energy and conviction.

To celebrate the EP’s release, the Cowgirls are throwing an unmissable launch do at Sauchiehall Street’s underground rock & roll venue Broadcast on Valentine’s Day.  With support provided by garage-psych weirdos The Bucky Rage and sublime punk-primitivists The Kidney Flowers, what more could you want for a romantic punk-rock date night, all for only a fiver?

Buy ‘The Land That Time Forgot’.