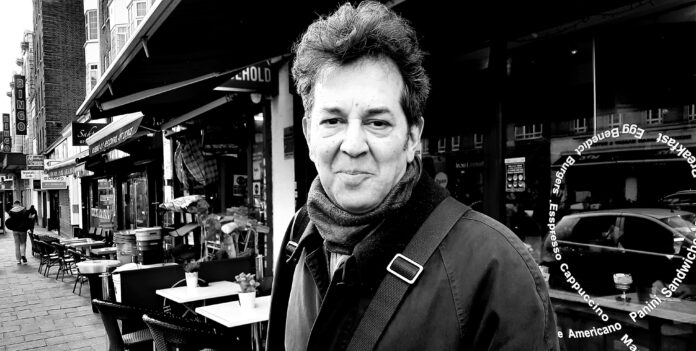 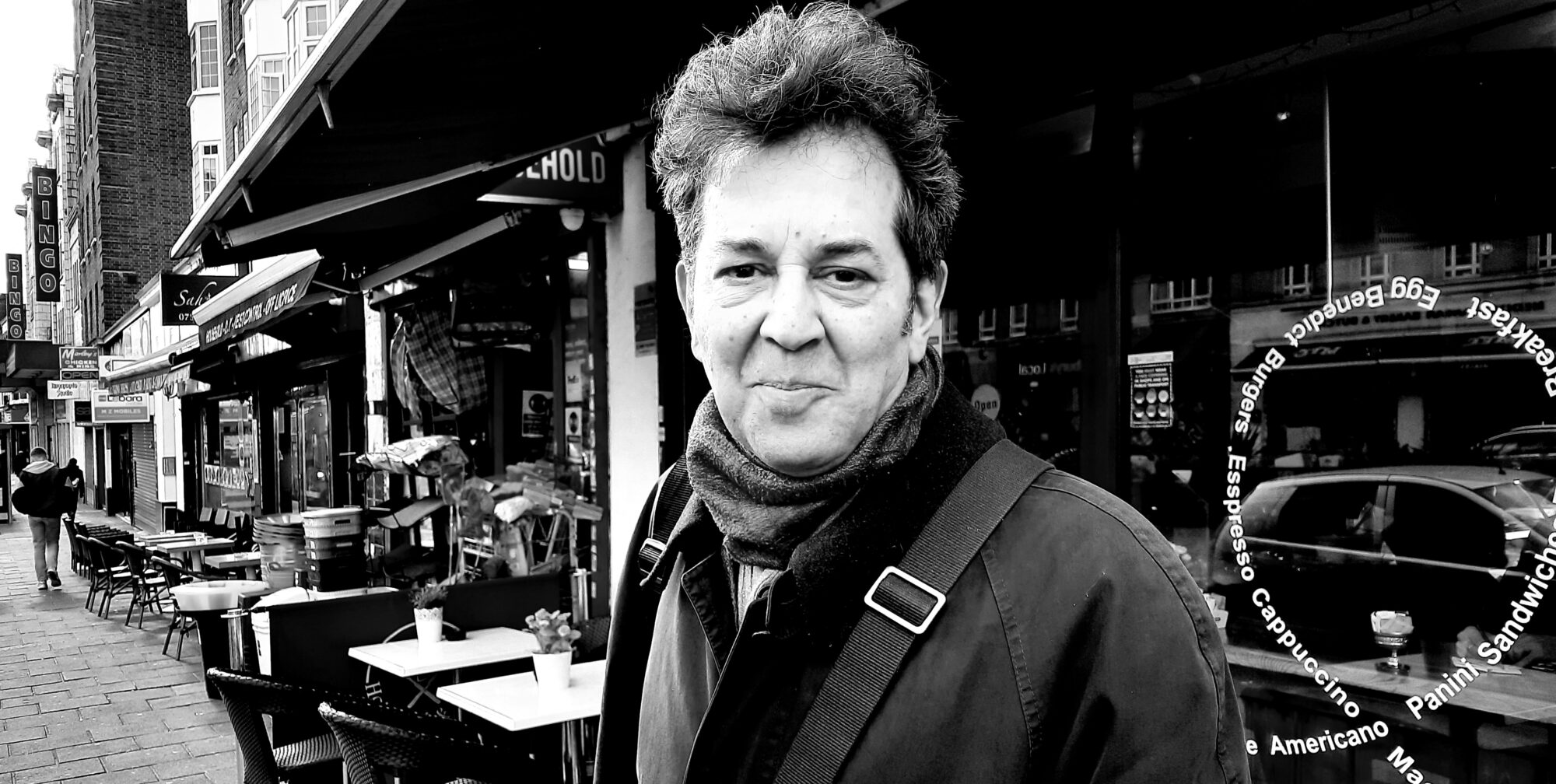 I feel a little dishonest, but I’m not completely sure why.

My interview with Bid of The Monochrome Set, was arranged some weeks ago by the band’s publicist, in order to coincide with the release of their 16th studio album Allhallowtide.

We both live in the same South London suburb and, in the two years since I first wrote about Fabula Mendax, we’ve come to know each other’s views; sparring over the occasional, highly opinionated cup of coffee, mostly about Brexit and vaccines. But also other proclamations of Bid’s that I refuse give credence, or a platform to.

However when the PR emails me the press release about the new LP, I quickly put aside any previous clashes, volunteer to write an article, and begin assembling notes. We meet up in Streatham Hill’s Lala Café, which nestles amongst the mop and bucket shops, between the bingo hall and the bus station.

Outside, it’s a bitter cold, grey February afternoon, and yet I hesitate before going in, though I’m not sure why. However, once inside and settled, I suggest we document some of Bid’s early years from a biographical perspective, before going on to discuss the album. He likes the idea, and content that we’ve found an agreed route to circumnavigate arguments about conspiracy, I began to scribble in my 50p notepad.

Born in the turbulent post-partition era following India’s independence, Ganesh ‘Bid’ Seshadri’s earliest memories are of being brought up mostly by servants at home in Calcutta, and being bad at school. Their family had a car and a driver, spending summers in the Himalayan town of Kalimpong, and he cherished a now mislaid photo of himself with Sherpa Tenzing.

religious grounds, and large-scale violence. But the young Bid was blissfully unaware of the 1964 riots in Calcutta and the ethnic cleansing of Bengali Hindus that year.

Aged around six, his parents brought him to London in 1965, “looking for a better life”. The family first lived with his Aunt Florence in Brixton Hill, then around South London, before settling in Streatham.

His father, Balakrishna Seshadri, a published wildlife expert, had studied engineering at Imperial College in the ’50s, and went on to design satellite dishes on the Post Office Tower. Grace Peters, his Anglo-American mother, had been sent to New York during World War 2. She returned to London after the war, and studied teacher training.

Bid attended Sunnyhill Primary in Streatham. He describes living his early years in “slight isolation, in a world of my own”, and “not actually listening to any music at all”.

But later at Battersea Grammar he “first started to mix with European kids of my own age”. Although English was his main language, he “didn’t like the Europeans in Calcutta, they weren’t nice”. Having said that “I didn’t get on with the Indian kids either” he laughs.

This period was “really the start of my life, my settled life” says Bid, and it was at school that he met Andy Warren, the band’s bassist and his oldest friend. “We were in the same house”, he recalls. “There were six houses, 90 kids per year. They lived near Clapham South, his parents are still there to this day”.

Together, the two teenagers flourished. “People met to play music, but no one sang”, he recollects. “Then one day I just started singing, and I enjoyed the adulation. So I wrote some lyrics, and soon Andy and I were writing songs”.

It’s to the semi-isolation of his early years that Bid assigns the band’s singularism; “the song In My Own World, that I wrote at the age of 14 or 15”, he says, “that probably defines The Monochrome Set to this day – we didn’t want to be part of society, we were about individualistic expression”.

At the age of 17 he walked out on his education proclaiming “they can’t teach me anything anymore”. I like this about Bid, now in his 60s the ‘fuck you’ indivisualism of his youth is still strong.

He had eschewed group identities at school, and would go on to avoid labels; punk, post-punk or new wave. However, the fact is that the band’s roots were intertwined with an early incarnation of Adam And The Ants.

In response to an advertisement in Melody Maker, Andy had met Stuart Goddard and Lester Square. Together they called themselves The B-Sides and for a brief period Bid was a member.

However Stuart, who has long experienced periods of intense depression, suddenly disappeared. Some months later he returned as Adam, forming The Ants, with Andy and Lester in 1977. “And I wasn’t invited,” laughs Bid.

Andy would continue with The Ants, appearing on their debut LP Dirk Wears White Sox, while Lester left to form The Monochrome Set with Bid. Warren would later team up with them again in 1979.

It was a vibrant period for British music, “a band in those days could pick up fifty fans after just a couple of gigs”, Bid sounds incredulous. “And Geoff Travis offered us our first record contract with Rough Trade on the strength of just one gig at Ronnie Scotts” he says.

So the young band did what they thought best, and moved to the Dindisc label, the offshoot of Virgin Records, run by Carol Wilson. She had just signed Sting to Virgin Publishing and was in search of artists who had “real depth, as well as a commercial, pop side”. Initial signings were Orchestral Manoeuvres in the Dark, Martha And The Muffins and The Monochrome Set.

However, it would be only the first in a series of label switches, none of which would produce the rewards they desired and the band would officially split in 1985.

Commercial success aside, the Set had a significant influence on peers such as Morrissey and Marr, as well as the likes of Blur’s Graham Coxon and Franz Ferdinand’s Alex Kapranos. Their stylistic and songwriting eminence is perhaps highlighted by Norman Cook’s cover of He’s Frank featuring Iggy Pop on vocals.

Outside it’s still cold and grey, while inside, the chattering of staff and customers in Lala ordering coffees and Algerian flatbread grows increasingly loud. I struggle to hear him as I attempt to fast-forward our conversation four decades, and discuss the band’s critically acclaimed, 16th studio album.

While tinged at times with touches of Americana, Allhallowtide is quintessentially English with the brisk beats and intelligent twists we’ve come to expect from The Monochrome Set.

In a lovely embellishment, the album is textured by lush harmonies from Alice Healey, Bid’s long-time collaborator in Scarlet’s Well. Her backing vocals contribute a depth to the sound that is both subtle and outstanding in equal amounts. “Her vocals are perfect” Bid tells me, “she did things I would never have thought of”.

The latest incarnation also sees another personnel change, with Athen Ayren replacing John Paul Moran on keyboard. Bid is tight-lipped on the matter, “it didn’t work out with JP”, he says.

“Athen came along and did some wonderful writing”, he continues. “I made just one request of her, on the whole album. I suggested something along the lines of Erik Satie, and she did Parapluie in one take”. As if by magic, the café is quiet for just a moment. He holds up his hands as if in vindication, he’s referring to the album’s instrumental piano outro. “Yes it’s beautiful”, I agree.

“When it comes to recording”, he continues, “my role is just to initiate the process with other creatives, and they take over. Like Mike, he has complete freedom to do on drums exactly as he likes”.

Mike Urban, the band’s drummer, also lives nearby. He’s well known locally as a DJ and photojournalist, whose Urban 75 and Brixton Buzz websites are renowned for breaking Lambeth issues onto the national news. It’s his second stint with the band, rejoining in 2016 after appearing on 1990’s Dante’s Casino.

That’s pretty much where the interview ends, and over these last few weeks I’ve had this uneasy feeling.

Allhallowtide is an uplifting collection, even agonisingly catchy at times. But written and recorded through pandemic times, a dark lyrical seam runs through the album that conveys sentiments that I don’t want to report.

In the last few days Putin has placed his nuclear weapons team on ‘special alert’, and yet another existential and terrifying threat hangs over humanity.

I’m struck with the idea that this has to be in the article, so I call Bid, who somewhat bemused, agrees and briefly we return to the noisy café.

Bid has often spoken about the creative creature that lies within, that he does not control. “That creature is not going to talk to you” he once told interviewer H Fay Khan.

But now, this afternoon, with a 40km long Russian convoy sitting just outside Kyiv, he’s slightly more direct. “I stand back and observe, there are things happening that I cannot see, and I’m prepared at any time to be wrong”. I wonder which Bid I’m talking to, is this the creature within or the everyday him?

“I’m beginning to wonder if we’ve been compromised, in some way set up” he continues, “and by that I mean Brexit”. I lean forward over the table towards him, “and I feel dishonest because I’ve been trying to close down your views because they’re not my views”, I confess.

I shake hands with Bid on the pavement outside Lala. He’s going to buy a celebratory cake for his and his wife Flo’s silver wedding anniversary. I head off in the opposite direction. As I look up to the ominous grey sky above, I wonder if this will be the last article I ever write.

For live shows and more news visit The Monochrome Set