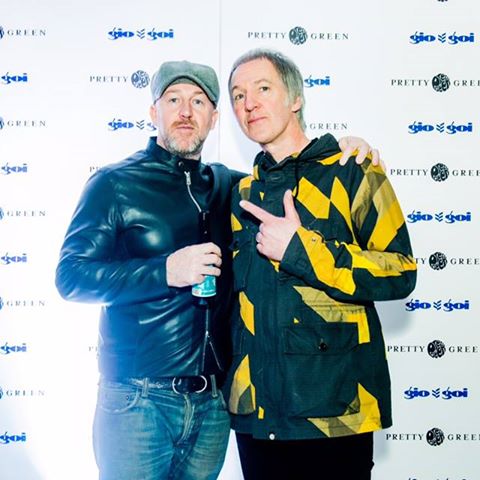 Last Thursday saw Pretty Green team up with Manchester’s own legendary clothing label Gio Goi for a special open-mic panel event at Granada studios, for an entertaining night of real talk, laughs and era defining memories. A panel which included Peter Hook, Bez and Martin Blunt as well as Gio Goi’s Chris Donnelly and DJ Graeme Park, and with Clint Boon hosting it was a night also held in the memory of Inspiral Carpets already much missed drummer Craig Gill. And what a night it was as some of the cities most celebrated music & fashion faces both looked back with stories and antidotes from Manchester’s glory years to discussing today’s scene and what it holds for the future. 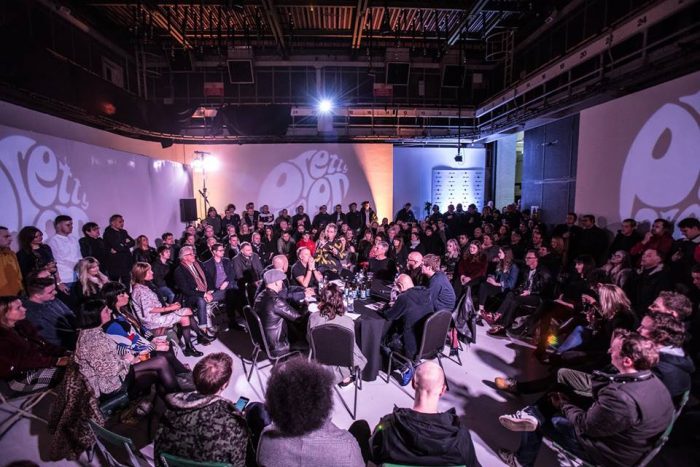 But it also proved to be a special night as both old skool faces and Manchester’s new movers & shakers turned out in style to welcome back the original creators & designers of Gio Goi – Anthony & Christopher Donnelly. And with recent news of the brothers taking back control of the label they started back in 1988 they did what they’d always done, since the days of Manchester’s acid house explosion and created the real buzz of the night – the boys are well and truly back in town as they begin to usher in the labels second coming with the same style and verve which made it the UK’s most celebrated acid house/fashion movement, ever. 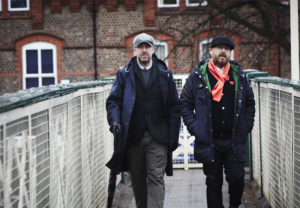 from back in the day, to today – The Donnelly Brothers

So what was the vibe on the night like to the Donnelly Brothers return with Gio Goi?. Especially from those that were there and witnessed its creation and impact on Manchester’s clubs and streets to become a national movement.Then who better to ask than some of the panel themselves, those that were there and saw it all happen first time around. What were their thoughts on the Donnelly Brothers back with the label once again.

Graeme Park
“Gio Goi made such an impact on the club scene in Manchester I actually remember when I first come over from DJ’n in Nottingham to the Hacienda. The crowds I played to in Nottingham were still dressing quite up market, you know with tight fitting clothes. But then I’m walking through the dance floor in the Hacienda and there’s all these kids in cool loose fitting, street style fashion and it was a real revelation. A look which originated in Manchester and championed by both Chris and Anthony with Gio Goi. ” 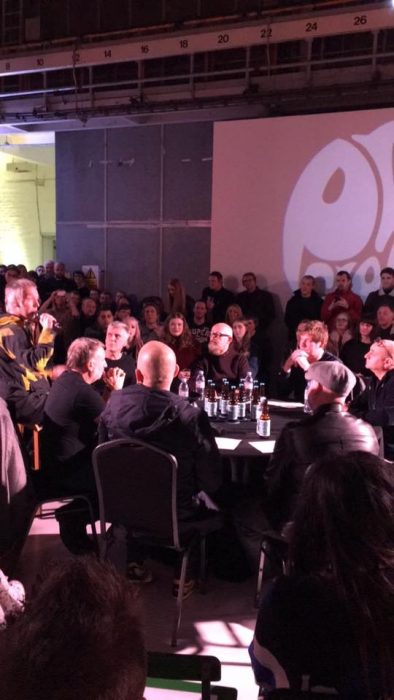 Bez
“Its back where it belongs isn’t it, Gio Goi were on the scene from the start back in the day when the parties first came in. Though over the years it kinda moved away from what it was really all about its now back with the brothers, and I know its going to make its mark once again.” 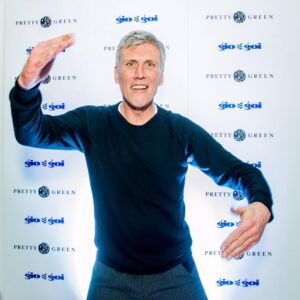 Clint Boon
“Its good news isn’t it, its one of the UK’s biggest clothing labels and its just great to see them back in action, because they’ve done a lot of work over the years. I think they lost it at one point with a bit of bad luck and with the business side of things but its good to have them back. I’m chuffed just having the Donnelly boys back because the cities just as creative as its ever been, as prolific as its ever been so its fantastic to have them back in the melting pot again.”

“I think they actually deserve a lot more credit for the things they’ve done, not only for styling the city but dance music culture in general, they put a look to it. They were also the first guys in the city to put the illegal acid house parties on in the late 80’s (‘Sweat It Out’, MCR’s 1st illegal acid house party). And its that sort of euphoric vibe we all witnessed back then which is still present today when you see Chase & Status, Disclosure or The Prodigy…you know, that primal celebration. They were on that in the 80’s so to see them on it again is really cool, and I’m looking forward to what they do with it now.”

Peter Hook
“Its really interesting characters like the Donnelly Brothers are still here doing what they do and they’re part of that group of people who forged the city into what it is, whether it be good or bad, you know. But the thing is, is that they’re all unique characters who played their part and the brothers are very much part of the story of Manchester music and fashion culture. Another thing about Manchester people is that they’re tough, you know very resilient and its why they’re able to come back with Gio Goi once again, with that same energy which put it on the map in the first place. Its something which they do very well so its great they’re back with it once again.” 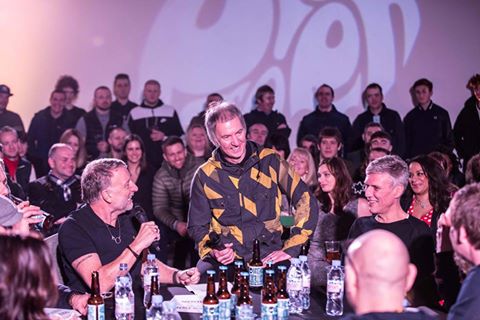 …and so right now its all about the future of Gio Goi and what the brothers have in mind for its return Word on the streets is that the label is to be ‘de-chaved’, as it were, and re birthed under the creativeness and style of the brothers themselves with Christopher Donnelly designing the labels vibe and look while using the classic Gio Goi type face logo which was used when the label first hit the streets.

And though the Donnelly Brothers never went away (as they turned their hand to music video’s like below with.. Deadmau5’s – ‘I Remember’, TV, events and even art) the label did – and that’s why their return to it has got not only the people of Manchester buzzing about it but everyone who knows and respects the brands history, influence and true style. Just as Pretty Green do coming together with the label for the nights  event, and whose creator Liam Gallagher was one of many youths inspired by both the label and the brothers themselves as he started out on his own journey into music and fashion in the mid 90’s.

Check out below,  clothing from the new Pretty Green clothing line which is a collection directly inspired by The Donnelly Brothers and Gio Goi, and signed by many of the nights guests its Pretty Greens own homage to the Gio Goi movement. 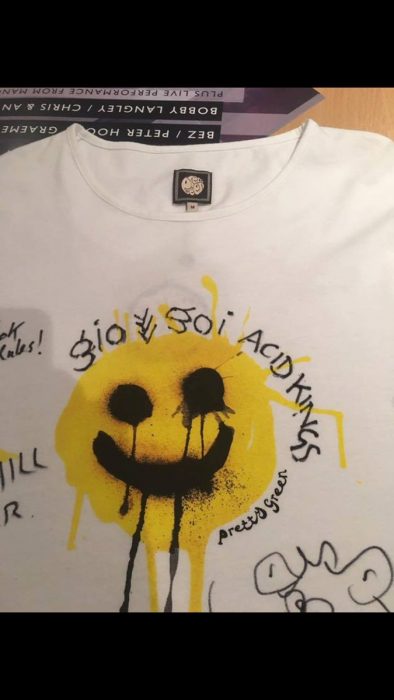 But anyone who knows how the Donnelly’s move wont be surprised to learn that Gio Goi isn’t the only thing their working on right now as they’re also putting together a new book and follow up to the highly reviewed ‘Still Breathing’ bio. Which will have the brothers look back on their life of football culture, clubs, acid house, the underworld, music and of course fashion and putting on massive outdoor parties (like the video below for ‘They Call it Acid’) . Written by author Simon Spence (Stone Roses ‘War & Peace’, Happy Mondays ‘Excess all Areas’ & Andrew Oldhams ‘Stoned’) its to be released some time later this year. 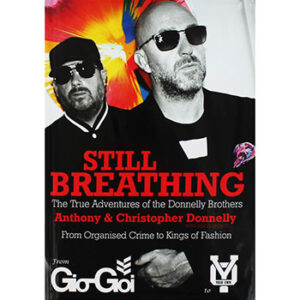 Infact these days you’ll also find Anthony & Christoper actually looking after artists & DJ’s with management company ‘Tempo’. Put together with former head of ‘360’ Andy Rutherford – who looked after DJ’s like Calvin Harris and Deadmau5. TEMPO already handles artists such as Shotty Horroh (1 of the worlds top battle rap artists) a collection of groups and over 25 DJ’s. For the brothers fashion and music have always gone hand in hand having in past dressed artists like Rihanna, Pete Doherty and Paln B.

Check out the video above for an interesting behind the scenes look at ‘Sweat It Out’ (below), Manchester’s seminal and first ever illegal acid house party which was staged by the brothers is the actual beginning of the cities party scene history. Something which in turn inspired Chase & Status to put out the track ‘Blind Faith’ (below) with a video actually based on Christopher Donnelly’s 21st birthday. Putting on a party is still one of their specialities as they stage the Stone Roses pre & after show parties across the UK this summer.

So as Gio Goi proudly open their new offices, stationed next door to Pretty Green on Carnaby Street, and with up to 50 shops stocking the new Gio Goi collection with flagship stores due for opening in Tokyo and New York, its safe to say its well and truly back – and of course in style.

and look out for the new Gio Goi collections… 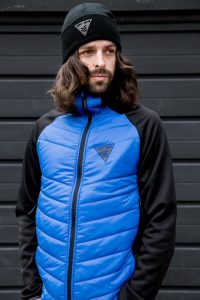 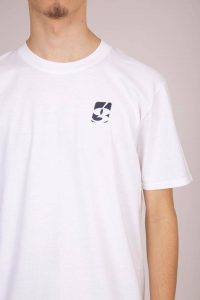 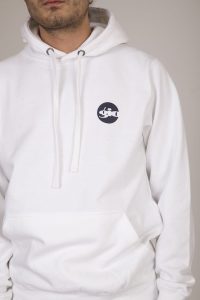