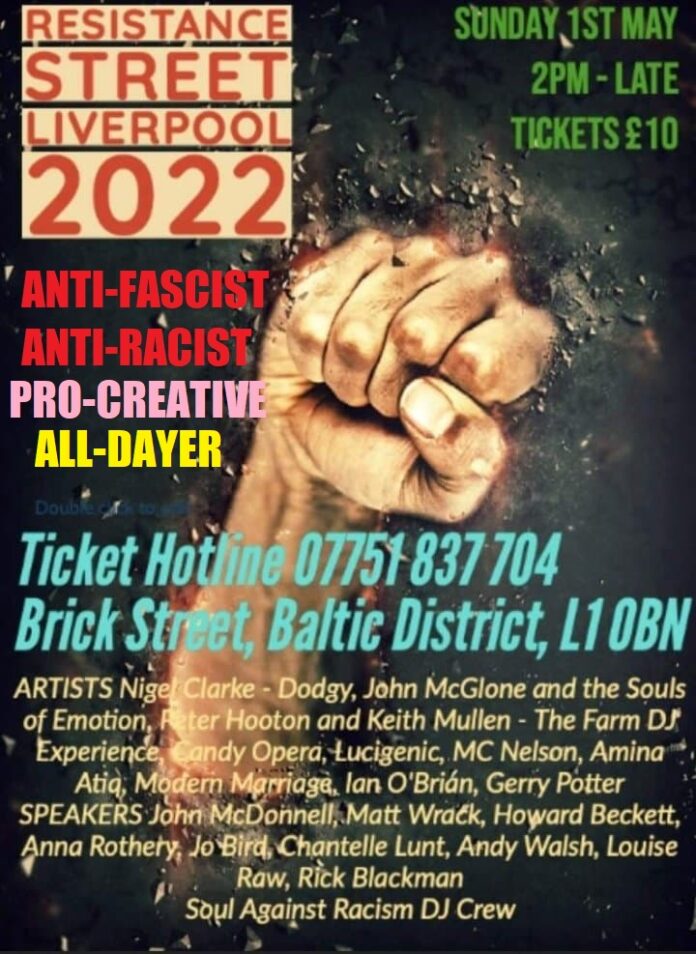 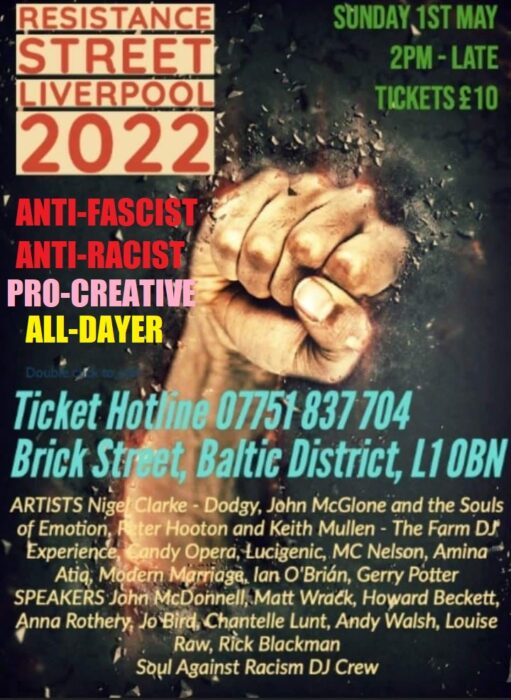 On Saturday May 1st 2022, bands, solo artists and political speakers will come together in a great line up assembled in Liverpool, in a stand against fascism and racism…. writes Richard Chorley (from Clash Fans Against the Right)

The event will take place at ‘BRICK STREET’ in the Baltic Triangle, the cultural heart of the city.  ‘BRICK STREET’ is at 44 Brick Street, L1 OBN With doors opening at 2 pm, ‘RESISTANCE STREET – LIVERPOOL 2022 will run through to midnight.

” Liverpool has a mighty tradition of solid resistance to fascism, racism and Right Wing energies. We are proud to be staging our first regional event with people from this brave, defiant city. This event is very much in the traditions of the original ‘Rock Against Racism’ movement and will combine music and politics with a focus keenly refined within the current volatile political climate. As the spectre of war once again looms over Europe and the whole world, events like this are unifying vehicles for all those whose priority lies within the spirit of peace and humanity.”

A superb line up of Liverpool musical talent is guaranteed with bands and artists performing including NIGEL CLARKE of DODGY, JOHN McGLONE and THE SOULS OF EMOTION, PETE HOOTON and KEITH MULLEN (THE FARM DJ experience), CANDY OPERA, LUCIGENIC, MODERN MARRIAGE, MC NELSON, IAN O’BRIEN, AMINA ATIQ, THE LIVERPOOL SOCIALIST SINGERS and others…

The entire event will be filmed for inclusion in the feature length documentary ”ON RESISTANCE STREET” currently under production in mainland Britain, Belfast and New York.

The film which contains historical reference and assessments framed in the contemporary social media and political climate, is an in-depth examination of the crucial role that radical music and culture plays in the battle against fascism and racism. Many renowned musicians, artists, writers, academics and activists have already contributed with others lined up in the film’s final three months of production.

ORS will premiere in London later in 2022 followed by a series of national and international screenings. Key participants in the Liverpool event will be interviewed on the day. The film’s trailer is above.

The ‘Soul Against Fascism’ team and a crew of Liverpool’s finest DJ’s will play music between sets throughout the day and during a closing eclectic dance session from 10.30 till 12. A vegan Caribbean food vendor will provide tasty nutrition to keep people going on what promises to be a very memorable day, in the great city of resistance.

With a big crowd expected on the day, people are advised to snap up tickets in advance. Tickets cost £10 and can be obtained via this Facebook page. All general inquiries concerning the event can also be made to the ticket hotline 07751 837704. Updates on the event will appear on the Facebook page and in the national and regional media over the coming weeks.