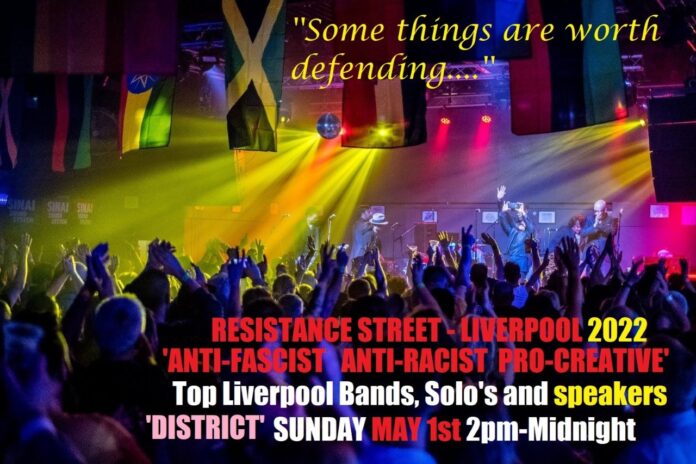 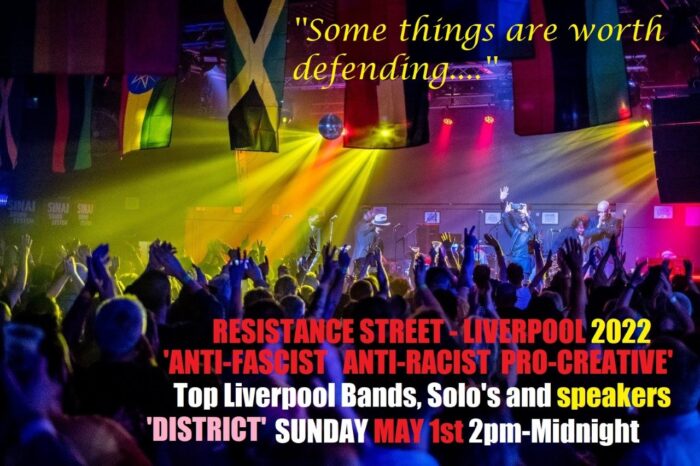 Brother Richard gives us the info

”We are Anti-Fascist, Anti-Racist, Anti-ignorance and pro-Creative.” The late Joe Strummer’s words in describing The Clash’s stances back in the late seventies, take on a new contemporary lease of life, as a new campaign organisation formed by members of the Facebook ‘Clash Fans Against the Right’ group, announces its first major regional Live Music event of 2022.

‘Resistance Street – Liverpool 2022’ will take place in the great northern city of resistance on Sunday May 1st. The significance of that date as an international celebration of unity and solidarity will not be lost on many and given Liverpool’s consistent stance against successive Tory Government’s on a myriad of issues, the ‘Resistance Street’ organisation believe the city is the perfect location in which to launch a year of regional Ant-Fascism-Anti-Racism live music event. 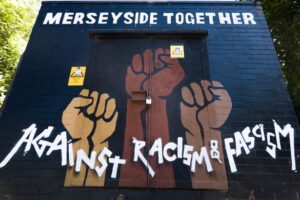 RS Chair, Clash confidante and Iraq ‘Human Shield’ activist Robin Banks said. ”We are delighted that our first major regional event will take place in Liverpool. The city obviously has a fantastic musical and cultural history and its people have stood bravely against Right Wing energies over the last 50 years. Not only in terms of opposition to various Tory regimes nationally, but in defending the city steadfastly from Far Right interventions and agitation over a very long period. Liverpool is an absolute bastion of radical political and cultural resistance and we are very proud to launch our regional programme of live music events there.”

The Liverpool ‘Resistance Street’ event will act as a blueprint for future events in Glasgow, Manchester, Brighton, the Midlands and London. The line up will include around 12 top Liverpool Bands and solo artists and will also feature speakers from a wide array of political and community organisations withi Merseyside. The musical bill is currently under construction and full details will be announced shortly.

The Merseyside ‘Black Lives Matter Alliance’ group will be represented by guest speaker Chantelle Lunt, the Chair of that organisation. Lead Community Officer for the national Football Supporters Association Andy Walsh, will also speak. Liverpool-based Rick Blackman, author of the critically acclaimed Anti-Fascist, Anti-Racist history ”Babylon’s Burning’ (Bookmarks Publishing August 2021) is another confirmed speaker along with ‘Unite Against Fascism’ activist, historian and author Dr Louise Raw. A full line up of political and community speakers will also appear in the near future.

The event will take place at Jayne Casey’s ‘District’ venue from 2 p.m – midnight. Situated at the heart of Liverpool’s ‘Baltic Triangle’ – Liverpool’s cultural Mecca – ‘District’ is a vibrant multi-purpose venue which hosts gigs, club nights, Festivals, screenings and cultural events. Live acts will appear between 2.30 and 10.30 p.m, followed by a 90 minute session celebrating various forms of dance music. DJ’s from ‘Soul Against Fascism’ will be joined by others playing an eclectic mix of dance styles, with short sets also between bands and speakers during the event.

In conjunction with Montaj Media of Southampton, The ‘Resistance Street’ team are currently producing a 90 minute feature length documentary film entitled ”On Resistance Street”. The film has been in production for 7 months and will be completed around May this year. In December last year a 3-Day shoot in Belfast in conjunction with Berserker Films (NI) and Executive Producer Richard Barclay, looked at the importance of the original Punk movement as an energy of unity across the sectarian divide. The shoot featured contributions from leading lights of the Belfast Punk scene, including ‘Good Vibrations’ founder Terry Hooley and many others.

A long list of notable interviewees are already in the can, these including musicians, writers, artists, academics and activists. The latest London interview featuring original Sex Pistol Glen Matlock, took place on January 12th and many more are scheduled for the coming months. The film takes an in-depth look at the importance of radical music and sub-cultures both historically and within the contemporary political climate, the role of social media in terms of energising Right Wing cultural appropriation and the evolution of the ‘Clash Fans Against the Right’ Facebook group into a real life Anti-Fascist-Anti-Racist campaign organisation.

An American shoot is scheduled for April. The Liverpool ‘District’ event will be filmed for inclusion in that documentary, along with interviews with key participants. Co-Producer Mark Vennis (”Here to be Heard – The story of The Slits”, ”Rebel Dread – Don Letts”, ” Slim and I – The story of Slim Dusty”) said “With its solid history of resistance to racism and Right Wing political energies, we are sure that the Liverpool ‘Resistance Street’ event will provide another powerful section of our film.”

Full national and regional Press releases will appear shortly. Ticket and admission information is currently being finalised. Current initial inquiries concerning the event and film can be made on ‘Resistance Street’ 07751 837704.