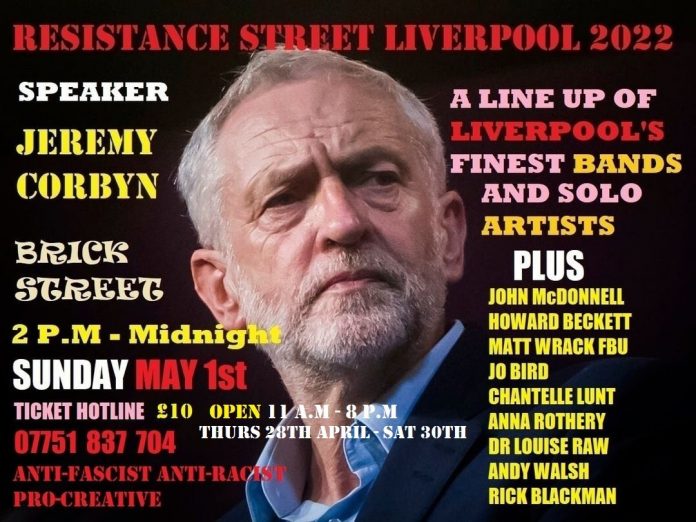 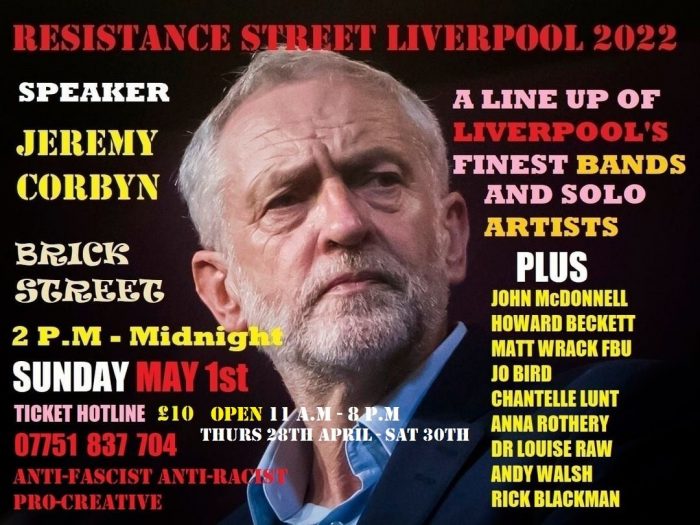 On Sunday May 1st, an internationally symbolic date, the city of Liverpool will be rocking against fascism and racism at Brick House in the Baltic Triangle area of the city…. writes Richard Chorley from Clash-Fans-Against-the-Right

RESISTANCE STREET LIVERPOOOL 2022 will be welcoming JEREMY CORBYN, who heads up a raft of political and community based speakers. On the music side of things, a fine line up of Liverpool bands and solo artists will take to the stage with doors opening at 2 p.m. The event will run through until midnight. The bill includes NIGEL CLARK frontman of DODGY, PETE HOOTON AND KEITH MULLIN – THE FARM DJ EXPERIENCE, JOHN McGLONE AND THE SOULS OF EMOTION, AMINA ATIQ, MATT McMANAMON, CANDY OPERA, MC NELSON, LUCIGENIC, MODERN MARRIAGE, IAN O’BRIAN, THE LIVERPOOL SOCIALIST SINGERS and GERRY POTTER.

The main event will be staged outside beneath a giant marquee, whilst an inside room, will feature Soul Music from the SOUL AGAINST FASCISM DJ crew.

The event will be filmed for inclusion in the 90 minute feature length documentary ”ON RESISTANCE STREET”, which is an in-depth examination of the role which radical music, art and culture plays in the socio-political arena. The film includes contributions from a wide range of renowned Musicians, Solo Artists, writers, activists and academics. Containing an original soundtrack featuring around 20 bands and artists, the film will be released later in 2022. It will premiere in London, followed by international film festival slots and specialised screenings. The May Day Rally, taking place in Liverpool City Centre at 12 noon, will also be filmed for the documentary.

Chair of RESISTANCE STREET, Clash confidante and Iraq Human Shield activist ROBIN BANKS said ”We are delighted to announce Jeremy Corbyn’s appearance at our Liverpool event. His relationship with the people of Liverpool is a very special and symbolic one. Liverpool is a major bastion of European resistance to Right Wing political energies and ideology. In this deeply worrying moment on the international stage, we believe people need events and gatherings like this, wherein music and politics can combine to provide solidarity and inspiration. When The Clash, Steel Pulse and others took to the RAR stage in 1978, it was a very important moment which touched the hearts and minds of a generation. Today, with the legitimisation of racism and evermore authoritarian government policies and bills, the situation is even more serious than it was back then and radical culture has to make a stand. On top of all that we now have a war, with gravely serious possible consequences for the whole world. As such, it is our privilege to provide this platform on May 1st in Liverpool.”

Advance tickets for the event can be purchased via the TICKET HOTLINE that appears on this page. A previous preorder period has ensured much demand. The HOTLINE will be open between THURSDAY 28th APRIL and SATURDAY 30th APRIL. People wishing to secure their entry to this event are sincerely advised to purchase advance tickets, priced at £10 each via that booking line. 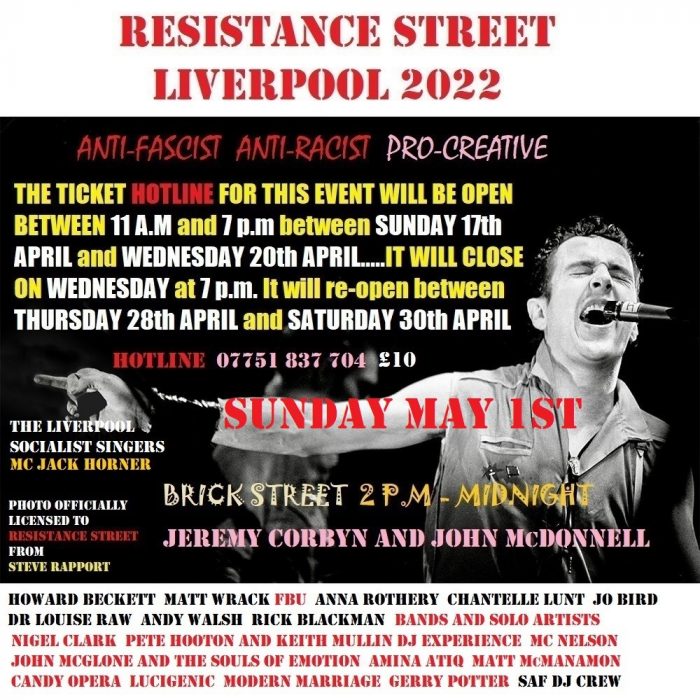