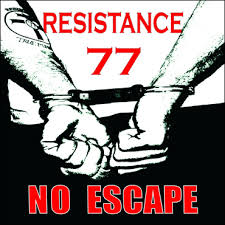 Resistance 77 are a street punk band from Notts who have honed the form down to a perfect fiery concoction of frustration, anger and energy with the kind of great yob choruses that have made Cock Sparrer kings of the current scene but with an added melodic touch that makes them really stand out.

They have been around a good few years with various line ups but have made good use of the time learning how to make their records sound huge with a great production and a crafted approach to their songwriting that sees the buzzsaw guitar wall of sound twist and turn with an intelligence and some great song writing touches without ever letting go of the excitement.

Street punk is a very over populated genre with a countless stream of bands but the band, formed in 1979, have stepped up and the album is a great example of the potent power of this music that somehow manages to sound fresh and bursting with life that proves that there is plenty of life left in the punk rock beast.

There are so many stand out tracks it’s hard to pull one out but the anti war Drop The Bomb has all the urgency of the early Clash with it’s great backing vocals and the manic buzzsaw pop thrill of Generation X and the potent power of the great early British punk 7 inch singles and remembers that the pure pop thrill of the great early punk rock wars was such a key part to the equation.

With end to end great tunes and a really sharp and great sound this is easily one of the best punk rock albums released in the past few years and deserves to see the band break out of their cult status.