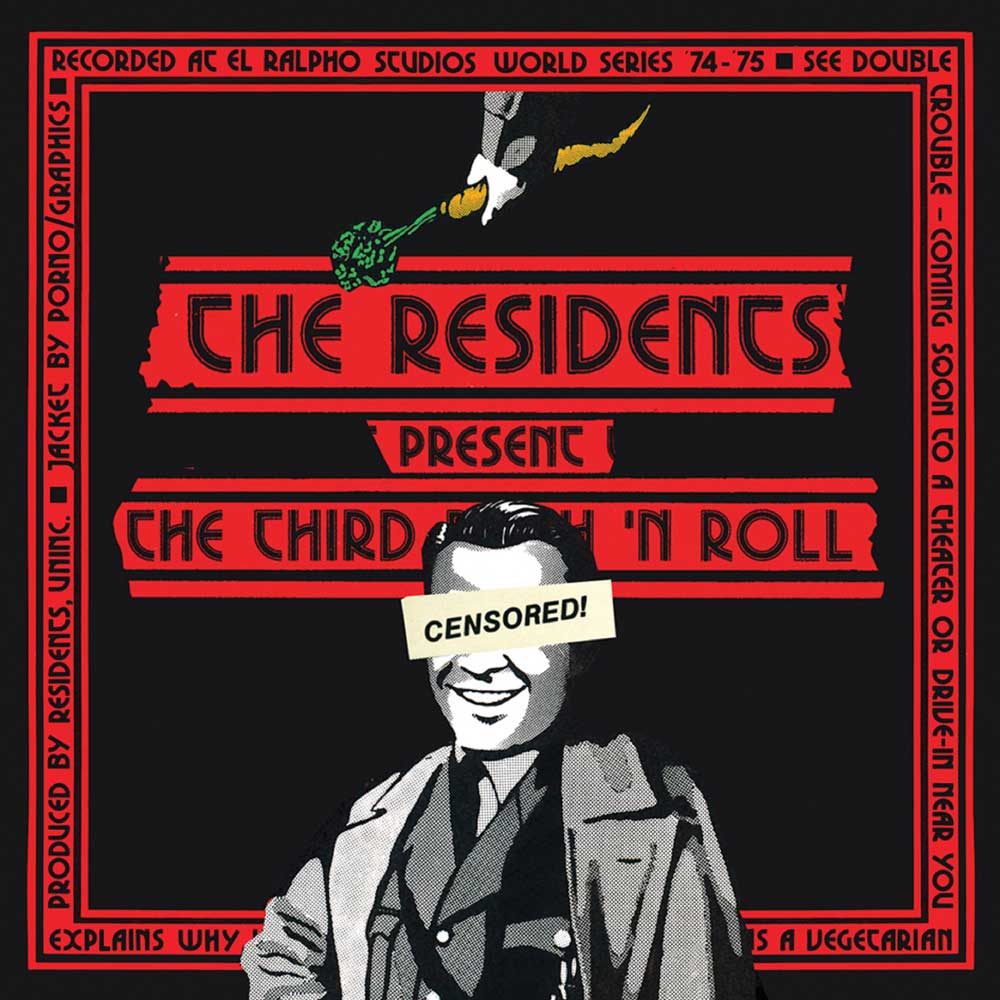 Reissue of the controversial 1976 album over two discs with many bonuses including the full “Oh Mummy” show taped at the Rather Ripped Record Shop in 1977. Ian Canty listens to the sound of high times in the mid-60s given a touch of the Residents’ own eerie magic…….

After Meet The Residents set the world aflame err, well gradually clawed its way into the consciousness of the more informed music fan, in 1974 the Residents appeared to hit the wall. A food fight between the band apparently got out of hand and the Not Available album that was recorded in its wake remained unreleased for another four years (or, as was said at the time, “until everyone forgot about it”).

A vague concept (a first for the band, but concept albums would loom large from then on in their canon) began to form of a critique of the music business, which would eventually become Third Reich ‘N Roll. They commenced producing the music for this project by playing along with 60s Pop hits in their own highly particular way, then removing these backing tracks to see what was left underneath. Slowly, these versions developing into two long tracks with the band’s contributions being segued together into a couple of movements of about 18 minutes apiece.

There is not too much doubt that the band courted controversy with the album’s packaging. On the front Dick Clark, the host of the US’s premier Pop show American Bandstand since the 50s, was pictured in cartoon form. So far, so good. But he was also wearing Nazi uniform and holding a carrot whilst surrounded by dancing cartoon Hitlers in both male and female dress. The sleeve also featured the various members of the Residents wearing huge swastikas and Rather Ripped Records, who had supported the band from their early days, placed a similar display in their window (which was quickly removed after an outcry locally). The, ahem, “difficult” imagery that was employed was unintentionally exacerbated by the promotional film they made wearing outfits cut up from newspapers – the conical hoods that were only made that way because of simplicity resembled outfits worn by a certain American far right organisation – a long way from what the Residents intended. Of course shock tactics were all the rage in the Punk scene of 1976 and this satire on 60s Pop and 70s music big business fitted into the general thrust.

Their sentiment seemed to me to be in the same mode as the Jamie Reid designs for the Sex Pistols later on in the dying days of The Swindle, with also the same anti-music business sentiments (though Reid’s barbs were squarely aimed at Virgin). There’s the weird link to Lenny Kaye’s Nuggets compilation too, which featured some of the source material of 3rd R ‘N R in their original incarnations. Perhaps the Residents were saying here that the original, unconscious thrill of Pop had by the 70s been taken over by the moneymen, cynically exploiting the “teenage dream”? Or that it had always been the case and was also a case of large scale mind-control? Well we will never know because they’re not telling. So we might as well look at the two tracks that make up the album in a bit of detail.

Commencing with a German language version of The Twist, Swastikas On Parade wastes little time in hammering home the concept. After the incongruous inclusion of America’s Horse With No Name we hear aircraft swoops and a little later a frantic sax mixes it with machine gun fire in between the off-key (and that’s putting it mildly) takes the likes of the Syndicate of Sound’s Little Girl and Talk Talk by the Music Machine. Wipeout and Telestar fight a duel to the death whilst a farting synth takes us through the out door. Working as a quiz as well as a record you can try and name the familiar but disjointed songs that are given an airing alongside the Residents’ own individualistic interjections.

Going onto Hitler Was A Vegetarian, there is a slight difference, a little more restrained and less of the warfare noises. It’s My Party gets the perspective of a (seemingly) drunk party thrower, Light Your Fire is given a severely different tinge and Rock Around The Clock is repositioned with a chiming synth treatment. They end with Hey Jude, which points the immediate way forwards and of course, backwards too. Both tracks make up an album which is uniquely baffling and catchy, familiar and strange. Fun and unnerving, both a nightmare and a dream. Though the versions are not exactly what you would call respectful, I think it is not beyond the bounds of possibility that a love for the simple joys of these records may have led to the Residents wanting to debunk them, because of their then status of industry “golden oldie” cash-cows and general myth surrounding “The Swinging 60s”. But what do I know?

As for the bonus tracks on disc one, after the release of Third Reich N’ Roll the Residents span out two vital singles and both a and b sides are included here. The Satisfaction single was a logical progressing from the album – this time putting one of the 60s key anthems through the Residents own wall of noise. The wilful destruction of the Stones’ totem chimed in with the coming Punk wave that was gaining speed at the end of 1976 when it was released. Along with the proto-Electro Loser = Weed (which oddly was the only time the Residents resembled Devo a little – when you consider that they both had a go at Satisfaction around this time) it made for great record. Or if you were the reviewer of the single from Trouser Press magazine “the most determinedly repellent music I’ve ever heard”. Bearing in mind the stir the Pistols were making at the time, that review probably worked in a reverse way to what the reviewer had in mind.

Even better (to my ears anyway) was to come with the terrific Beyond The Valley Of A Day In The Life/Flying 7″ inch. On the top side they jammed together a load of (the Residents’ favourite whipping boys) Lennon/McCartney songs, mixed in with their own musical cuts. There’s not too much doubt for me that this was the ground zero of sampling and it works wonderfully, all the way to Paul McCartney saying “Please everyone, if we haven’t done what we could have done, we’ve tried” from one of the Fabs’ fan club Christmas discs. Flying, actually a Beatle cover song, repeats the trick with one of the Residents maniacally repeating Macca’s plea.

The real rarities though on this one are the five German Slide Music Parts 1 to 6 tracks (missing Part 3! They also do this to us!). These fragments are generally piano-led, the first one having something of the pub Joanna about it, though my pick would be the slowly probing bass and keyboard jam with electronic bleeps that makes up Pt5. Overall they don’t particularly fit with the accompanying material with not being covers, but they are interesting to listen to and different to most of the Residents work from this time.

Disc two delivers what Residents fans might well consider the motherlode: their 1977 in-store appearance at Rather Ripped Records in Berkeley in its entirety. At that gig, rather like the album, they played along to a backing tape (which is also included separately) and it was apparently a chaotic event, with the band struggling to play whilst bound in plasters. Nevertheless it is interesting to hear today and the band do receive a pretty good reception from the assembled crowd. Bits of Satisfaction and shards of Third Reich glint through the mayhem and the half hour performance climaxes with the Kick A Cat refrain from the first single. Chaotic but fun, someone shouts “no more” at the end to his own amusement, but it appears most enjoyed the spectacle at least, if not the music.

Following on from that are full versions of The Letter from 1982 and a slightly different live version of Satisfaction from a year later. Into the 90s we get Land Of 1000 Dances in a near-House mix and a less abrasive Loser = Weed from four years ago. When the Icky Flix DVD came out new music was added to their Third Reich ‘N Roll film and that is reproduced here, with a live version from 2001 as well. Almost finally, we get a lump of Third Reich outtakes which include Psychotic Reaction with a sort of Joe 90 wobbly electronic noise added. There are also a couple of uncredited radio ads for the Oh Mummy show, which are nice to have from the point of completism.

All of this along with detailed sleeve-notes adds up to another thorough job being done on this crucial album in the development of “North Louisiana’s Phenomenal Pop Combo”, a nice follow-on from the Meet The Residents reissue (reviewed here). With Third Reich ‘N Roll the Residents revved up their monster machine and aimed squarely at the bloated belly of the music business, in much the same way 1976 Punk was meant to do, but mostly didn’t. Their distaste was clear from the controversial packaging onwards and as the years have gone by although the shock tactics employed seem naïve, Third Reich ‘N Roll is still an intriguing listen and a savage satire on empty headed Pop Music being run by hard-headed businessmen. Things haven’t changed that much.