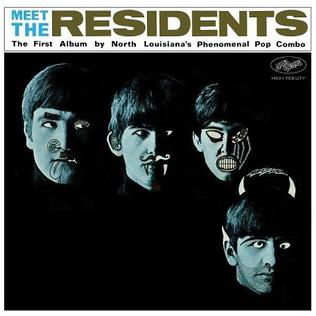 2CD reissue of the Residents classic debut album, with both the mono (1974) and stereo (1977) versions plus contemporary bonus tracks…….Ian Canty stands back in wonder on hearing again “the groove that should not be”….

Considering what a brain-boggling experience hearing the Meet The Residents still is in 2018, one can only speculate how one would have made sense of it at its original time of release in the Post-Glam world of 1974? A befuddled reaction would imagine at first. How would you make sense of this record? Because there is certainly sense there. What at first could seem like a random array of sound is actually, when you really listen, a painstakingly put together riot of ideas. Everything “fits”, even if there was a far wilder variety of sound on offer than literally anything that had gone before. If at the time David Bowie and Roxy Music were considered “out there” (and I’m not having a go at them. They were, of course, outstanding), exactly how far out were the Residents?

Hearing Meet The Residents at all at the time would have been difficult though even if you had a ken to. It was only pressed in a run of 1000 originally and the record apparently only sold a mere 40 copies in its first year of release. But hearing it, in all its many-headed glory, would surely have been life changing, or at least enhancing. Though this was their first officially released album, it had been a long road for the Residents to get even as far as Meet… Starting out in the mid-60s, they relocated from Louisiana to California and then onto San Francisco making various stabs at recording albums along the way, even getting as far as sending a copy of one to Warner Brothers, which gave the band its name when it was returned to “The Residents”.

The Santa Dog set of two seven inch singles which came out at the end of 1972 was their first recording made available to the general public. A bizarre Christmas offering, it is included here in its entirety as bonus tracks. Each selection was credited to different artists, namely Ivory And The Braineaters, Delta Nudes, the College Walkers and Arf And Omega, but truly this marked the beginning of the Residents. After this record and they began working on their movie Vileness Fats, as usual for the Residents this concept was way ahead of its time, a video album. It did not come to fruition ultimately, but the music they had concocted for it would make up the basis for Meet The Residents. Important characters in the Residents narrative like Chilli Willi and the Red Hot Peppers guitarist Phillip “Snakefinger” Lithman and the mysterious N. Senada (though it is worth remembering the phrase en se nada means in himself nothing) arrived in their orbit around this time as well, which undoubtedly gave them added momentum.

Clad in its subverted Beatles sleeve, Meet The Residents was released to an almost totally oblivious general public on the 1st April 1974 (not sure if that is exactly the truth but it fits). Despite the legendary poor sales, over the years its influence has slowly shown its hand and in time it has come to be recognised for the ground-breaking record it surely is. But ground-breaking doesn’t automatically mean fun does it? Thankfully Meet the Residents is as playful as it is inventive, flying from one style to another and as a rule changing direction in less time than it took to type this sentence.

The music contained is occasionally unsettling for certain and you need to be at least a little adventurous in your listening habits to bear with it, but if you do, it still has the power to take your breath away with the sheer number of ideas expressed and buried away are even some catchy tunes (even if they are somewhat brief). It’s the groove that should not be, but is and we can be thankful for that. Always recording at their own studios, there was inevitably a little roughness in the sound, but the sheer force and nerve of the band generally overcame any aural shortcomings.

You could say the first six tracks pre-figure the Residents 1980 Commercial Album, in that they are short fragments, but they segue into each other in a way that makes it almost impossible not to see them as one whole piece. Especially bearing in mind the frantic shifts and jarring rhythms on some of the longer tracks later on the album. An almost unrecognisable version of the Lee Hazelwood/Nancy Sinatra classic kitsch hit These Boots Are Made For Walkin’ gives us a puzzling introduction to the LP and the repeated phrasing of Smelly Tongues would help it go down as in the annals as an early Residents triumph.

A Jazz influence hangs over Skartz, but that is soon subverted to the Residents’ own peculiar ends with rumble and hi-hat taking us on a sorrowful and twisted beat poet journey. Infant Tango has the most bendy, funky bass line that actually threatens a straight-ish Rock song until horns and voices burst through to chuck a spanner in the works. Even so it represents the first (but far from the last) time the Residents approached Dance Music. N-ER-GEE (Crisis Blues) is a classic slice of early Residents noise, with the 10 minute duration including loops, off-key choral arrangements, electronics and what sounds like tap dancing! Whatever it is, the time flies by and when the LP climaxes by telling America to “go home” we’ve reached the end of one of the few truly original platters in music history.

The bonus tracks on disc one include the aforementioned Santa Dog record in its entirety, with Fire and Aircraft Damage (with its Kick A Cat Today refrain that wormed its way into Resident history) being the pick. There are also recordings that emanate from the same timespan. A straighter, but still weird version of Boots features as does a different take of Spotted Bean Pinto (suffixed as Tuesday#5 – being the Residents the enigmas pile up rather than being solved – we have Tuesday#1 to #5 without Tuesday#4!), the Exotica and Operatic tinges of the original being overlaid with straining vocals and a spacey feel

Come 1977 and the growing (in)fame of the Residents plus the slightly more favourable musical climate offered by the New Wave, the time was ripe for a reissue. Because of the grumbling of EMI and Capitol about the defaced Beatles cover, a new sleeve was required, this time with a cartoon of the Fabs with fish heads. Also, this time around it came in a stereo mix, which clipped over six minutes from the running time, with most tracks losing a little content (but Skratz and Smelly Tongues getting a little longer somehow). The Residents were never afraid to fiddle with their back catalogue, sometimes to chagrin of their fans. It’s a concise take which wheedles some of the more hidden elements from out of the somewhat fuzzy mix and it sounds pretty good to me.

As with the first disc, we have some intriguing extras on this one too. On Overlay At High Speed they come across like a malevolent Chipmunks, but Poisoned Popcorn is actually a touching and sad song of regret played reasonably straight (for the Residents). They could always conjure great beauty as well as the noise and savage cuts, as Rest Aria had proved on the LP proper. This disc’s conundrum are the five 1-10 (With A Touch Of Eleven) percussion filled tracks, part eight of which features a sample of Sgt Pepper. This would be a portent of their next album Third Reich Rock & Roll and the Beyond The Valley Of Day In A Life single (a review of that reissue is coming soon).

So what we have here is a pretty definitive audio document of the early Residents from 1972 to 1974, with some great sleeve-notes which of course may or may not contain the red herrings that we have come to love the band for. Fans of the Residents will enjoy this new edition, it builds on the indispensable original Meet The Residents LP (in both its versions) with some great unheard tracks as well as the phenomenal Santa Dog single. If you have never heard Meet The Residents before I envy you, there’s a universe of fun ahead for you. One of the most intriguing, innovative and puzzling records of all time has been done justice here.