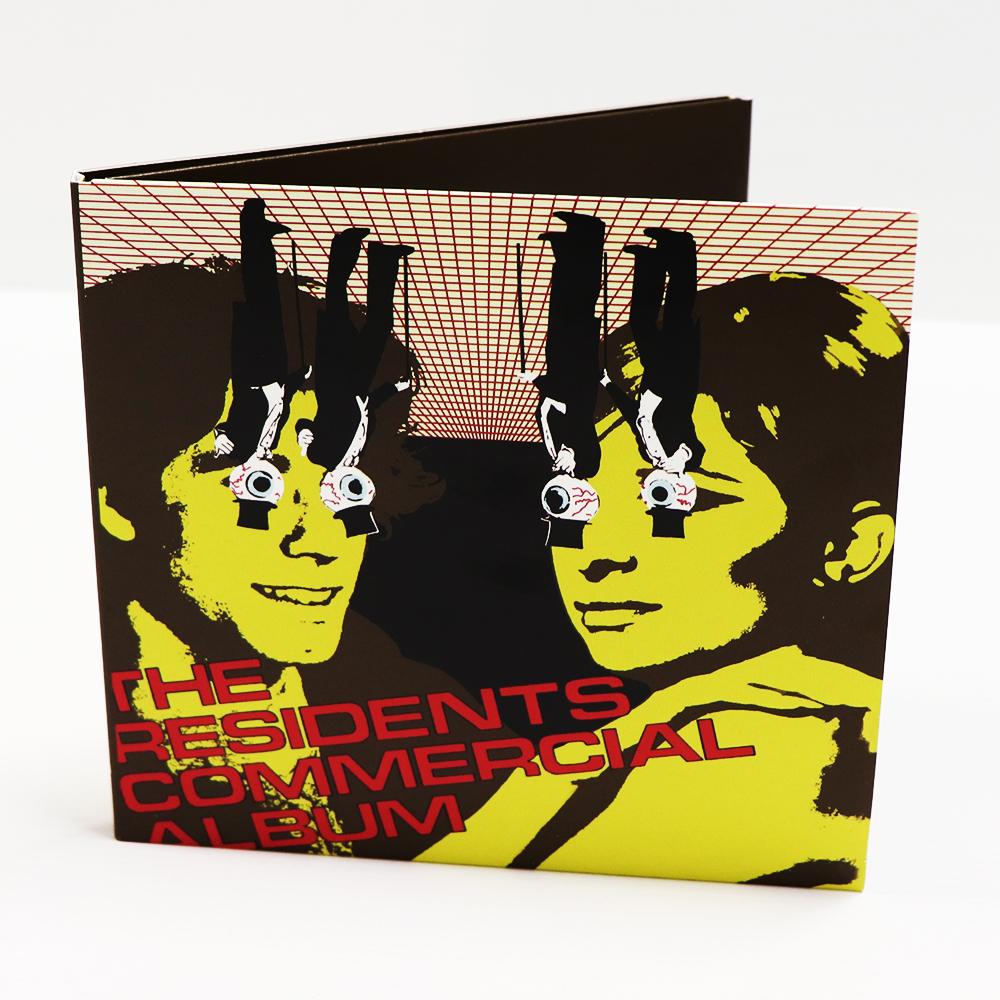 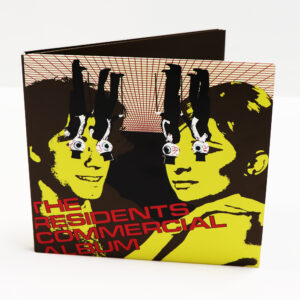 Expanded edition of the Residents’ 40-track 1980 album, which featured contributions from Lene Lovich and Andy Partridge of XTC, along with uncredited turns by Brian Eno and David Byrne. LTW’s Ian Canty remembers a time when the Residents met the pop world halfway – well perhaps more accurately a third of the way.

By the time The Commercial Album was released in the latter part of 1980, the music world had changed beyond all recognition in six years. That far back, the idea of a band like The Residents, whose identities remained unknown and made strange noises like no other, could “cross over” was the stuff of dreams. But it happened to the extent that their records would be issued on a major label on the back of a full publicity campaign, with their videos even appearing on national TV on The Old Grey Whistle Test. Ralph Records tied up a distribution deal in the UK for this album and accompanying single, (which featured six album tracks plus a couple of new songs Shut Up, Shut Up plus And I Was Alone) through Pre Records, the “New Wave” arm of the Charisma label.

The Commercial Album was promoted by adverts in the music press and I can remember seeing them in most of the inkies (one is reproduced in an informative booklet which accompanies this reissue). In Residents-world it is prudent not to set too much stall on chronology – things are never that straightforward. You can’t talk of this LP, or indeed any one in their canon, of being a follow-up, just because it was released directly afterwards. Normal rules don’t apply.

We can be fairly sure that The Residents worked on these pieces from September 1979 onwards. Before that, they had laboured on the Eskimo and Not Available albums, the recording processes of each taking its toll on the band. Perhaps being able to finish the short compositions that made up The Commercial Album gave them an instant sense of fulfilment, sorely needed after the testing and drawn-out circumstances of the production of Eskimo and Not Available and also provided a welcome break from the intensity and stress of those sessions.

One thing is for sure and that is that this record would be The Residents’ most commercial; the album title wasn’t arrived at by mere happenstance. Basically, it boils down to the brainboxes working out that the first minute of your average pop song sets out what the record was all about and the rest was just repetition. Also a minute was about the same length as an advertising jingle, so they concocted 40 songs of around of about one minute’s duration, which fulfilled both criteria, with the advice that the listener should play them three times in a row for maximum effect!

I’m not sure if many purchasers of the record obeyed these instructions (I have to admit I didn’t), but the thing that is certain for me is that this is a truly great album, one of The Residents’ finest. Another ace in The Commercial Album‘s pack was that they roped in Lene Lovich and Andy Partridge to participate and this encouraged even some of the less adventurous “new wave” listeners to take a punt on it, thereby unwittingly launching themselves on a veritable voyage of discovery. The interlopers worked their way into The Residents’ own peculiar vision well, with Lovich’s vocal on Picnic Boy hugely memorable and on Margaret Freeman some great off-key guitar by AP adds to the growing tension of the piece.

Of course, the tunes contained on this LP presented a leap of faith that the average pop fan could never have even attempted, but that is not to get away from how perfect it is. At 40 tracks, it would take me a long time to write up every one (with the bonuses across the two discs we’re now up to 76!) and it does seem a little silly to pull the odd minute out and “say look at this”. One of the strengths of The Commercial Album is that every time I’ve played it, something new seems to makes its presence felt. Constantly new delights are revealed, rising to the surface, be it a micro-sized twisted tale or a killer rhythm, buried away under the multitude of ideas.

So probably best to just detail what caught my ear this time round. Amber, along with Picnic Boy, has always been a favourite of mine, and the twisted version of Exotica that The Residents squeeze into 60 seconds on it is both gorgeous and a little queasy feeling too. Dimples And Toes is as close as this record gets to the notion of rock n roll and if you listen very carefully, you can just about pick out David Byrne on backing vocals on Suburban Bathers (both he and Brian Eno make uncredited appearances, with Eno contributing keys to The Coming of The Crow). The weird freak show procession of Phantom Thrills and Love Is has a solid R&B base that quickly goes weird in the most delightful way – Booker T and the MGs fed through The Residents’ particular strain of strange.

Moisture veers from jazz to an African high-life rhythm, a very dreamy, David Lynch-style feel. The Residents dip into psych-pop with strings on Fingertips and Loneliness slightly recalling Procul Harum! Not a bad thing that, but of course being by the Eyeballs From Hell there’s a sense of unease that Gary Brooker and his gang, for all their strengths, did not possess. La La recalls Joe Meek’s early electronic experiments and the very sad sounding The Talk Of Creatures is a winning combination of strings, piano and voice.

Along with the two non-LP single tracks, we get nine previously unreleased recordings on this disc too, plus their one-of-a-kind Ramones cover, We’re A Happy Family and an incredible radio ad that gives us a second or so of each track, introduced by a voice-over man. The unreleased tracks, we must assume, are contemporaries of The Commercial Album and they do share a similar feel, even if a couple are of much longer duration than the minute mark. This does lend weight to the suggestion that the tracks for the LP were original full-length songs, edited down to a minute. For example, Elevator Lady is a longer version of Ups And Downs (possibly the pre-editing-down process to fit on the LP?) and motifs that were to recur on the album are dotted about here and there among these auxiliary efforts.

Their tune entitled Kraftwerk is interesting too, in that it shows that The Residents were not working in isolation and knew their peers. It also, to my ears, recalls that band in their Radio-Activity period. The synth-pop smashes of Electronic Elaborate Waste are great, but almost over before you could say the title, with Roscoe’s Righteous Rodent (great name for a song too) being a fast cracker in the same mode.

Going onto to the second disc, we have some alternate versions, rehearsals and live work, including Commercial Album Suite, a 2005 cut that brings together LP favourites into one big chunk. Being the proud owner of the excellent Commercial Album DVD that was released about ten years ago, I was pleased to hear the recuts of Simple Song and Moisture, as I found it near impossible to locate them as Easter eggs on the DVD! Red Rider takes a more choral path in this state and Simple Song has a good bit of funk guitar leading the way. The track Boy In Love is a bit of a mystery, no notes about when and where it was recorded. It’s unsettling but beautiful, and very much in The Commercial Album mode, if a bit longer than 60 seconds.

Die In Terror works very well, live from 1986, and Easter Woman from the same vintage evokes a cool near-jazz atmosphere. The reggae styling on Love Leaks Out from a 1982 rehearsal is a bit of a surprise. This disc ends with three live songs from 2015, which lean quite heavily on guitar – they’re still pretty good though.

In many ways, The Commercial Album is the most fully-realised and accessible document The Residents have managed, so far at least. It is shocking in how catchy some of the pieces were, but retaining all the playfulness and eerie storytelling, even it mini-bite-sized form. The surfeit of ideas that the band constantly had on the go were instantly utilised here and the short pieces gave them an easy outlet after the drawn out Eskimo sessions. It was the complete opposite of the last LP in terms of track length, but in some way was also a logical progression too. Both albums represented a move away from the total noise of their Satisfaction cover and both albums produced little nods that they were still working against the record business in spoofing rock operas (Eskimo) and the hit single obsession of the major labels (obviously The Commercial Album).

But what important is what The Commercial Album gives you – like a delightful, but inscrutable puzzle. Once you think you’ve worked one piece out, something else will surreptitiously jostle its way into the front and stump you. As you would expect from The Residents, this is a constantly entertaining, occasionally baffling, but always enthralling record. This expanded reissue gives us a fuller picture, with The Residents content to dabble with their creations over the years, something they have never been afraid to do. This edition nicely enhances what was a fine album already.