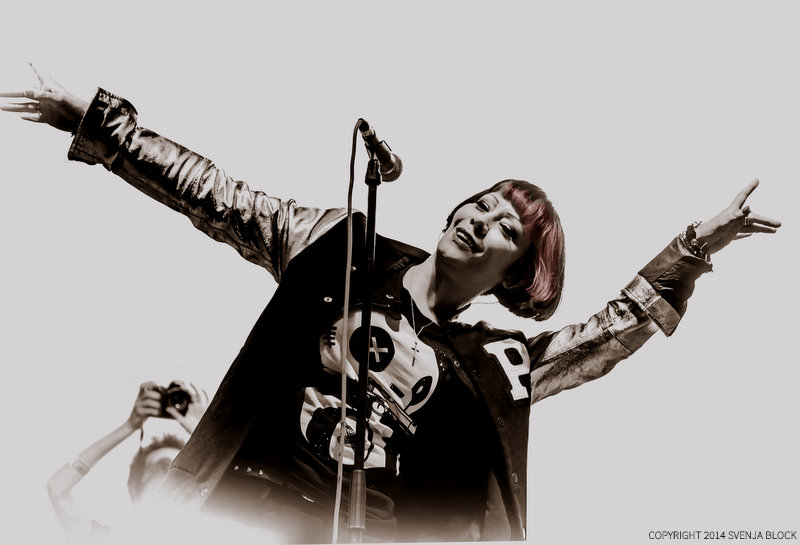 No stranger to Pride Festivals with a string of them under their belt since 2009, she put the idea forward and fought hard to make it happen in their now hometown, Brighton.

With the true Punk D.I.Y attitude, if you want something to happen – you make it happen – and while you’re at it you may as well make it brilliant!

Kenelis – that is Mel Sanson, also played a major role, not only playing her own gig, but stage co-ordinating and hosting and to top the night off, hitting the stage one more time to join great friend Saffron and great talent Republica for another round of ‘Drop Dead Gorgeous’.

Where do these pint sized, power packed, punk rock princesses get their energy from?

Probably from the vibe of such a great event and achievement.

2014  ‘The Q Live Music Stage’ is born, and ‘Republica’ full of PRIDE to headline the debut.

Kenelis are now Brighton based and already award winning, kicking off their set with ballsy rock out, ‘We could Die Any Minute’.

Immediately Mel coercing the crowd to join in, come closer and get involved.

Husky and gorgeous, full of charisma and charm, Mel Sanson belts it out.

This band has seen many line – up changes over the years, but that just keeps it fresh all the time.

Currently, Jack Rowan – on guitar, not your typical low hung rock guitarist but rocks it all the same – too good looking for his own good in my opinion, Dan Ely chugging the bass seems to spend a lot of the time up in the air thrashing around, no mic required!  And Alec Greaves is so solid on the kit –  He’s just doing his thang maan -! The band are really tight despite their individuality, freeing  Mel up -to glide, jump, banta, and basically rock out ‘To Her Hearts’ content, safe in their hands.

Straight into ‘Sick’, this is an older track taken from album ‘Fake’, released in June 2011, but you can’t get sick of this one, catchy and melodic, then launching into a  heavy old scream out .

Mel takes a few moments to welcome the crowd and big up  the birth of  ‘The Q LIVE STAGE’ before building up into a cover of Foo Fighters track ‘All My Life’, quite a courageous move to cover Foo Fighters, but enhanced  with this gruff girlie spin and well appreciated by the ever building sunset crowd, we love it !!

This band, although should be taken seriously, don’t take themselves too seriously, quite obviously having as much fun up there as us lot down here, at times Mel will do something bonkers, like hit the pit and rock there for a bit, ensuring even more so that everyone is embracing  the vibe, and getting involved.

For a mere half hour set, they certainly know how to cram it in.

Moving on – ‘Moving to Brighton’, a recent track from the latest EP – release ‘MOVE’,

is a well crafted proper grunge rock track, lyrics like “to get what you want you have to lose what you have”- is classic KENELIS – Mel style, sometimes obvious and profound and other times left to your own perception.

Referred to as Grunge, Punk and Alternative Rock , now we can all  see why.

As the sun is setting, the seagulls, and the big wheel still circling in the background, Kenelis round up their set up ‘With Scars’, and top it with yet another “Scream If You Wanna” – in your face track- ‘Prodigy Witch’ – this band is a must see 2014 – and beyond, and  what better warm up for the eagerly awaited Republica – what a magical day so far.

Republica… well this band is definitely BACK!! and ‘Ready to go …’

Earlier this year the band was conquering a Nationwide sell out Arena tour, with a few festivals in between.

The force that is Saffron at the helm with trusted band/ co writers – Tim Dorney  on the keyboards and technical genius behind this outfit plus Jonny Male aka Jonny Glue, taking his usual spot on guitar, and bv’s .

The chemistry in this band is electric, emphasised even more since the new addition of young drumming prodigy Connor Lawrence, who joined in 2012 – this lad is a human click track !

The band take their spot and get set with the technical check stuff before Saffron joins.

Her presence absolutely commands the stage and where better to start than the beginning.

Kicking off the set with ‘Bloke’, one of the early releases from 1994 .

Snappy beats, with great fat heavy guitar riffs, technical keyboards, swirly plinks and pulses running through, even before the distinct voice of Saffron kicks in, the crowd join in the bouncing as she occasionally bashes the tambourine.

No time to breathe before we rush into ‘From Rush Hour With Love’, this track is quite well known because it has been around since 1998. It was a top 20 hit, first released as a 3 track EP, produced by Andy Gray and also featured as the opening track on Republica’s second full length album ‘Speed Ballads’. ‘From Rush Hour With Love’ still sounds fresh and is executed with the same panache as all those years ago,  a classic song everyone should be able to relate to (side note: go check out track 3 – ‘Clone’ is mindblowingly totally on it…not for the fainthearted).

‘Out Of The Darkness‘, (a retake on their first release ‘Out Of This World’ from 1993) and I suppose the reason they continued from the get go – if you write a dance track this great to start with – you have no choice but to continually evolve with the result always sounding current.

The thing I loved about the set is that the songs equally cover the span of  Republica’s career; the perfectly placed  ‘Drop Dead Gorgeous’, millions of versions out there worldwide because it’s so catchy and it was always embraced as an anthem from the gay community, too.

To see a live version…well that really is special, to catch it at Pride is overwhelming (to get an encore with gorgeous Mel Sanson – LUCKY!)

‘Holly’ – musically uplifting as ever and with very clever use of the English language.

The song ‘Millennium’  from the album  ‘Speed Ballads’ is a heavier track with more guitars and whacky keyboards and has the band and crowd alike rocking more than dancing for this one .

Before we embark on the latest material such as ‘Hallelujah’ which has not yet been released but is executed and received as if it had been around from the early days (I personally think this is the comeback track, not just the lyrics but the energy).  I can see this one absolutely storming everywhere as they re-build  their momentum, so Poptastic live – ( dare I say it) gives the ‘Scissor Sisters’ a royal run for their money.

Pausing only for a moment to introduce their latest physical release ‘Christiana Obey’ (March 2013), the title track from the current ep consisting of 8 tracks (4 fresh songs and 4 remixes -Tenek / Andy Gray / Disobedient /Republica Radio Edit) whilst the band with their usual modest, take it in our stride attitude, get set .

These haunting vocals and enchanting lyrics, slow the set down, but only slightly. Amazing live with an amazing video too, it showcases that Republica have plenty more in the tank.

This band delivers, whatever age – era – genre you are. Republica are one of the most exciting, energetic futuristic punk rock ravers, you’ll ever come across, be you an older original Punk , Techno Raver, Rocker, or a Barfly, this band speaks volumes of our era.

‘Ready To Go’, commercially the Don, used for over 300 various ads, stadium anthems, film features etc, needs no introduction, as the crowd have been eagerly awaiting this one and we all know it immediately.

This favourite got everyone unanimous in letting their hair down. Partying like there’s no tomorrow, such mutual adoration, Saffron is obviously humbled, proving this band are emotionally connected, and not just showing off their musical talents. This is intellectual Punk featuring top notch punchy lyrics with beats and harmonies, great guitar riffs whilst also utilising the technology all the time; it is beyond space age! Although they’ve been around for 20 years now, they still have the power to be so fresh and inspirational which shows they are the epitome of what you would want from a band, to go  see them live is a no brainer; to see them at the first Q Stage Brighton Pride was a privilege. Many thanks  for the insight and the vibe,  and of course Team Kenelis, & Co for making it happen . CoSmiC! * WoW ! * FaNtAsTiC! *FaNx ! X

‘Saffron can also be seen in the B.F.I accredited British gangster film ‘Looters Tooters and Sawn Off Shooters’ by the King Brothers out Sept.playing the role of Detective Sergeant Ruth’

Here’s link to Christiana Obey on youtube for Svenja …

Here’s link to Drop Dead Gorgeous on youtube for Svenja..

Here’s link to Ready To Go on youtube for Svenja..