Home Music Reviews Album Reviews Repo Man: I Can Live With It If You Can, Son –... 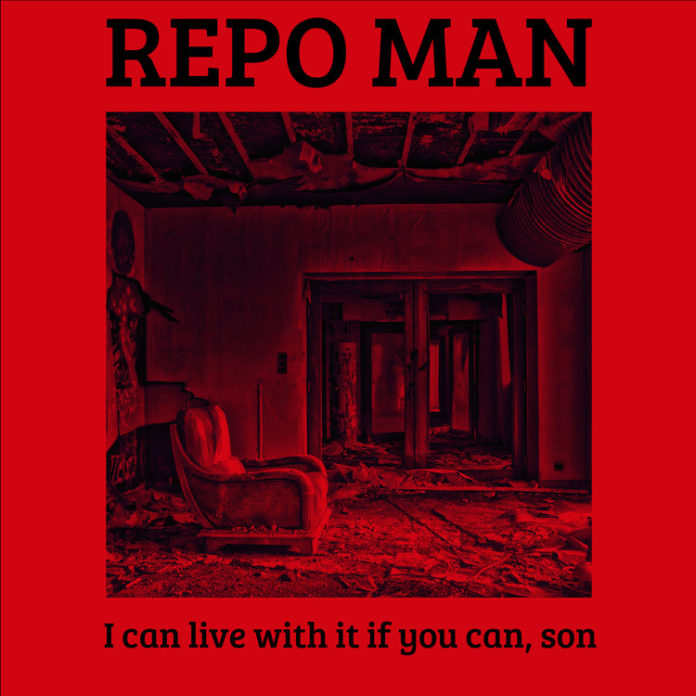 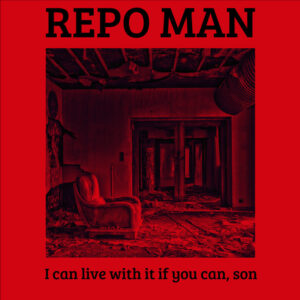 Repo Man: I Can Live With It If You Can, Son  (Stolen Body Records)

Four years have passed since Repo Man released ‘Minesweeping’. When I reviewed it here I said “there really isn’t another band around currently who sound quite like them (or if there is, I’ve yet to discover them.) – which in retrospect is ironic, because although IDLES existed and had started recording ‘Brutalism’, it wouldn’t be released until 2017.

Being from Bristol and making an uncompromising non-rock’n’roll noise with guitars and a shouty non-singer, it’s an obvious comparison, yet Repo Man are nothing like IDLES at all ….  yet, theoretically. should appeal to the same people, based on their music alone…. Repo Man don’t do choruses or chants and hooks though.  They are not as ‘huggy and lovable’ as Joe & Co and I imagine they are rolling their eyes at the comparison.

Repo Man are nothing like The Fall either – yet have that spoken-half-sung narrative, backed by a muscular, inventive and intuitive music.

So, on paper Repo Man are a viable, saleable concern in indie post-punk hipster circles. The trouble is, there seems to be a glut of post-IDLES, post-death of Mark E Smith bands, the most bankable of whom are pretty-boy-fronted Fontaines DC. Who everyone loves…. except me (seemingly).

Repo Man are ten times more original, interesting and genuinely intense than they are, and consequently will probably remain a ‘cult band’ sadly -but any one with a finely-tuned antennae will realise, this is a unique band who really are a bit special. Out of the ordinary, extraordinary rather than extra-ordinary.

Not that they are easily accessible… they are difficult, awkward buggers.. (Cue press release…)

Repo Man are Bristol based noiseniks comprising of Bojak (vocals/sax/violin), Ant Brown (bass), Liam McConaghy (guitar) and Jesse Webb (drums). ‘I Can Live With It If You Can, Son’ is their third album, following 2015’s Minesweeping and the first recording to feature new recruit Webb (also of GNOD/ The Final Age/ Anthroproph).

The album was recorded with Thomas J Bryan at Jute Box Studio and mixed with Matt Sampson at Bink Bonk Studio. It represents the band both at their rawest and most expansive. From the clanging fuzzed out sonic whirl of ‘Low Pursuit’ dissolving into the death waltz jig of ‘May I Interject’, to the lyrical puzzles and bubbling synth rotor of ‘Asexual and Spineless’ and the languid menace of the title track, I can live with it if you can, son shows Repo Man hurtling further into respective streams of noise and compositional acuity. This culminates in ‘Moaty’ – free-form ambient jazz smashed open by the band at their heaviest.

Building on their fierce live reputation – from supporting, among others, Lydia Lunch, Enablers, USA Nails, DUDS, Lice and GNOD – ‘I Can Live With It If You Can, Son’ displays an uncompromising clarity.

I should now dissect and analyse and try and pinpoint the strengths of Repo Man and this album, which is, truly a remarkable work and a ‘progression’ from the previous album, but… it’s not that I can’t be arsed… I’ve listened to the album literally 20 times… but it is just a manic, intense, wordy, disorientating, strange, beautiful, unsettling whole… which is not easy to disassemble or describe.  Bass-playing is astounding – but so is the guitarist and drummer.  Bojak just spews out streams of un-punctuated poetic verbiage like a hellfire preacher whose brain is about to burst.

This is bug-eyed, speaking-in-tongues anti-rock; psycho-analytical and gristly. James Chance & the Contortions meets Wire via the Birthday Party & The Pop Group etc etc, if you need those kinda pointers.

It is an album for people who are tired of everyday music and rock’n’roll, who want something new and difficult to get their teeth into. Repo Man make cerebral jazz punk for thinkers and drinkers on the edge of a nervous breakdown… in a good way.

Another viewpoint –  Great, well-considered review of the album here