Some rock legends out there are imprisoned by their past. They have great stories to tell… but they’ve relied on them a little too much to see them through the leaner days. One story, one past glory, one handful of carefully selected and re-rehearsed anecdotes from a time when their careers and lives were on full throttle.

As bass player for Detroit’s thundering MC5, Michael Davis, who died in hospital from liver failure on Friday, lived through a lot of late-1960s and early 1970s rock’n’roll shenanigans; the sort of thing we all love to hear or read about. And he has more right than most to claim punk pioneer status.

But Mike (as he preferred to be called in more recent years) was never the sort of person to rest on laurels. When the MC5 split for good in 1972 he remained acutely aware (even through the haze of a hard drugs history) that his life and spirit didn’t have to be dimmed by the demise of his band.

The criminally unreleased documentary film, ‘MC5 * A True Testimonial’ shows Mike as he was in the early 21st Century: an Arizona desert horseman with a pet dog named Rooster and one solitary MC5 concert poster on the wall of his small house. “It’s like a person, a being,” he would say of the long-gone Five. “But who is that guy? Who is that? He looks familiar. He’s someone I used to know – but who is he?”

He was a musician, a father, a husband – and a friend and inspiration to many fellow punks and rockers. He continued to record, play and produce music throughout his life, as a member of art-noisemakers Destroy All Monsters, Blood Orange and later Rich Hopkins and the Luminarios.

But he was also a painter, both before and after his term in the MC5. In the last few years of his life he resumed his study of fine art in California, picking up on the subject that he had dropped out of in 1964 to concentrate on becoming a revolutionary rocker. 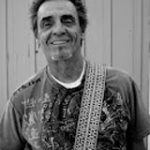 In 2006, following a serious motorcycle crash, he and wife Angela launched a non-profit organisation called ‘The Music Is Revolution Foundation’ to support music education in US public schools.

And, of course, as bass player for the Five throughout their career on Atlantic and Elektra, he joined original members Dennis Thompson (drums) and Wayne Kramer (guitar) for revival gigs in 2003. He becomes the third full-time member of the MC5 to pass away – singer Rob Tyner and guitarist Fred ‘Sonic’ Smith have already been taken from us.

Shortly before the True Testimonial film was completed I had the pleasure of escorting Mike on a tour of London – including, of course, its cosier pubs and nightclubs.

I will never forget his bemused but happy reaction to the greeting he received at Notting Hill Arts Centre, where Alan McGee literally bowed in deference to him; and Primal Scream’s Bobby Gillespie bent his ear about the MC5 for some hours. He danced with Pam Hogg, too.

Mike was an entertaining raconteur, a very warm and quietly intelligent man. His thirst for new adventure, new knowledge and new musical experiences was one never to be quenched. And his spirit and unhysterical viewpoint go a long way towards making ‘A True Testimonial’ a wholly righteous tribute to a fine band and a high old time.

Thunder in the night forever, Mike.