Home Music Remember King? they’ve reformed and our man is excited at the prospect 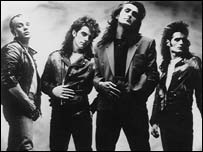 In the early months of 1985 an array of colour in the form of multi- coloured car spray trademark Dr Martens and leather jackets, a tartan suit with big hair-do cut through the winter gloom like one of those freaky one off summers days in the middle of February. The heat on the horizon came in the shape of a new exciting band called KING. MTV was still in its infancy and bands around this time knew that they not only had sound to the part, they would essentially have to look the part too, just to get a look in. King provided both ingredients and a nation of teenagers made King, rulers of the pop world in 1985.

Scroll on thirty years and like many of their eighties contemporaries, King are about to return to the live scene filling a space, a nostalgic spot in near middle age hearts who yearn for the sound of their youth. Fans once again get to fill their boots and King gets to put theirs back on! It’s a fair trade off!

King formed in 1982 as ‘The Raw Screens’ in Coventry from the remnants of a Ska band called the ‘Reluctant Stereotypes’ and once appeared on ‘The Old Grey Whistle Test’. By 1983 they had changed their name to ‘King’ and swapped their Two-Tone roots for Multi-Tone, rehearsing in Jim ‘Jackal’ Lantsbery’s family home attic with a makeshift microphone stand in the form of a Hoover vacuum with a microphone taped to it!

They toured relentlessly supporting Wah! Everything But The Girl and Jo Boxers and were soon snapped up by CBS/Sony records. They released three singles in 1984 that sadly failed to make a dent on the charts, however a warmly received support slot for Culture Club and an appearance on ‘The Tube’ prompted CBS/Sony to reissue ‘Love & Pride’. That TV appearance also prompted a new fan to venture into Birmingham city centre to scour record store bargain boxes of failed chart acts, I found a pristine ‘Soul On My Boots’ 7” and a tatty 12” of ‘Love & Pride’ in original sleeve dirt-cheap!

Mid January 1985 ‘Love & Pride’ made the UK top forty and three weeks later reached number two for a succession of three weeks. Robbed of the top spot by the quick grab a sick bag this one’s a stinker ‘I Know Him So Well’, Elaine Paige and Barbara Dickson. During 1985 they went on to have four more top forty hits, one of them a timeless classic that could have quite easily been recorded anytime from the sixties to the present entitled ‘The Taste Of Your Tears’. Their A-sides were also backed up with some pretty nifty tunes on the B-sides. They released two mighty fine top twenty albums ‘Steps In Time’ peaking at six whilst ‘Bittersweet’ reached sixteen. Two sell out tours of the UK, a successful tour of America, culminating with the band seeing in the New Year on the BBC with a gig at the Barrowlands Glasgow.

In 1986 I was lucky enough to witness their last British performance at the Birmingham N.E.C. Yiva Festival. King then split and Paul King went on to pursue a solo career in New York with Dan Hartman and never troubled the charts again, eventually turning up as a video disc jockey on MTV and then VH-1. Jim and Paul did try and resurrect the band, wrote new material then Paul left again.

In essence King were too late for the early eighties diverse pop party, not that it was ever bubble gum pop it always had a spikier edge to it. They were the penultimate bona fide classic pop act of the 1980’s (the last being A-ha). The latter parts of the decade were dominated by; big hair rock bands, dance, club and house music, manufactured, or the hit factory of Stock Aitken Waterman. This created an opening for leftfield pop and indie acts such as The Smiths and The Stone Roses to break through the dross of Bros and the likes, further creating a rather disjointed headache for the producers of Top Of The Pops, hence the much needed arrival of genre specific radio and satellite TV stations. In hindsight it was probably a good idea for King to split. If huge acts like Duran Duran and David Bowie couldn’t hit the higher regions of the late eighties UK chart anymore what chance could King ever have? They simply abdicated from their reign at the top of their game!

2015 and King have finally risen from the ashes, refreshed, reformed and rebranded, Paul declined the invitation to rejoin the group and gave the guys his full blessing and support. Now going under the moniker of ‘KING PHOENIX’ with three of the original four members.

After checking out a radio show they appeared on back in February Pete Chambers of ‘The Coventry Telegraph’ made the point that the reunion was well worth the wait and said, “Tony’s vocals did tremendous justice to these classic tracks but he was just being himself, rather than trying to sound like King. It worked brilliantly and the songs sounded fresh and new”.

I recently caught up with Jim Lantsbery the guitarist about the forthcoming gig and festivals 2015. I asked him why he’s reforming the band. He told me that he and Mike Roberts had been writing some new material together with Tony Dangerfield’s vocal in mind. The guys then got together for an unannounced live performance in aid of a local charity, the audience response to their show simply said it all, no going back, line-up secured.  He also said he’s looking forward to hitting the stage, playing the songs from the two King albums at a chain of festivals lined up for this year, with a rockier sounding edge, but then they always did live anyhow. The band have total faith in Tony up front with three female backing vocalists and assures me that the proof will be in the pudding. If the rise of King Phoenix goes to plan then they will be recording new material and hitting the live circuit again full time next year.

In the mean time you can check them out at the following gigs and festivals over the next couple of months..