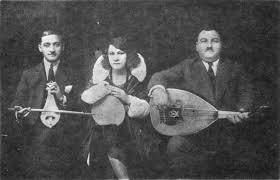 I fell in love with Rembetika- the so called Greek Blues in 1987 when the Membranes toured Greece. It’s haunting melodies and croaky vocals and rebellious lyrics struck a chord…

Sharp suits, opium dens, exotic instruments; singing songs of the gutter, drugs and women… the very word ‘Rembet’ means from the gutter- the Greek equivalent of jazz or the blues in the underbelly of the USA.

Running through the music is the same dark hearted outsider blood, the surly, almost macho, defiance of authority. A travelling hobo music for the dispossessed- that a government hated so much that the troubadours could be arrested on sight for carrying the bazouki, the six stringed instrument that was the key to the lilting gorgeous melodies.

Like the smoke of their beloved opium pipe, the Nargile, the Greek Rembetika music charms its subtle and deadly way into your soul. This is a rebel music, songs of the gutter, sung by crack throated, mad eyed troubadours; Rembetika is the beautiful, melodic, roughshod combination of east and west. A mid twentieth century rabble rousing music that celebrated the best things in life like sex, drugs and dandy clothes.

With its roots in an oral tradition, improvisation was always the key. The songs would kick off with a Taximi , giving the players a chance to show off and stretch out setting the mood of the song, a mood that would more often than not be a sad lament. As often as not there was no set song, lyrics would be ad libbed, about whatever was going down at the time.

First appearing after the collapse of the Ottoman empire in the early twentieth as a mix of Greek, Byzantine, Balkan and more obvious eastern styles, the form was cranked up by Greek immigrants who got displaced in 1923 from Turkey and Asia Minor at the end of the war between Turkey and Greece.

They had lived along the Smyran coast and Constantinople now Istanbul in the fading Ottoman Empire for years, until the Greek v. Turkey war of 1922/23 had resulted in a population exchange. The war was fought as the newly emergent Greece attempted to grab more land from the receding Ottoman empire. Dreaming of its old empire days it saw the most treasured prize of all, Constantinople, as a city it must regain. They lost the war as a newly confident Turkey under the leadership of Ataturk saw them off.

As part of the peace agreement, the two countries agreed to swop a million civilians, a painful process that robbed the two nations of the some of their unique multi-cultural heritage and also completely disrupted the lives of each intransigent population.

The formally fairly well off Greeks moved back to their original homeland. Outsiders in their own land and newly poor, they clustered in ghetto communities around the port town of Piraeus and in new sprawling suburbs of Athens.

They brought with them their traditional instruments and melodies and sang of their plight with rembetika.

This is the music of the dispossessed and the damned. They sang songs scoured with the pain of their transformation from relatively well off citizens of Turkey to their new found poverty on the streets of the Athens and Piraeus. That they also sang songs of sex, revolution and death and made up lyrics laughing at the police force, hardly endearing them to the authorities. It also cemented them with an underground status that the music was never to really shake off.

A meeting between the traditional, almost lament like, minor key sadness of middle eastern folk styles with modern urban lyrics, Rembetika was their hauling of an ancient form by the bootstraps and making it a soundtrack to the harsh urban reality of the early twentieth century. A time of population explosion, war, poverty and displacement, a time when some sort of traditional value and culture was the key in holding a society together.

To hear Rembetika you are wafted back decades, back to the late twenties when the term was first used in the hashish dens and cafes of Piraeus. with the players trying to remember the songs in their stoned and deranged minds.

The lyrics are thrown on top, mostly laments and husky throated howls, most of the time they are not even words just howling at the moon wailing from the Rembetes.

Your heart swells, as proud rebel songs waft out from the gutters, stirring melodies dashed with an eastern melodic sadness,  sung with throat’s hoarse from opium dens (tekedhes) and the pipe. This is the music of the outlaws and the manges (Greek wide boys) sung in smoke filled dens, whilst toking on the narghiles (opium pipes) over a raucous din, mainly by singers keen on the pipe themselves, meant that most of the musicians would eventually die of throat cancer. You can hear their gruff bleeding throats, howl out the cack stained melodies on the recordings, throats packed with a passion for hard living and deadly lust for life.

The names of these rebel, lust for lifestyle, outlaws linger on in Greek society. Some are dead, some turned to crime, some turned to politics, some checked out the country’s jails, whilst others died young, it’s a fascinating and mixed roll call of names, some of whom became household names in their native Greece.

Batis, Artemis and Stratos were the three great figures of the scene, along with Markos Vamvakaris, they played in the greatest of all Rembetika groups., the Piraeus quartet.

You can see their starched faces in the grubby photos on the back of the battered records, holding their bazoukies aloft looking arrogant and deadly, musical gunslingers with a fistful of great tunes.

Batis was the clown, who despite not being as musically adept as the others was a hit with his quick wit and wide boy edge which saw him raise money for the outfit by flogging second hand cars. Sartos, the singer, went onto later mainstream success singing with Tsitsanis and Papaionou Artemis who came from Smyrna was the only qualified musician 1943 and at only 29 he was dead worn out by a massive drug intake, he was found collapsed outside a tekedhes with his bazouki in his hand.

He certainly died with his boots on.

Meanwhile Vamvakaris went onto become known as the ‘grandfather of rembetika’  writing many classic tracks, when he played in the Piraeus quartet he often let Stratos sing in his sweet voice but when he eventually persuaded to sing on his own cuts-his leathery tuff gnarl growl became the vocal that the standard vocal style of the form and was much copied over the years.

After the war Vamvakris had a brief revival in his fortunes but the world had moved on and the form had new heroes as it moved on with the times, becoming less rough, less dangerous sounding. There was Vassilis Tsitisanis who had written subtle, thinly veiled laments for his homeland over run by the right wing military in the sixties which became rallying tunes for the oppressed population. After the war he became a star in his own right or teamed up with Sotiria Bellou.

The Billie Halliday of the scene,  Bellou, battled against the authorities and the inherent macho of the scene, there are whispered tails of a wild life that occasionally saw her in jail, a wild and carefree life that should have snuffed her out years ago, today she sing in garish night-clubs.

With a voice less harsh  than Bellou, another female vocalist Ninou also worked with Tsitanis.

The fifties saw the rembetika break out from its underground bolthole and go mainstream making big bucks the players were often amplified losing the very subtlety that were the key to the music. revivals became the key as Rembetika became a rallying call for the dispossessed and the revolutionary, never losing the rebel status that had once seen the police raiding the nikhales . The fascist colonels in the sixties saw the music banned and it became a fitting soundtrack for the underground, intellectual resistance to the nazi buffoons, after the colonels were run out of town  rembetika flourished in the bars and clubs and it remains a late night workout now boosted by its defiant status- clebrated as the music the hated colonols had tried to ban-during the fascist colonels inglorious rule in the late sixties and the early seventies the form came back into fashion. In the bars and cafes of the Greek cities and towns the newly banned form of music became a rallying call; the anti authoritarian stance, the hatred of the police and the pro hash stance of the rebel songs stirred the hearts of the Greeks against the fascist buffoons. When the cynical old men were joyously over thrown, rembetika enjoyed a massive revival.

To watch the dancing to the music (Zembekiko)is in itself a education, very male oriented (infact the whole scene is of course pretty macho) the dancers would stand as if in a trance slowly moving in a circle, an introverted, compelling strangeness, that looks like the confused pirouette of a drunk complete with toothpicks in surly gobs. Everyone in the bar starts to sing along to the well worn words as if in celebration of the very soul of Greece itself, it may sound like a drunken rabble but it is the joyful celebration of the very soul of a modern nation.

Beautiful tunes and haunting bazouki lines that lie at the often very uncomfortable point where the east meets the west.