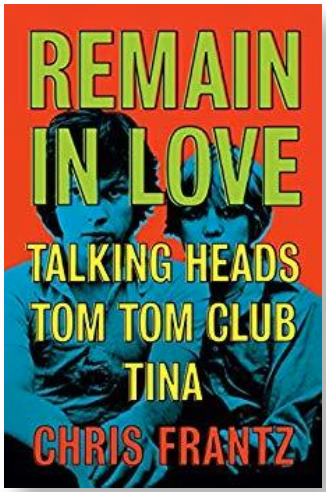 Chris Frantz’s memoir Remain in Love: Talking Heads, Tom Tom Club, Tina hits bookstore shelves this week. The book, like a number of music autobiographies, is constructed of dozens of mini chapters (56 in total) that largely chronicle Frantz’s personal recollections of growing up and getting a musical education, attending Rhode Island School of Design in Providence, meeting Tina Weymouth, and forming Talking Heads and Tom Tom Club. Throughout the memoir, the rift between Frantz and David Byrne, the lead singer of Talking Heads, is salient. The book is filled with incredible anecdotes from the New York punk and post-punk scene, and of course CBGB. Anyone who loves Talking Heads or Tom Tom Club will be enamored with Frantz’s detailed memories of New York City in the 1970s and 1980s, and touring in the U.K. and Europe with bands like the Ramones. While it’s not the best written music memoir I’ve ever encountered, the stories can’t be beat.

Did Frantz try to get Debbie Harry to join his new band as a lead singer before the days of Blondie? Indeed, he did. Did he and Tina walk around Stonehenge with Joey Ramone, Dee Dee Ramone, and Tommy Ramone? Yes, yes they did. Did Lou Reed, while eating from a pint of Häagen-Dazs ice cream with a heroin spoon, tell David Byrne to avoid short-sleeved shirts onstage because of his hairy arms? Indeed, reader, he did. Those are just a few teasers.

Although the text largely moves in chronological order, it’s punctuated throughout by “Psycho Killer,” the first big hit for Talking Heads. The book opens in December 1980, on the stage at the Palasport in Rome. The band gets the gig going with a “boom, boom, boom, boom, boom, boom, boom-boom-boom.” It’s Weymouth’s bass, her “familiar introduction to ‘Psycho Killer’ [that] set off a roar from the audience so loud that,” Frantz writes, “I had to ask the monitor man to turn up my monitor so I could hear the band.”

The song becomes a trope throughout the narrative, punctuating histories of Talking Heads and New York City more broadly. Frantz describes how Weymouth, in 1973, wrote the French lyrics of the song while thinking about Alfred Hitchcock, “whose Norman Bates character took offense to women that he saw as being loose.” In terms of the rest of the lyrics and the incomparable sound of “Psycho Killer,” Frantz explains how he, Weymouth, and Byrne brainstormed until the song came together. When Talking Heads recorded its first album in New York City in 1977, “the first song David sang was ‘Psycho Killer.’” And during the riotous “Summer of Sam” in which David Berkowitz went on a killing spree in the city, listeners started asking if “Psycho Killer” had been written about the infamous serial killer. As Frantz clarifies, “we said, ‘No, the song had been written years ago when we were art students.’” Naturally, when the band reunited ever-so-briefly to perform at their induction into the Rock and Roll Hall of Fame in 2002, they decided to play “Psycho Killer.”

The memoir underscores the New York centricity of the band, and the connections between New York and U.K. musicians in the late 1970s and early 1980s. Although Los Angeles had at that point become a geographic beacon for rock’n’roll, Frantz doesn’t make it to California until Chapter 36—well beyond half-way into the book. His descriptions of some of New York’s best-loved venues and record shops feel quaint and naïve in a sweet way. The same goes for descriptions of various U.K. spots. He describes CBGB as if his readers might not know it: “Jamie [a friend of Frantz’s from RISD] knew that I was planning to start a new band in New York and he told me there was something going on across the Bowery at a place called CBGB, which stood for Country Bluegrass and Blues, the sort of music preferred by its owner, Hilly Kristal.” Similarly, he describes Rough Trade’s London shop as if his reader might not have shopped there: “Down at Portobello Road there was a huge flea market and all kinds of punk and reggae delights to be had, not the least of which was tiny little Rough Trade Records. They were selling a lot of punk records out of there and our seven-inch single, ‘Love → Building on Fire,’ was in the front window.”

I read that Frantz didn’t want his book to be “by a whiny drummer beating up on the lead singer,” but I have to admit I was taken aback by the way in which his bitterness toward Byrne seems like a driving force at moments in the narrative. Even the last pages of the book seem like a final dig at Byrne in a way that somehow doesn’t feel quite right—especially when Frantz and Weymouth have spent the last decades recording and producing so much incredible music on their own. And do I wish some of the descriptions of Weymouth didn’t feel so objectifying, or that Frantz didn’t seem so surprised to discover that Viv Albertine of the Slits “turned out to be a very good writer”? Yes. Despite recalling a conversation with Johnny Thunders at CBGB in which he acknowledged Talking Heads was a “feminist band,” Frantz’s descriptions don’t always read as those written by a feminist.

On the whole, Frantz’s recollections are a wellspring of music memories and anecdotes from the punk and post-punk days. If you’ve ever bought a Talking Heads or Tom Tom Club record, or if you have any interest in what it was like to tour Europe with the Ramones or produce a Happy Mondays record, you should absolutely read this book.

You can purchase the book here.