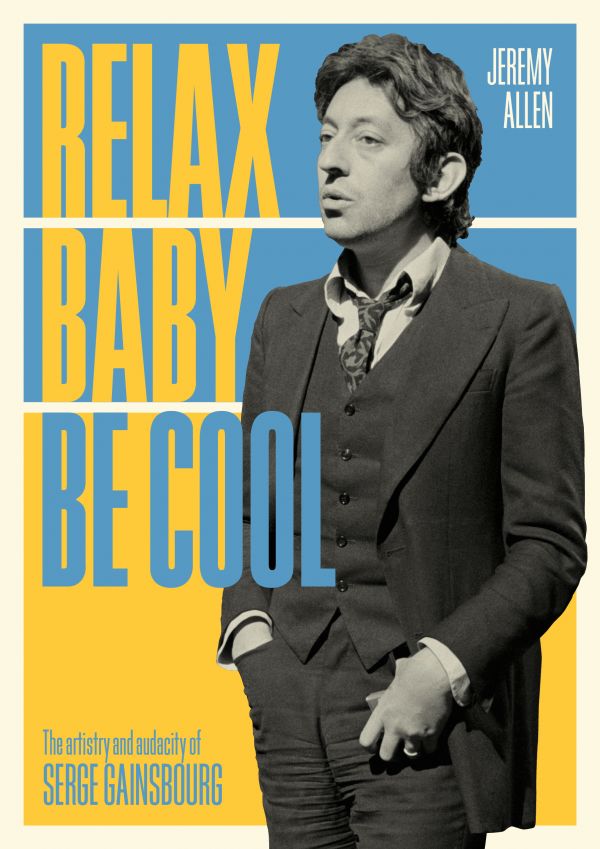 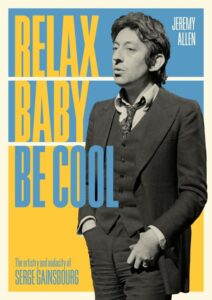 Jeremy Allen has written the most comprehensive narrative of Serge Gainsbourg imaginable. As engaging as it is detailed, it provides a fascinating insight into the life of this cultural icon. Gordon Rutherford reviews for Louder Than War.

“Self-destruction is a requisite for any poete maudit.” (Relax Baby Be Cool, Jeremy Allen).

March 1991. At home, on the Left Bank in Paris, a colossus of French culture suffered a fatal heart attack, sending an entire nation into mourning. Coincidentally, Louder Than War chief, John Robb, arrived in Paris on the day Serge Gainsbourg died. He soon discovered that Europe’s great city of light was enfolded by a shroud of sorrow. There were crowds gathered outside the singer’s apartment at Rue de Verneuil who would spontaneously burst into a mass acapella version of one of his greatest hits, La Javanaise. President Francois Mitterand marked the moment by stating “he was our Baudelaire, our Apollinaire”. The day Serge Gainsbourg died, France lost an icon. Here, in the UK, we shrugged our shoulders.

The vast majority of Brits never really cared much for Serge Gainsbourg. We never really ‘got him’. Nonetheless, since that day in 1991 he has gradually acquired cult status, a special kind of cool hipness, in these parts. Much of that is to do with his (now) much-vaunted 1971 album, Histoire de Melody Nelson. To illustrate the evolution of this album in the public consciousness, just last month in Louder Than War we ran a feature celebrating the fiftieth anniversary of 1971. “It was the best year ever for album releases”, we boldly proclaimed. My God, how the chattering classes eviscerated our feature, in part due to our omission of Histoire de Melody Nelson. Honestly, there would have been less controversy had we included The Glitter Band. But, let’s be honest – it’s not really in the spirit of the game to pick an album that you first heard five years ago, is it? Sure, all the hipsters will claim to have walked to school every day with a copy under their arm, but the reality is that the album was, until fairly recently, almost entirely ignored by the UK. At least Jeremy Allen, the author of Relax Baby Be Cool, has the good grace to confess that he first heard it, and subsequently became enchanted with Gainsbourg, in 2005. That chance encounter occurred thanks to a boxset sent to him by a long-forgotten donor. We should all be grateful for that moment of serendipity, as it ultimately inspired Allen to write Relax Baby Be Cool.

At heart, we are all voyeurs and the minute we crack the spine on Allen’s book, we are all eagerly awaiting the arrival of the uber-controversial version of Gainsbourg (or, as we discover, his alter-ego Gainsbarre). You know, the one who released a reggae version of La Marseillaise (apparently, that’s a no-no) and torched a five hundred franc note live on TV (again, apparently not cool). You could argue that both of those incidents are relatively small beer. It would be more difficult to overlook the duet with his daughter on a song about incest (Lemon Incest) or the time he sat alongside Whitney Houston on a live chat show and drunkenly proclaimed, “I want to fuck her”.

Masterfully, Allen teases us with this untameable doppelganger. As the book unfolds, he allows us a peek behind the curtain, but never gives it all away until the denouement. In that sense, for much of Relax Baby Be Cool, Gainsbarre is like Frankenstein’s monster. He may be lurking in the shadows, but you know that sooner or later he’s going to come out and wreak havoc. As an arch storyteller, Allen understands precisely what the audience are waiting for. We all want the juice and the scandal, but he skilfully resists the temptation to dole out the titbits. After all, he has a tale to tell and Serge Gainsbourg’s life and work amounts to much, much more than those last couple of years of self-destruction. Equally commendably, when Allen does get there, he avoids the temptation to be overly dramatic. He reads the room intelligently and delivers those final chapters with just the right tone. Despite his obvious admiration for Gainsbourg, he is not defensive nor does he attempt to excuse the artist’s misdemeanours. He lays them out coldly on the slab, allowing us to assess the damage and draw our own conclusions.

It’s actually something of an injustice that (certainly in the UK) Gainsbourg became more famous (or notorious) just for being controversial. Even putting Gainsbarre to one side, you only need to mention his name and people automatically think of the twopenny-erotica of Je T’aime. Yet, he was clearly an incredibly gifted musician and songwriter, even if there was something of the magpie about him. And what an intriguing life, a chronicle desperately crying out to be told. Fortunately, Allen is a captivating storyteller who hits all the right notes in the telling of it. He shows us Gainsbourg’s life unfolding in an erudite and entertaining, yet seemingly effortless, way. Unfortunately, so many biographies turn out to be pretty one-dimensional, as they traipse from event to event, relaying granular details of people, places and facts but told with no colour or personality. As an experience, it can often be like reading the back of a ketchup bottle. In the same way that Paul Gorman did with his superb 2020 biography of Malcolm McLaren, Allen paints vivid pictures in our minds. There’s no doubt that Gainsbourg was a fascinating subject to write about, but Allen ensures that he is also a fascinating subject to read about. He does the raw material justice by telling the compelling story of a great man’s life in a proper storyteller’s way. From a reader’s perspective, the experience is a sheer delight.

As he takes us by the hand and walks us through each of Gainsbourg’s albums, Allen eschews the lazy option of simply detailing the tracklist, the cast and where it was recorded. No, he illustrates everything around the event, all of the moments happening in parallel across Gainsbourg’s life at that point in time. The greatest example of this lies in the chapter entitled Nazi Rock (covering the 1975 album, Rock Around The Bunker), where the most interesting passages are absolutely nothing to do with the album. Instead, it’s the contradiction between the album’s theme (the title is a clue) and Gainsbourg’s religion (he is Jewish). This is a man whose parents were forced to flee pogroms and persecution in Ukraine, only to find persecution pursuing them again in France when the second world war began. Gainsbourg was eleven when World War Two began, old enough to recall being forced to wear the yellow star. The chapter unfolds by revealing his centrist political views and how they were understandably influenced by an insight into where extremism – both left and right – leads. It’s precisely that level of storytelling, insight and human perception that elevates Relax Baby Be Cool over the vast majority of music biographies.

However, whilst Allen is undoubtedly a master storyteller, he doesn’t skimp on the fine details. In Relax Baby Be Cool, Jeremy Allen delves deeper into the life and times of Serge Gainsbourg than anyone before. He achieves that through the unrivalled gravity and quality of his research. No stone was left unturned in the writing of this incredible tome. Allen interviewed Gainsbourg’s partner of many years, Jane Birkin, and her brother Andrew. He spoke with Gainsbourg’s daughter, Charlotte and his sister Jacqueline. Relax Baby Be Cool is not merely a collage of old press cuttings. On the contrary, Allen got as close to Gainsbourg as he possibly could, by having detailed conversations with the people who knew him best.

Towards the end of the book, Allen poses the million-dollar question: what would happen to Serge Gainsbourg today? Artists flirt with social media to continually escalate their profile and nobody was more obsessed with publicity, of any kind, than Gainsbourg. He loved to shock, striving to achieve peak audimat. Why else would he burn a five hundred franc note live on television? But how would cancel culture impact him? Of course, we can never know for sure, but I would hazard a guess that he would be on his seventh cancellation by now. At least. I would also guess that he wouldn’t care. Having gleaned something of an insight into the man via Allen’s words, I certainly don’t think he would be offering up snivelling apologies in a pathetic and vain attempt to win back ‘followers’.

In summary, Relax Baby Be Cool is quite marvellous. The writing is outstanding and the storytelling as good as any biography I have read in recent times. Hell, it even made me revisit – and reappraise – Histoire de Melody Nelson. Finally, I have to say that we should never judge a book by its cover. But great design never hampered the reception of any book and the cover art of Relax Baby Be Cool is simply great design. Those colours, that typeface and the oh-so-cool shot of Gainsbourg absolutely blew me away. Never has the term ‘art’ been so appropriately applied.

The world is awash with music biographies and time (despite successive lockdowns) is finite. If you can only make room for one music biography in your life this year, make it this one. You won’t regret it.