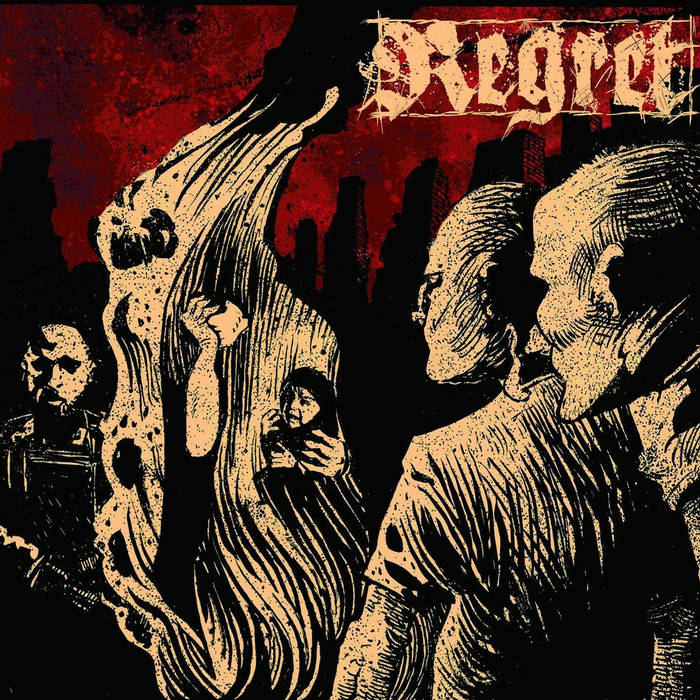 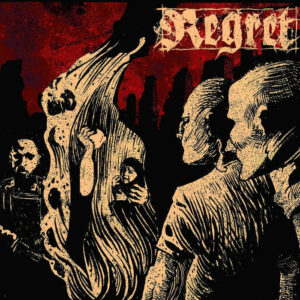 Bristol crusty punks Regret unleash their latest 4 track offering which Nathan Brown tells us is as ferocious and full of mayhem as their blistering live performances.

Regret have built themselves a steady reputation with a debut EP and gigs across the UK.  The imposing demeanour of singer Dean launching into the crowd while the rest of the band are heads down delivering a tight, heavy and upbeat soundscape has won them plenty of friends on the DIY punk scene . They are definitely one to watch both in terms of  “see them if they play near you” and also “this band are going to be really significant”. The question is whether they could capture the mayhem in the studio? Telling them I was “expecting greatness” when I offered a review, the typically self effacing response I got was “lower your expectations”. I’m glad to report they have lost none of that ferocity in the studio.

Rumbling, pounding and grinding, the galloping rhythm section and down-tuned guitar thrash away while hoarse vocals shout, delivering streams of relentless rant with only an occasional pause for breath. The addition of some cheeky guitar hooks and solos – with just a hint of metal – are the icing on the cake.   The overall sound is very similar to the style of Behind Enemy Lines and they share the tightness and musicality of fellow Bristolians Grand Collapse.  Imagine, if you will, the bastard offspring of Propagandhi and Wolf Brigade.

The anger in those vocals is not mere punk posture – the delivery matches the venom of the words themselves. The EP title track is a defence of refugees who are “exploited by these vile hate bags, and fuckin thugs waving Nazi flags”. As the song concludes they ask “What would you do in their shoes? Where’s the compassion and love?”  Two very good questions.  Given that hate mongering comments have started appearing in social media on the fringes of the punk scene, and the creep to the right of some middle/old aged former punks, this song has as much relevance within the scene as it does in the global context.  You just can’t assume that what masquerades as punk is against the right wing any more.  The song’s theme is also represented in striking artwork from Skinny Graphix that deserves a mention.

Regret’s songs are a mix of personal and political. Prepare for a Fall set its sights on posers and shit stirrers.  There’s No Happy Endings captures the depressing realisation that life ain’t the box of chocolates we were told it would be, as the optimism of youth gives way to cynicism.  Deceit is an attack on the parasites at the top of the current economic and political system and as that song draws to an end they repeat the line “Don’t trust what they say cuz they’re lying to you”, building in intensity and hammering home the message.  That phrase serves as a theme for the whole record.  Hatred against refugees has its roots in lies propagated about them, laying blame at their door for the ills visited on us by a capitalist system extracting maximum wealth from our communities to serve the interests of shareholders.

As is de rigueur in the DIY punk scene this is a multi label release through Pumpkin Records, Urinal Vinyl, Svoboda Records and Never Fall Into Silence Records with the band having a stake too.

Pre-orders before the 31 October release date get a bundle of the 7″ single, A3 Poster, stickers & badges and are also in with a chance to win a Test Pressing.  Get yours from their Bandcamp site.