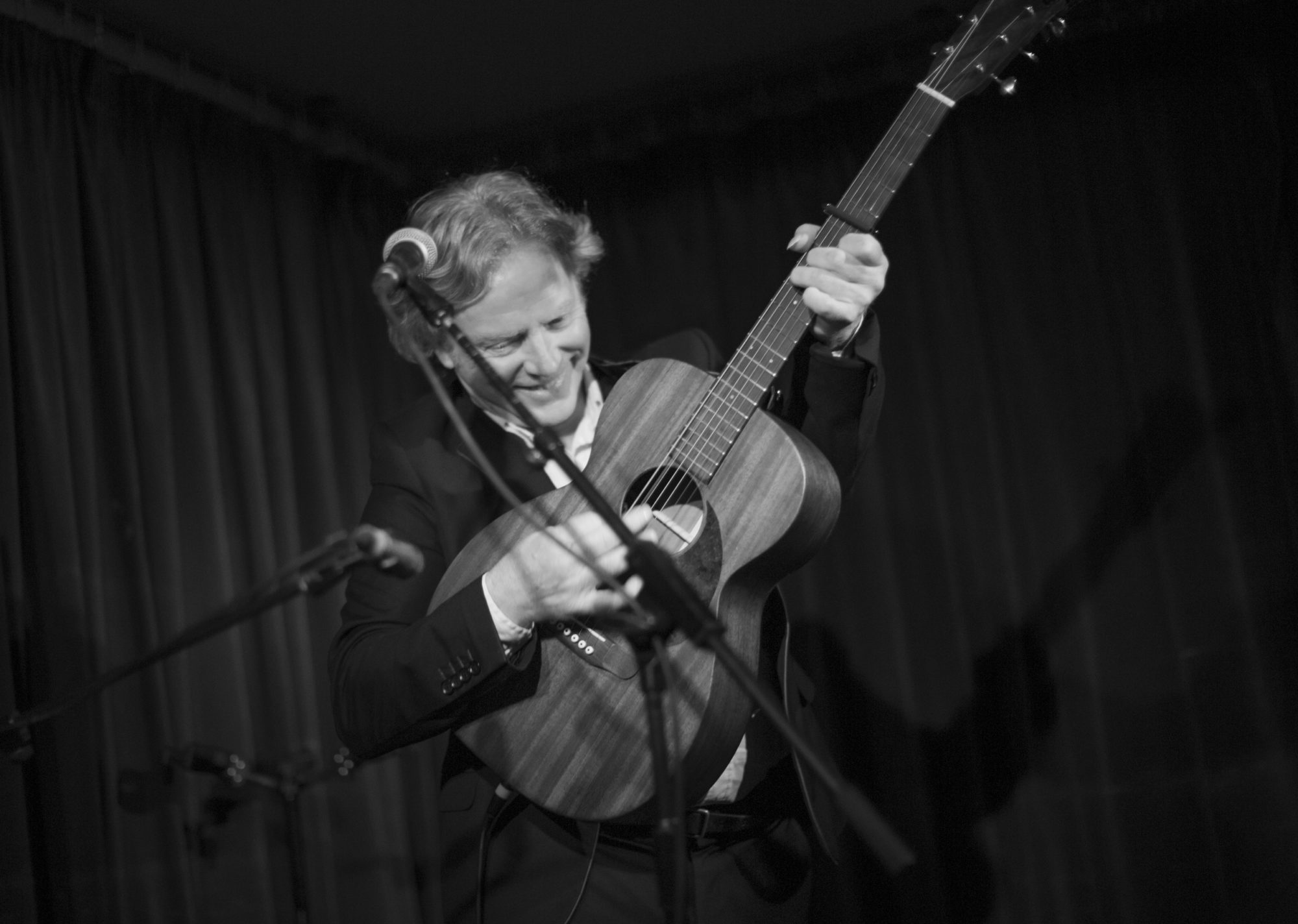 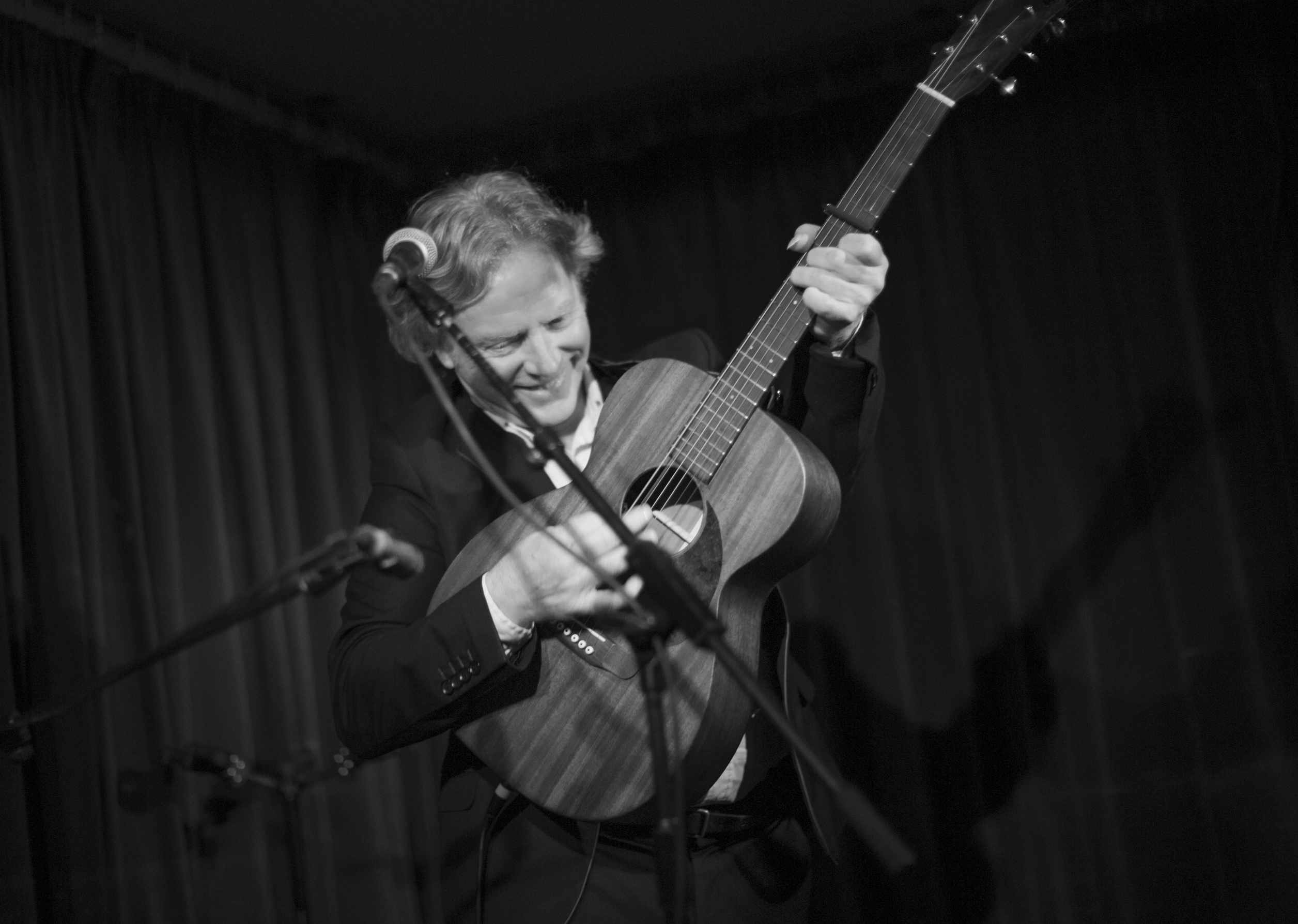 Reg Meuross has been a mainstay of the UK acoustic scene for the past thirty years whether touring in the Panic Brothers, The Flamingos or solo, he has developed a solid body of songs that coupled with his ability as a storyteller offer a compelling evening where anecdotes mix with his gentle guitar picking. We reviewed Reg’s recently released December on the site last week.  A fine album of well crafted folk tunes ideally suited for a solo gig like this one at The Green Note as it featured only Reg with his 1944 Martin guitar. The show was divided into two halves in a format not too dissimilar to the Tony Hazzard one that took place in the same venue last Month.

The first half featured some songs from his back catalogue starting with “England Green and England Grey”, a song that was banned by the BBC when it was first released but that Reg apparently managed to squeeze in in a radio session he did on one of the corporation’s many branches. One of Reg’s best songs it is an hymn to what’s good about England and of the dangers that the country faces. Reg is a socially conscious musician but far from advocating his views in a harsh way and ram it down people’s throat he lets his songs show his opinions. The second song “Tony Benn’s Tribute to Emily Davison” was introduced by a great story about the labour politician putting up a plaque in a broom cupboard at Westminster where the Suffragette had hidden during the night of 1911 Census.

Next was Reg’s love and hate letter to London “My Name Is London Town” that was first released on his 2013 album “Leaves and Feathers” and by another track from the same LP entitled “My Jerusalem”. A yet to be released song entitled “Faraway People”, was in Reg’s own words “a song written after finding the Hephaestus site which was a long list of all the people up until the end of 2014 who had died directly as a result of cuts to their benefits by Atos or because of the bedroom tax. The names are real and just a tiny few of the many who suffered.” The last song “For Sophie (This Beautiful Day), written about 21 year old Sophie Scholl who was executed in 1943 for distributing anti-war leaflets in the university of Munich.

Reg is participating in the Concert To Calais series of shows that are taking place at the end of this month and just before leaving the stage he introduced Ahmad, a Syrian refugee who told us a harrowing tale mixing elements from his flight from a country that he loves and cherishes and also from his work with the UN helping refugees near the border.

Reg then thanked Ahmad for his brave intervention and invited us all to attend the Concert To Calais show at The Dublin Castle on the 20th of March. After explaining a little about  December and its recording, he then played the album in its entirety. A masterclass of affecting love songs each greeted by thunderous applause and appreciative murmurs from the audience on the quality of the material. Jokingly described by Reg as a “set of miserable love songs”, they are affecting vignettes about relationships. Particular highlights were great versions of “Smarter Than Me” and “The Hands Of A Woman”.  After a singalong version of “It’s Me Or Elvis” from his 2006’s release Still, Reg bade everybody farewell and took time to chat and sign cd’s for everyone who wished to.

All photos by Sue Foll. More work by Sue can be found at her official website: www.suefoll.co.uk. She’s also on Twitter.