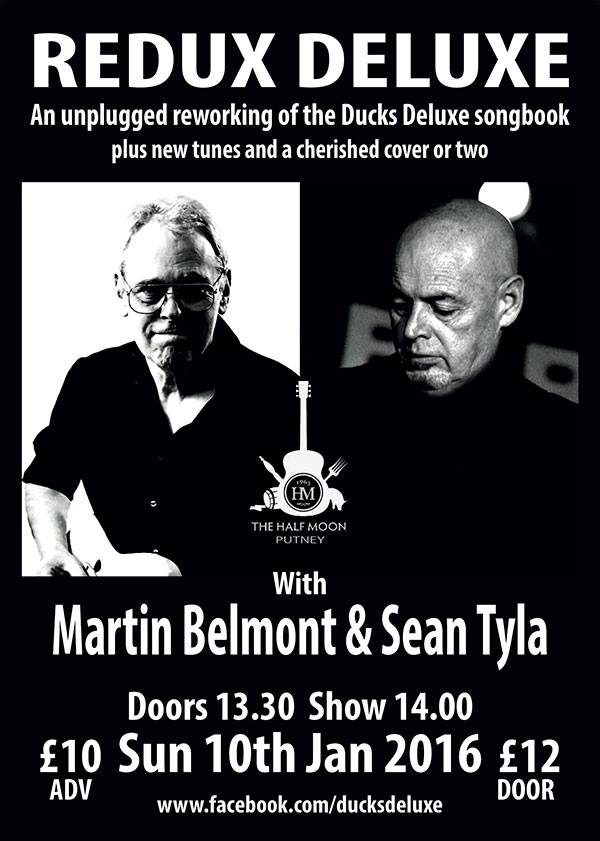 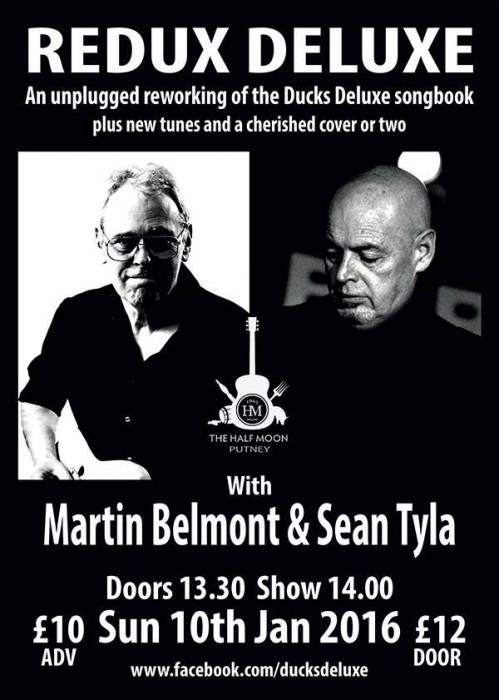 Seminal pub-rockers play their first gig as a Redux Deluxe at the legendary Half Moon in Putney. Louder Than War’s Craig Chaligne reviews.

After closing two chapters of his musical career with final gigs by Ducks Deluxe and The Tyla Gang in December 2014 and October 2015, Sean Tyla has now started a new phase at the tender age of 68. Triggered by a permanent loss of hearing in his left ear, he started an electro acoustic project called Heartlander that will see the light of day in 2016. After a few electro acoustic gigs in Sweden during the fall of 2015, he announced a one off duo performance with former Ducks Deluxe guitarist Martin Belmont. Belmont a veteran of the pub-rock scene has played with almost every major artist from that period (Elvis Costello, Nick Lowe, Graham Parker, Paul Carrack). Billed as “An unplugged reworking of the Ducks Deluxe songbook plus new tunes and a cherished cover or two”, the afternoon performance started with a Ducks classic “Fireball” followed by “West Texas Trucking Board”, both of them coming from the Ducks’s first album. Third on the bill was the first of many Bob Dylan covers: “Queen The Eskimo (Mighty Quinn)” sung by Belmont (“a rare treat” Tyla dead-panned before the song started). An attempt at replicating the set of keys percussion used on the original recording of “Daddy Put The Bomp” failed but a heartfelt tribute to Tyla’s Irish grandfather who was part of the Irish Republican Brotherhood (and who lost his life for it) was a highlight. The rarely played “Falling For That Women” proved a success despite a rather rambling introduction from Belmont that finished with Tyla saying: “There’s nothing particularly good to say about this song”. After lifting his glass of water to Lemmy (who invited Tyla to join a fledging Motorhead back in the seventies), the duo finished the first set with a cover of Tom Wait’s “Hold On”.

In an echo of The Tyla Gang’s farewell gig, the second half started with a cover of Little Feat’s “Willin'” (a song that Tyla has mastered perfectly). A take on the traditional “Long John Dean” preceded “Pink Cafe” from Tyla’s “Redneck to Babylon” solo LP and a rendition of the Ducks’s “Heart On my Sleeve” sung by Belmont. In an attempt to diversify the provenance of their covers Belmont announced that the next numbers were written by Robert Zimmerman and they then played two Dylan classics in a row (“Simple Twist of Fate” and “It Takes a Lot To Laugh, It Takes a Train To Cry”). Closing the set were a slowed version of “Coast To Coast” and an impromptu rendition of “Nervous Breakdown”.