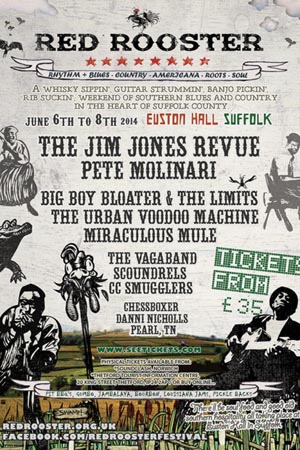 Red Rooster Festival describes itself as “a whisky sippin’, guitar strummin’, banjo pickin’, rib suckin’, weekend of Southern blues and country in the heart of Suffolk County.” The 2014 edition was just last weekend and Louder Than War’s Luigia Minichiello has filed the following report ….

The raucous racket of the Deep South in the grounds of an English country garden?

Euston Hall is stunning. Lawns have been meticulously mown, leaving wild flowers and other flora and a sweeping view of the grand house and pond.  Grassy meadow walkways have been given temporary whiskey sippin’ names like Bourbon Street , one of the many comforting and thoughtful touches that abound across this green and pleasant site.

Piles of logs are ready stacked for late night fires, and chairs fashioned from old wagon wheels (plus, of course, multiple bales of hay) create an authentically countrified and relaxed atmosphere.  It’s an intimate gathering – a sold out capacity of just 1,000. Great efforts are made to entertain the troops with lawn games like space hopper races, competitive rounder matches and other timely rural pursuits for those moments when we are not completely immersed in the music.

The barn doors swing open at mid-afternoon on day one, and opening night culminates with highly entertaining badass buskers CC Smugglers, who bring much charm and energy to their stage.  They leave us more than warmed up and ready to stomp and bop until 3am to the fantastic DJ playing everything from Little Richard to Johnny Cash and Elvis. 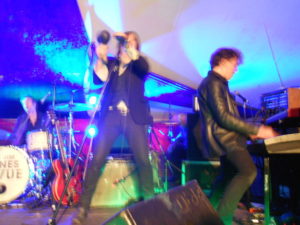 A huge rain storm on the Saturday morning does nothing to dampen spirits, and from early in the day sweet folky tunes drift across the site from a wooden shack in the grassy knoll – dubbed the Swamp Shack Stage.  An array of acoustic groups and solo artists perform here, including a talented bunch comprising a plucky female banjo player and moustachioed man on tea-chest. No one seems to know who they are, but everyone loves the ambiance.

Late addition to the main stage, The Dirty Strangers, play fierce guitar driven bluesy punk anthems – think bastard child of the Rolling Stones and the Heartbreakers .  Their good time rock’n’roll pedigree stems from the mid 80s, and both their first and last album boast guest appearances from Ronnie Wood and Keith Richards.  They hail from Shepherds Bush and they nail their colours to W12 by name checking local landmarks in humorous ditty Shepherd Bush City Limits. They romp through Gold Cortina and Keep A Knocking, and the infectious piano riffs continue as they break into She’s A Real Botticelli, dedicated to the Red Rooster governor.  Phew! 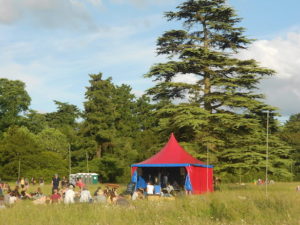 Next up are Anglo Irish trio Miraculous Mule, who have turned everything they have up to 11. They are loud and fast, and they give a kick like their namesake to their dark and sinister spin on the blues, particularly on tracks like Evil On My Mind.

Deep Fried (title track of their debut album) is a raucous, hair-stand-on-end guitar affair.  Pounding drums mark final song Satisfied, a tune which goes some way to documenting their rock’n’roll lifestyle. This lot have certainly sharpened their skills via more than a few after hours lockins.

The pace switches for charismatic Big Boy Bloater And The Limits. Bloater has been a stalwart of the retro R&B scene for many years, having played with a veritable roll call of legendary 50s blues acts, earning heaps of accolades from musicians and critics alike.

When he strikes the first few chords to his 2008 Mark Lamarr produced single, Double Whammy!, the crowd is on its collective feet and dancing.  Bloater takes inspiration for his songs from a very peculiar palette – certainly, there can’t be too many songs about food poisoning and restraining orders? And it’s this down to earth approach that attracts such warmth from his fans as he leads into Every Path Has Its Puddle, a single that features Ms Imelda Mae alongside his signature twang . His powerful style is evident throughout this stonking set, and he is indeed worthy of high commendation.

Bourbon soaked gypsy blues maestros Urban Voodoo Machine are a crazy collective of London based musicians led by the darkly compelling, Norwegian born Paul-Ronney Angel.  They tumble onto the stage to thrill the audience with their cartoon Carry On style.  And they are quite a spectacle, all suited and booted in red and black. Their mashed up tangos and stomping murder ballads resemble a New Orleans second line band, and it’s easy to understand how they came to be handpicked to open up for The Pogues.

Paul-Ronney persuades everyone to sing along to happy gothic tune Bucket Of Blood, and the horn section gets a chance to shine on Crazy Maria. It’s all good hearted japery . The fun of the fair comes to a close as Big Boy Bloater pops up to help out on Help Me Jesus, (a recent single with Wilko Johnson) , accompanied by a fabulous sequin clad, flame haired fire eater. It concludes a rip roaring show.

The tent is totally full for The Jim Jones Revue, whose fans include Nick Cave and Liam Gallagher, and who have just announced a final, farewell tour for later this year.

The audience is in the palm of Mr Jones’ hand from the moment he swaggers onstage. Both men and women reach out to try to grab this frontman something I have rarely witnessed.  They ALL want a slice of those tight black cotton jeans.

It’s rehearsed and slick, needle sharp rock and roll. Seven Times Around The Sun showcases the band’s ability to pare their sound down to just vocals, drums and piano. And the atmosphere is electric with the bump and grind sassy garage style.  They hit us with both barrels of Rock And Roll Psychosis, then the place is flooded with verve as they press on with the somewhat ironically titled Collision Boogie then High Horse.

The audience seems a little overcome by the bombardment – or is it the heat? Off come the shirts, and onto each others’ shoulders they go.

The band finish with Princess And The Frog, complete with lyric “I am a man, I am a man…!” Yeah, I got that. Now hand me the pregnancy test kit because this is an onslaught of 100 per cent testosterone.

The Jim Jones Revue are in no way acting like a defeated band. I hope they have plans in their back pockets as it would be a damn shame for them to walk away from this adoring audience and all that they have created.

So as the sun goes down on Red Rooster, how did Suffolk fare under invasion from all this guitar strummin’, banjo pickin’ and southern rib suckin’ stuff?

Brilliantly. Red Rooster, you were a hoot – and you proved that the UK rhythm and blues scene is in damn good shape right now. You simply must become a regular fixture on the British festival calendar.

Bands and performers featured in this review can be found on the following links – CC Smugglers, The Dirty Strangers, Miraculous Mule, Big Boy Bloater And The Limits, Urban Voodoo Machine, The Jim Jones Revue