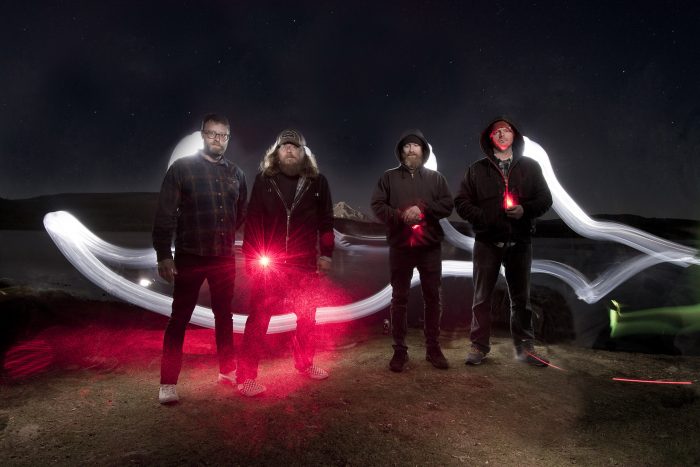 Portland’s Red Fang have been steadily building in statue since their eponymous debut album and break out single, ‘Prehistoric Dog’ in 2009. The big slabs of stoner riffage and irreverent humour (check out their videos below) that is their foundation make it easy to like them even though they get criticised for ‘playing it safe’, especially on their third album, ‘Whales And Leeches released in 2013. A new album is on the horizon ( Only Ghosts is released on the 14th October 2016) and from the size of the crowd who have come out for tonight’s show, it’s safe to say it should sell well.

This tour is a double headliner deal with label mates Torche along for the ride, but a great amount of kudos must go to the opening act, God Damn. Hailing from Wolverhampton, God Damn have been bringing a hell of a lot of heaviness since their inception in 2010. Their debut album, ‘Vultures’ displayed a mastery of the ‘hard as hell’ approach. Frothing with grungy melody, it makes sense that Dave Grohl would ask them to support The Foo Fighters when they played in Manchester last year.

God Damn owned the stage tonight with a feverous desire to win over Red Fang and Torche fans. Confidently plowing through their set, they hit harder, screamed louder and playing more intensely than I have ever heard. Originally a three piece, then a two piece and now back to being a three piece again, new member James adds flesh to their sound with keys, guitar and vocals creating a magical point between Ash’s insanely heavy beats and Thom’s freakout vocals. Their energy and melodic dynamism infects the crowd and I have no doubt they won over virtually everyone in the room. Job done.

Floridians’ Torche have spent much of their eleven years together confounding expectations with every album they release. 2008’s ‘Meanderthal’ being my personal highlight with it’s pop/doominess finding a focus that in all honesty they have struggled to replicate. Last years release, ‘Restarter’ saw them relight and refocus on efforts that got lost on the 2012 album, ‘Harmonicraft’. Tonight’s set though fails to hold my attention for long. The heat within the Bierkeller is getting stifling due to the amount of bodies and the band’s usually poppiness falls short as I failed to tune in. So much so, I opt to get some air and cool down at the venue’s entrance with the smokey crowd who have chosen to do the very same.

Finally Red Fang take the stage and proceed to whip up the kind of frenzy of fist pumping and crowd sing alongs that is their staple, delivering a powerful fifteen song set of thunderous proportions. Opening with ‘Wires’ and ‘No Air’ the band are on a all out assault, with singles such as ‘Crows In Swine’ and ‘Blood Like Cream’ heralding with the biggest response from the audience that are reveling in the sweaty beer-soaked atmosphere. New song, ‘The Smell Of Sound’ from their new album mashes all their influences into an anthemic wall of sound with both Aaron and Bryan’s vocals merging perfectly. It’s so hot in this place I opt to calm my palpating heart at the back of the venue in front of their massive fans that unless you stand in front of them, don’t seem to be making any difference to the blistering heat. Their encore of, ‘Dirt Wizard’ and the mighty favourite, ‘Prehistoric Dog’ leave the crowd sodden but satisfied. Nailed.