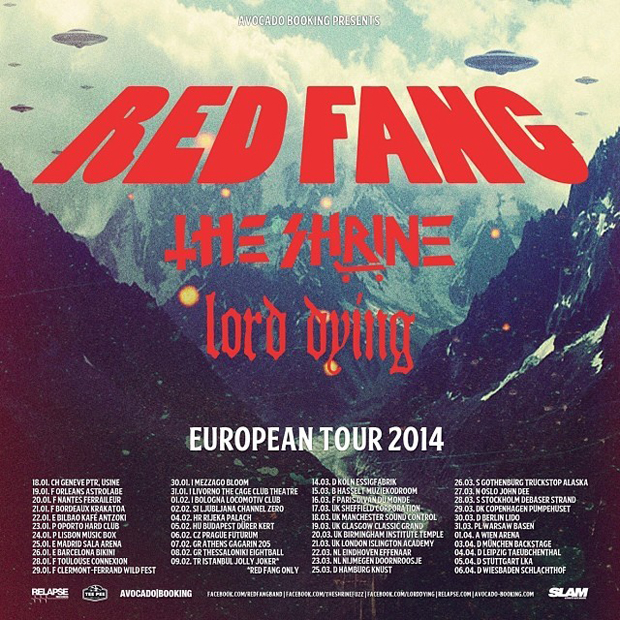 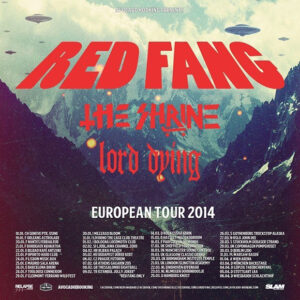 Portland warriors and hard rock legends, Red Fang, have been raging through Europe on their whirlwind tour. Tonight is the night they visit Birmingham and, just like the last time they played here, the venue is sold out. Hold onto your beard, because things are going to get messy.

Lord Dying are first to take to the stage and set the pace with their stomping beats and chugging riffs. It’s their first time in the second city and probably won’t be their last, judging from the head banging of those in the crowd.

Next up are three piece wonder The Shrine, playing what they call psychedelic violence rock and roll. The high energy set packs a punch with its catchy tunes that discuss a range of emotive themes from love to frustration.

‘How you feeling?’ Josh, the vocalist questions, ‘You guys ready for Red Fang?’ The roaring response from the audience suggests that they are.

As the set is changed a banner lit in green with the picture of U.F.Os is revealed and Red Fang step out onto the stage. The crowd scream as the beat of the drums and the sound of distortion signify the start of what will be an epic gig.

Despite worries about the mic both Bryan Giles and Aaron Beam’s vocals sound flawless- well as flawless as gritty, screaming sounds! The combination of their raw, hard hitting words gives great variation throughout the show  – and so does the set-list. From ‘Dirt Wizard’ to the band’s latest single, ‘No Hope’, Red Fang play something that everyone can head bang to, no matter what the era.

The band say very little as they dive into the heart of their set. They don’t need to speak, their music carries them seamlessely through the performance. However, Bryan does question; ‘You feeling good?’ before smoothly stating, ‘I’m feeling pretty damn good myself.’

It’s clear that everyone in the room is completely consumed by the music. The four band members are ruled by their instruments, putting everything they’ve got into their performance whilst the crowd thrash around, turning the room into one large mosh pit. Beer is thrown, fists are raised and a good time is had by all.

After an amazing set, the fans want more and screaming at the stage they demand the band to return.  And finally, they do, strumming the riff to the one and only ‘Prehistoric Dog’. This is what many have been waiting for. The room explodes as both band and fans give it everything they’ve got.

Red Fang raise their guitars one last time, before leaving the stage. It’s gonna take some doing to beat a show like that.