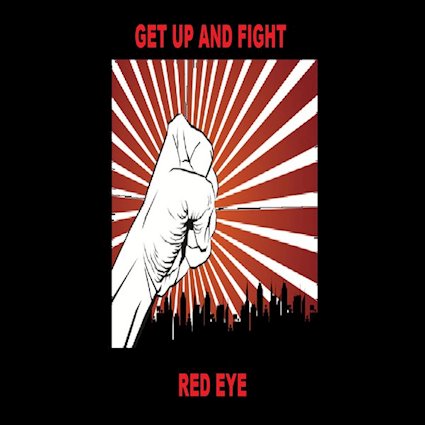 Red Eye aka Trevor Perfect has released his new single, the Brexit inspired ‘Get Up And Fight. Red Eye is centred on the music and lyrics of Trevor Perfect and features guest vocalists. Trevor plays all the instruments, slowly building up tracks and adding each instrument, layer by layer, until the song is complete.

Inspired by Heaven 17’s ‘(We Don’t Need No) Fascist Groove Thing’, the challenge was on to make a far more up beat track compared with the previous Red Eye songs/melancholic ballads. The result was ‘Get Up And Fight’.

According to Trevor his objective when writing it was:

“targeting apathy rather than advocating violence. It’s aimed at protesting, mobilising and creating a physical and visual opposition to injustice. As Billy Bragg once wrote “wearing badges is not enough on days like these”. These days, neither is a website/internet petition – we need to “Get Up and Fight”.

These are becoming tough times with the rich getting richer and the poor getting poorer. Many people, young people in particular, are suffering from low wages (which fail to keep up with inflation), are unable to buy a house, have to pay further education/university fees, and are suffering from zero hour contracts and the gig economy. So it was young people, in particular, that I had in mind when I wrote the song.Whilst I don’t advocate violence, actual physical protests can, and have, achieve change and influence events. We are now in times when positive change is becoming more and more necessary. Especially as voting fails to result in any realistic or significant change in many parts of the world. Plus, while voting is important, and it’s vital that more young people vote, the lyrics “Get Up and Vote”might not have had the same impact!

Having written the song, finding vocalists who could perform the chants and inject some real passion and enthusiasm into the song, was never going to be easy. Then I saw the ‘Happy Freuds’ playing a gig in Spain and was totally impressed.

These are “one take” recordings, whether live in the studio or from gigs. Music is intentionally produced with a minimum of overdubs or fixes.

The final words are from the poem “The Masque of Anarchy” (or the Mask of Anarchy) which is a political poem written by Percy Bysshe Shelly in 1819 following the Peterloo massacre of that year. It is perhaps the first call for freedom and perhaps the first modern statement/poem of the principle of nonviolent resistance:

“Rise like lions after slumber, in unvanquishable number. Shake your chains to earth like dew, which in sleep had fallen on you: ye are many – they are few!”