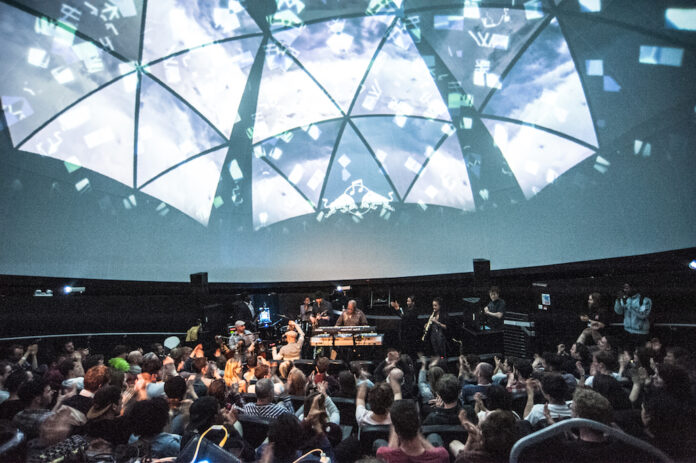 NOTE: THIS REVIEW HAS NOW BEEN UPDATED WITH THIS VIDEO FROM RBMA OF THE EVENT…MORE DETAILS CAN BE FOUND ON RBMA’S WEBSITE HERE.

We round up our coverage of RBMA’s Bristol weekender with a rather special celebration of Lonnie Liston Smith by Gilles Peterson.

In a sit down interview performed with Lonnie, he regaled his tales of hooking up some of the Jazz luminaries he has recorded and performed with. He played acoustic piano as a sideman for Pharoah Sanders, Rahsaan Roland Kirk, Betty Carter and Gato Barbieri but turned to fusion when Miles Davis hired him as an electric keyboardist in the early 1970’s. By 1973, Lonnie was ready to lead a band of his own and formed the Cosmic Echoes with his brother, singer Donald Smith. Lonnie made his recording debut as a group leader with 1973’s ‘Astral Traveling’. He continued to produce fusion crossed with funk, realised in 1974’s ‘Cosmic Funk’ and 1975’s ‘Expansions’, which he is here to perform this evening.

As we all prepare for take-off, Lonnie is joined by a hand picked selection of musicians from the UK and the US to help him take us to the stars. The lights dim and the Planetarium domed ceiling begins to rain down the stars above in a magical show where the surroundings could be more fitting. The iconic triangle rhythm that begins the track strikes up and unleash the funky soulful vibes. Geometric shapes move in time to the music, as the seriously talented English R&B and Soul vocalist, Terri Walker truly amazes as she sings the lyrics with such presence.

“Expand your mind to understand we all must live in peace on earth.”

We are treated to four exceptional performances of the track, with the musicians improvising and developing the themes, displaying their virtuoso performances with such soul. Words don’t do it justice really. Lonnie is a pioneer in the field of what has become known as ‘Space Jazz’ and as we travel through the galaxy which passes above our heads, I can’t stop smiling at the truly beautiful vibes that are in the room. A truly unique performance of a classic by one of the greats.