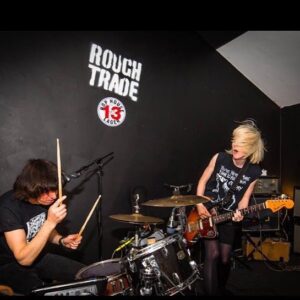 If the sun shines on the righteous, those who are attending Rough Trade Nottingham on Record Store Day, either as part of the 150-strong queue that snaked around the building in the early hours for vinyl purchasing or to drink in the wonderful array of free live music from midday onwards, must be a truly righteous bunch. Skin is on show and spirits are high on this bright and sunny day, put together with all the expertise one would expect from Rough Trade. Here are some of my highlights from the afternoon (in chronological order, not order of preference) – all female-fronted acts in a line-up in which women dominated the afternoon, a breath of fresh air considering the debate around male-dominated music events.

After a hectic morning soundtracked by general Queen of Nottingham, DJ Stiff Kittens, by midday Rough Trade had quietened a little. Those are there are enthusing greatly about opening act, Korean indie-poppers Say Sue Me – “you have to check out Say Sue Me, you look like you’d love them!” someone enthuses to me almost as soon as I walk through the door. They aren’t wrong. Full of jangly charm and infectious delight, it would be impossible not be won over by the quartet. They seem to have amassed quite a cult following since forming in 2012, and witnessing them here today its not hard to see why, leaving me delighted I showed up early.

Nottingham duo You Want Fox were the first band I really wanted to see, but my on-the-day decision to show up early means that by 3pm I’d already managed to catch excellent sets from the aforementioned Say Sue Me and Bristol four-piece Tax The Heat, got my ears around the excellent between-bands DJ set of DirtyDiscoSoundsystem, and absorbed both plenty gin mixed with pineapple (trust me on that one) and rays of sunshine on the front of a very lively Rough Trade. By the time You Want Fox take to the stage, anticipation and enthusiasm is running high, and they certainly don’t disappoint. Bassist and vocalist Natalie Caulton and drummer Collette Elton have a unique chemistry which drives their live act alongside their collection of adrenaline-fuelled, riot-grrl meets garage-rock records. They manage to nail the balance between excitingly primitive and perfectly professional – the fact Caulton is seven months pregnant and Rough Trade is like a sauna today doesn’t make a dent in their set – and its easy to see why they have been such a bolt of excitement to the Nottingham music scene.

From one dynamic duo to another, The Lovely Eggs make the perfect follow-on act from You Want Fox. Their set has clearly been eagerly awaited – in the build-up to their stage time, Rough Trade moves from relative calm to being completely jam-packed. Ahead of their set at larger venue the Maze that night, The Lovely Eggs are suited to the small, enthusiastic surroundings of Rough Trade. Playing a set that mainly comprises material from the new ‘This Is Eggland’ album (LTW Review), the crowd hang on to every note. They may have picked up an image very much rooted in the indie-pop tradition, but the newer material has seen them evolve into something more full-on and this is reflected in their powerful live set. Holly Ross’s vocals have grown far more primitive since their earlier material (and even more so since her days fronting Angelica), in reflection of her incredible confidence as a frontwoman. Her and David Ross give such a complete performance that the casual listener would find it hard to comprehend that such an impressive sound could be turned out by just two people.

Its hard to talk about The Orielles and avoid clichés about youthful charm, but that really is what they have in droves. The teenage trio play an impressive set of melodic indie tracks with delightfully oblique and inventive lyricism –the jangly guitars and Esme Dee’s sweet vocals mean they sound like a John Hughes soundtrack, but lyrically they owe more to David Lynch with their branch of otherworldy neo-noir surrealism, and as a live act they sound astonishingly accomplished not just for a band so young, but for one so new. Stardom surely awaits.

As I have previously mentioned, there has been much debate this year about the somewhat male-centric nature of many festival bills etcetera, and some of the organisers who have been a part of this controversy could certainly learn something from Rough Trade Nottingham’s Record Store Day line-up.

All words by Amy Britton. More can be found on her archive at www.louderthanwar.com/author/amy-britton or via twitter as @amyjaybritton. Photography by Shaun Gordon who can found on twitter via @_SGphotography