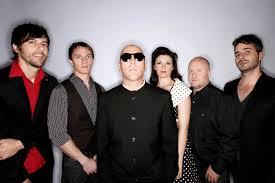 One rarely goes to the comments section of Youtube for reasoned insight, but beneath the video for Puscifer’s excellent recent single ‘The Remedy’ someone has queried “Is there anything Maynard does that isn’t fucking awesome?”, and it must be conceded that the point is a pertinent one.

Having previously fronted multi-million-selling alt-rock monoliths Tool and A Perfect Circle, vocalist and professional enigma Maynard James Keenan applied his shape-shifting talents to reach yet another peak with Puscifer. Initially a darkly absurdist side-project which almost defied the listener to take it seriously, the bizarre wigs and frequent sense of the puerile employed were perhaps attempts to deflate the air of great seriousness which surrounded Keenan in his other bands. Amid a sprawling cast list of collaborators 2007’s debut album ‘V Is For Vagina’ corralled a myriad of introspective styles, while 2011’s follow-on ‘Conditions of My Parole’ belied its awful cover artwork with increasingly majestic musical contents. A band of sorts began to coalesce too, notably with Wolverhampton ex-pat Carina Round forming a symbiotic dual vocal with Keenan.

With Tool creaking back into action after a long hiatus and Keenan’s Arizona winery sideline occupying his time, these extremely rare European dates offer a chance to catch one of rock music’s most fascinating talents.