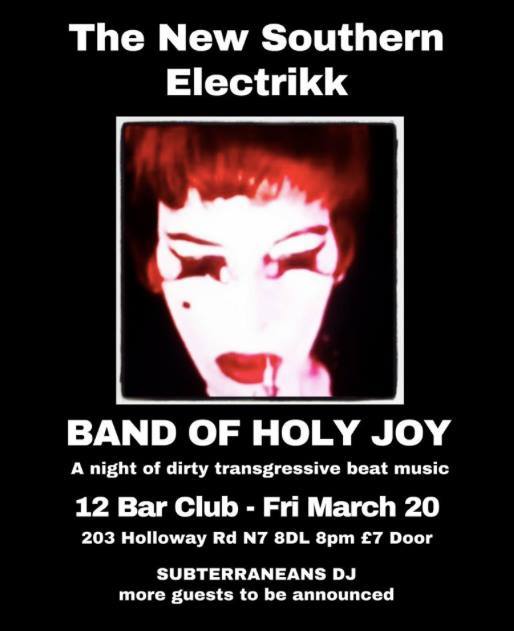 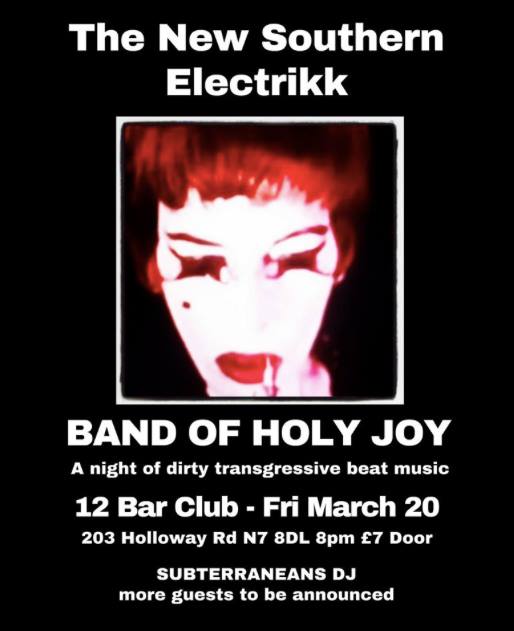 Band of Holy Joy and The New Southern Electrikk will be playing the 12 Bar Club, Holloway Road, London on March 20th 2015. Support comes from Subterraneans DJs

Advance tickets are available and there will be a limited number of tickets on the door.

This promises to be a very special event, with two of the UK”s most exciting and compelling live acts sharing the same bill.

Signed to Louder Than War Records, The New Southern Electrikk cannot be easily categorised. Drawing inspiration from Psychedelia, Krautrock and Post-Punk, the band craft dark, mesmerisingly beautiful melodies driven by grinding, sexy undertones. Monica’s vocals can be as ethereal as they are deep and soulful; capturing her audience in the palm of her hand, her voice is sinister yet alluring.

Zach’s flowing guitar shimmers over Tajti’s gritty, throbbing basslines with Rikki’s keys and backing vocals providing a darker edge. Jim’s drumming is brooding and purposeful giving The New Southern Electrikk a solid base on which to build soundscapes that are visceral yet sultry.

Since then the band have scaled a few heights fallen down in one or two gutters, broken up, glued themselves together, toured the world, released a fair few albums for the likes of Rough Trade and fully explored other media by presenting two audio visual song plays: Troubled Sleep at the Shunt Theatre in London 2008 and an Invocation for William Burroughs at the Sorbonne Paris in 2009. They have set up their own label and Internet radio station Radio Joy.

These days the junk shop instruments of old are long gone, and guitars, violins and visuals very much to the fore. But the band continues to write about the same outsider concerns with the same measure of spirit and care and man, they still put on a show.
The Band of Holy Joy – forever changing, consistently unique, always the same. Join the adventure as they pass through your town.

‘Easy Listening’ is available on iTunes.