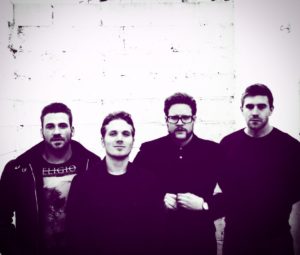 Louder Than War’s Ioan Humphreys reviews another brilliant tune from one of his favourite social media finds in the form of Recessive Genes.

Recessive Genes are a four piece goth punk band from North London and I reviewed their last release here. As mentioned in their first review, their self-proclaimed manifesto is to “make a short period of time, as eventful as possible”. Well looking at this latest release, as well as their last, I think they are so far living up to their manifesto to the letter. And with the least bit of self-respect! I fucking love them for that.

The track opens with an incessant throaty riff and pummelling drums that drive the swamp rock sludge that basically has a heart of gold. The verses are sung with a gorgeous disdain and the chorus is impossibly catchy. You will be singing the refrain of “I need to analyse my shit” for days.

The dream team of Jonny (drums) and brothers Matt (bass/vox) and Oliver (guitars), and James (vox/guitar) seem to do no wrong in coming up with (in this case particularly) spot on observations about modern life, set against a comic backdrop of an odious charlatan TV dietician.

With the lyrics of “I’m not the man you think I think am”, Recessive Genes may be touching on feelings and emotions closer to home. Possibly, but they work perfectly alongside the character assignation of the beloved quack.

Once again we have an unremitting noisy, bassy and bolshie track which only makes me expect great things from their debut album. Recessive Genes’ debut album was recorded by Mark Jasper from Witching Waves at Soundsavers in Hackney and will see the light of day very soon.

In the meantime, enjoy this track and the previously reviewed one and let Recessive Genes into your life. You won’t be disappointed.