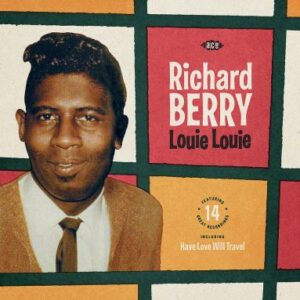 This is a real cause for uninhibited celebration! Here are fourteen crucial recordings that LA raised singer / songwriter / performer Richard Berry (1935-1997), the legendary R&B author of the immortal rock ‘n’ roll standard ‘Louie Louie’, recorded for the Flip, Flair and RPM labels between the mid 1950s and early 1960s, compiled by Roger Armstrong for an Ace red coloured vinyl album.

If there were any justice in the world, Richard Berry would have been universally recognised as one of the prime architects of the musical phenomenon that became labelled rock ‘n’ roll many decades ago. On the strength of the 1957 hit ‘Louie Louie’ alone, a song covered by countless bands, from The Kingsman to Iggy & The Stooges, Berry should have enjoyed much of his life as a famous and wealthy man. Unfortunately, Berry had to sell the rights to the song for a paltry $750 bucks to pay for his wedding. That’s show business, or so it was for many groundbreaking African-American artists in the USA during the 1940s and 1950s.

Yet there is much more to Berry than ‘Louie Louie’. ‘Have Love Will Travel’ (fiercely covered by redoubtable 60s garage punks The Sonics, who also recorded one of the most distinctive versions of ‘Louie, Louie’), is prime vocal harmony propelled rhythm & blues. So is every other song on this album (featuring Berry’s recordings with The Flairs, Jennell Hawkins & The Lockettes, The Pharaohs and The Dreamers), sometimes blended with a trace of mambo fever – the rollicking ‘Big John’ and Berry’s heavenly version of ‘Besame Mucho’. Then there are Berry’s unforgettable narrative numbers, either humorously relating an unfortunate date, ‘Oh! Oh! Get Out Of The Car’, or hard times blues in ‘Next Time’.

Berry was the real deal, all the way down the line, effortlessly producing sassy, danceable and rebellious rock ‘n’ roll before The Man neutered it. Only a master of the form, such as Richard Berry, could conceive of such a wonderfully unhinged rocker as ‘Yama Yama Pretty Mama’. Thrown in an extremely cool, period style colour sleeve and, hey presto, Louie Louie is an essential purchase – especially since Ace’s last 1982 Berry vinyl compilation, Get Out Of The Car, was deleted many moons past.

If you only buy one reissue compilation album on vinyl this year, make sure it is this one. Play Louie Louie loud and often, and wonder why there isn’t a statue erected to Richard Berry’s memory in Central Los Angeles. 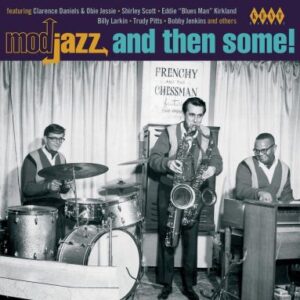 Various Artists – Mod Jazz And Then Some!

Remarkably, the 8th volume in Ace’s illustrious Mod Jazz series, and the standard is still as imperiously high as previous volumes. Compiled and noted by Ady Croasdell and Dean Rudland, Mod Jazz And Then Some! once again collects all the cool tracks that the original, sharp suited and booted Mods would have, or should have, been dancing to in London’s Soho clubs during the early 1960s.

Opening with the dynamic and previously unreleased Floyd White number ‘Another Child Lost’ (recorded in 1965 for the Invader label), Mod Jazz And Then Some! continually delivers the highly danceable jazzy R&B material that inspired a way of life. The Reuben Wilson Quartet’s 1961 instrumental ‘Cooking In Grease’ sounds as good as the title, as does B.B King’s stomping 1962 number ‘Pootwangie aka 3 O’clock Stomp’. The hits just keep coming; ‘Shirley Scott’s 1962 grooving organ workout version of Horace Silver’s ‘Sister Sadie Part 1’ and the self explanatory ‘Bossa Baby’ by Googie Rene & His Combo are among the highlights. 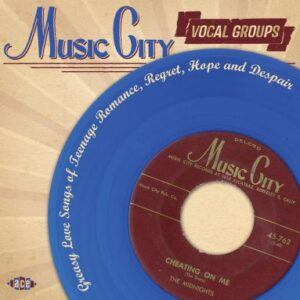 Alec Palao’s 2011, 3 CD compilation of 75 odd tracks produced at Ray Dobard’s Music City Records in Berkeley, California, over the Bay from San Francisco, was a classic Ace release. Covering a period of 25 years, from the early 1950s until the mid 1970s, the collection of street level rhythm & blues, doo wop vocal groups and soul which black entrepreneur Dobard recorded, above his record shop premises, Music City was an incredible introduction to the labels obvious abundance of musical riches.

Like Dobard’s other recordings, the quality might be raw, rough and ready, but the doo-wop groups he put on tape were all totally committed and bountifully soulful. This outstanding double CDs highlights are numerous, with many tracks previously unreleased: The Pagans’ gorgeous version of Clyde McPhatter and the Drifters’ ‘Lucille’, The Gayteens mournful ‘Down By The River’, The 5 Rovers’ gospel influenced ‘Down To The Sea’ and a fine cappella version of the Moonglows’ ‘Ten Commandments Of Love’ by The Five Crystels are among the vocal treasures unearthed by this groundbreaking compilation.

Music City Vocal Groups: Greasy Love Songs Of Teenage Romance, Regret, Hope and Despair is a must for any serious fan of doo-wop or those eager to discover the abiding allure of the music. 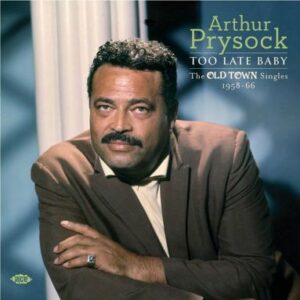 Compiled and noted by Tony Rounce, Too Late Baby collects the mellifluous, baritone voiced Arthur Prysock’s singles for the Old Town record label from the late 50s through to the mid 1960s. As Rounce’s compilation illustrates, the refined Prysock, a name well known to jazz and soul aficionados, could turn his hand to just about any musical style that took his fancy.

Prysock (1924- 1997) started performing in the 1940s and enjoyed a career in the music industry that lasted nearly 50 years. Listening to Too Late Baby it is easy to see why Prysock was rewarded with such longevity. Whether tackling laidback ballads (‘I Worry Bout You’, ‘Keep A Light In The Window For Me’, the standard ‘Ebb Tide’ and It’s Too Late, Baby Too Late’, surprisingly the only major 1965 hit the singer scored while on Old Town), Latin-flavoured soul (‘One More Time’) and novelty numbers such as ‘Crawdad’, Prysock could deliver the number with the utmost conviction.
Most surprising of all is the assurance with which the smooth balladeer tackles hardnosed R&B. Prysock’s versions of Willie Dixon’s raunchy ‘I Just Want To Make Love To You’ (1958) and Roy Brown’s ‘Good Rockin’ Tonight’ (1960) rock the house. If he wanted to, Prysock could have just sung two-fisted R&B all his days.

Arthur Prysock was simply a class act. Check him out.

Various Artists – Colour My World: The Songs Of Tony Hatch

Assembled and noted by Mick Patrick, Colour My World offers a fascinating overview into the hit making years of one of Britain’s principal songwriters, producers, arrangers and A&R men – Tony Hatch. Featuring an extensive, revealing and exclusive interview with Hatch, conducted by Patrick, and a foreword by Hatch’s greatest star, Petula Clark, Colour My World’s 8000-word booklet and CD is a near definitive account of a remarkable career and an insight into a Tin Pan Alley UK show business tradition that has now vanished.

One of the last of the great London Tin Pan Alley songwriters/talent scouts, Hatch, born in 1939, left school at 16 to work for music publishers Robert Mellin Music in Denmark Street. Having served his National Service in The Coldstream Guards, due to his musical abilities, Hatch steady established himself at the Pye label. Throughout the 1960s, Hatch’s career really took off. With Petula Clark (‘Downtown’, ‘A Sign Of The Times’, ‘Who Am I’), Scott Walker (‘Joanna’, the theme for the movie of the same name), Chris Montez (‘Call Me’) and The Searches (‘Sugar And Spice’, Hatch’s compositions and big productions helped define the international sound of UK popular music in the 1960s into the 70s.
Though Hatch’s immortal theme for Crossroads is conspicuous by its absence, Hatch’s memorable scoring work for television is well represented by the themes for ‘Man Alive’ and ‘Sportsnight’, performed by the Tony Hatch Sound and Tony Hatch Orchestra respectively. The fact that a legendary American singer such as Sarah Vaughan recorded Hatch’s upbeat ‘I Know A Place’ illustrates the sphere of his influence.

Colour My World stands equal to the many talents of Tony Hatch.