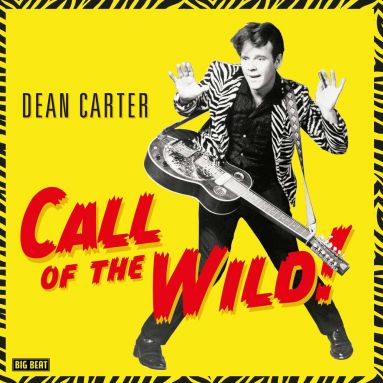 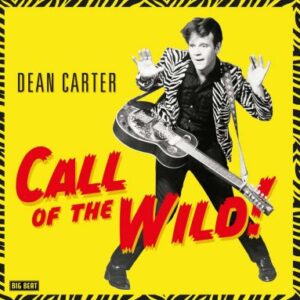 Dean Carter – Call Of The Wild!

Back in 2002, Ace issued a stunning CD, compiled and noted by Alec Palao, entitled Call Of The Wild!, containing a number of late 1960s recordings by the legendary rocker Dean Carter. Now, at last, the best tracks from that CD, many of them unreleased until 2002, are now released on a deluxe Ace coloured vinyl LP.

As the striking album cover portrait of Dean Carter makes clear, here was a man who didn’t give a damn about the prevailing trends of the day.  Sporting a lustrous quiff, an Elvis Presley-style pose with a guitar slung around his waist and an astonishingly cool zebra-striped jacket (the Marlon Brando line “This jacket is a symbol of my belief in freedom and individuality,” from the 1959 picture The Fugitive Kind, comes to mind), Carter looks like a rockabilly from the late 1950s, rather than a musician from the age of rancid Flower Power.  Yet his fevered 60s garage rockin’ music, which in many ways anticipates 70s punk, and his high dandy style pointed to the future: Bryan Ferry is wearing very similar garb on the inner sleeve of the 1972 debut Roxy Music album.

Not only one of the all-time great rock ‘n’ roll cover versions (alongside John Cale’s ‘Heartbreak Hotel’, Vince Taylor’s ‘My Baby Left Me’ and Link Wray’s ‘Good Rockin’ Tonight’), Dean Carter’s totally uninhibited 1967 assault upon ‘Jailhouse Rock’, which opens Call Of The Wild!, packs the kinetic raw power of ‘Tonight’ by MC5, Iggy & The Stooges’ ‘Shake Appeal’ or Sex Pistols’ ‘Satellite’. Such is the utter sense of abandon that Carter evinces that he succeeds in drawing out new potency in both Leiber and Stoller’s lyrics and music, knocking Elvis’ rendition into a cocked hat.

The Cramps brought a great deal of attention to Dean Carter’s cannon when their 1990 version of ‘Jailhouse Rock’ (featured on an NME compilation The Last Temptation of Elvis and the B-side of their ‘The Creature from The Black Leather Lagoon’ single) obviously drew more inspiration from his cover, rather than Presley’s, in their version. As contemporary interpreters, creators and conduits of unhinged rock ‘n’ roll The Cramps were matchless, but even they couldn’t quite attain the heights of demented fervour reached by Carter and his band in their execution of Leiber and Stoller’s song.  A fat roll of pounding drums from Dennis Elliot kick starts the number.  Jack Johnson’s screaming, juddering feedback guitar, Tom Harrington’s fuzzed electric piano that recalls the riff of Chris Montez’s ‘Let’s Dance’ in the chorus, producer Arlie Miller’s brother Ray on whacked out ukulele, his other brother on deviant accordion and their father on strident bass, subsequently enter the fray. This is all topped off by Dean Carter’s twisted electric 12-string dobro and his frenzied vocal delivery that at the close of the two-minute number drifts into incomprehensible yelling and beseeching.  Dean Carter’s version of ‘Jailhouse Rock’ alone should have earned him a place in rock ‘n’ roll Valhalla.

But there is more to Dean Carter, born Arlie Neaville of Illinois, than ‘Jailhouse Rock’.  ‘Rebel Woman’, ‘Jailhouse Rock’s original B-side, issued on Carter’s and Miller’s independent Milky Way label, is slow and mean, highlighting Carter’s lyrical obsession with tough biker ‘chicks’, repeated in his equally lurid ode to footwear, ‘Black Boots’. Side two of this album opens with the rip snorting garage punk of Carter’s 1967 composition, ‘Mary Sue’, a vital single the equal of The Seeds’ ‘Pushin’ Too Hard’ or The Sonics’ ‘Psycho’.   ‘I Got A Girl’, ‘You Tear Me Up’ and ‘Would You Believe’ are literally panting rocking odes to the female form, while the Elvis style ‘Don’t Try To Change Me’ and the ominous sounding title track reiterate Carter’s rebellious credentials.

Like many great rockers, we lost Dean Carter to the Lord a while ago. Today Arlie Neaville is a gospel-singing preacher who has apparently rejected his garage rockin’ past. Yet if there was ever anyone who deserved the title of an unsung hero of rock ‘n’ roll it’s undoubtedly Dean Carter.  Obviously, Call Of The Wild! Is a compulsory purchase.

Buy the album on vinyl here. There are links to buy it on CD and DL there too. 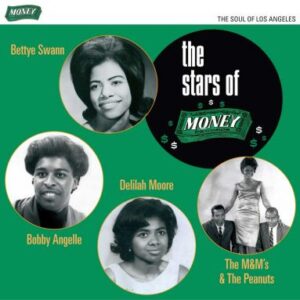 Various Artists – The Stars Of Money

Here is another deeply cool limited edition vinyl release from Ace – a four track 45 rpm EP featuring key artists from the celebrated LA soul label, Money. If you were looking for original copies of these tunes on vinyl, you’d have to be prepared to part with three figure sums.

First up is Money’s premier star, Bettye Swann. Swann scored a big R&B hit with her single, ‘Don’t Wait Too Long’.  Inexplicably, the excellent follow up, ‘The Man Who Said No’ featured here, didn’t sell as well, hence the high value of the original single. Next is Money’s top male star, Bobby Angelle, with ‘I’ll Be A Soldier Boy’.  Angelle’s surprisingly upbeat tune, considering that the protagonist is probably waiting to be sent to the jungles of Vietnam, uses the same backing track as his big Northern Soul anthem, ‘Too Much For You’.   This is the first time the previously unissued ‘I’ll Be A Soldier Boy’ has been released on vinyl.

The flip side opens with the wonderful 1964 tune ‘Lil’ Valley’ by The M&M’s & The Peanuts.  Originally the B-side of the equally 1950s doo wop flavoured ‘Open Up Your Eyes’, ‘Lil’ Valley’ surprisingly takes on the themes of turf wars and gang fights. Fans of early Rudy Ray Moore cuts will dig The M&M’s & The Peanuts.  The Stars Of Money concludes with the 1972 sumptuous soul of Delilah Moore’s ‘I’ll Just Walk Away’.

If Northern Soul is your bag, then you need this EP.

Buy the vinyl 7″ here. There is also a link to buy it on digital there too. 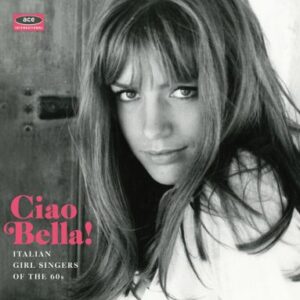 Compiled and noted by Mick Patrick, this is a fabulous collection of hip Italian girl-pop from the 1960s.  Featuring 24 tracks on CD and 12 on a beautiful vinyl edition, this Ace International compilation amply illustrates that London wasn’t the only city in Europe swinging in the 60s.

Obviously of great interest are three tracks (two on the vinyl edition) orchestrated and arranged by the great Italian soundtrack composer, maestro Ennio Morricone.  These Morricone numbers are Rita Monico’s aptly named second single ‘Thrilling (La Reola Del Gioco)’ from the Morricone soundtrack of the film of the same title, the eminent Mima with the soaring ballad ‘Se Telefonando’ and another Monico song, the haunting ‘Non E Mai Tardi’, an excellent cover of the Shangri-Las’ 1966 classic ‘Dressed In Black’.

As exciting as these tracks are there is much to discover within Ciao Bella!  Brunetta was one of the first Italian singers to record a rock ‘n’ roll record in 1959.  By 1966 Brunetta was performing the archetypical 60s dance craze number ‘Baluba Shake’, the opening of which sounds like The Cramps.  Caterina Casselli delivers a very persuasive 1965 version of Big Joe Williams’ ‘Baby Please Don’t Go’ (‘Sono Qui on Voi’), which gives Them a run for their money. Ornella Vanoni’s epic 1967 ‘Il Mio Posto Qual’e’ brings a psychedelic flavour to Italian pop with inventive use of the sitar, while Carmen Villani’s driving ‘Questa Sinfonia’ cheekily drops the main riff from The Rolling Stones’ ‘(I Can’t Get No) Satisfaction’) into a string arrangement.

Very easy on the eye and ear, Ciao Bella! Is magnifico from start to finish.

Buy the album on CD here and the vinyl here. 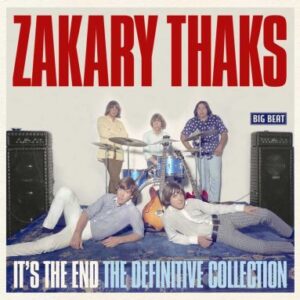 Texas has certainly produced to its fair share of great bands, and the Zakary Thaks are undoubtedly one of them.  Their punchy and dynamic garage punk 1966 Mercury single ‘Bad Girl’ was included on the second volume of the influential 1979 bootleg compilation, Pebbles. This ensured their status as garage rock legends.  For the first time archivist and liner note writer Alec Palao has assembled the definitive Zakary Thaks anthology, based upon the band’s original master tapes.

Hailing from the Gulf Coast port town of Corpus Christi, Zakary Thaks evolved from the surf band The Riptides and The Marauders.  Inspired by the British Invasion bands of the era, especially The Kinks (Ray Davis’ ‘I Need You’ was the B-side of ‘Bad Girl’) and The Yardbirds, the young, energetic band recorded a series of singles for the local J-Beck label.  The major label Mercury would eventually pick up the powerhouse ‘Bad Girl’ (you can hear how this track might have influenced the attack of Richard Hell and The Voidoids’ ‘Liars Beware’), but the other Zakary Thaks J-Beck records are equally dynamic.  The 1967 cuts ‘Face To Face’ and ‘Won’t Come Back’ and ‘Can You Hear Your Daddy’s Footsteps’, with their fuzz tone guitars and rebellious lyrics, forever define teen desire and angst.

Buy the album on CD here. 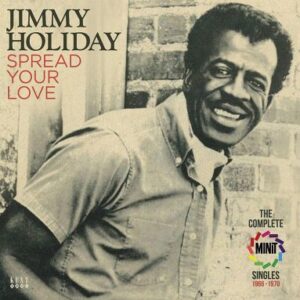 As the title suggests, this is an excellent overview of soul singer songwriter Holiday’s tenure with the New Orleans based Minit record label during the late 60s.  Compiled and noted by Tony Rounce, Spread Tour Love eloquently makes the case that the work of Jimmy Holiday should be as well known as his contemporaries Marvin Gaye or Otis Redding.  Born in Mississippi on 24th July 1934, Holiday wrote songs covered by the likes of his mentor and friend Ray Charles, James Brown, Jerry Lee Lewis and Jackie DeShannon, yet he never really received the widespread recognition he was richly deserved as a performer.

Holiday’s rich velvet tones are equally fitting for the fragile beauty of his great ballads (‘Baby I Love You’, ‘The Turning Point’, ‘Everybody Needs Help’) or his jubilant up-tempo dance numbers (‘You Won’t Get Away’, ‘I’m Gonna Move To The City’, ‘Spread Your Love’)

One of the most surprising Holiday compositions featured here is ‘I Wanna Help Hurry My Brothers Home’, a 1967 Vietnam War song that simultaneously expresses discontent with the disproportionate number of black and white Southerners being sent to the front and tries to muster patriotic fervour for Uncle Sam. Another unusual but brilliant Holiday offering is his stunning version of Lefty Frizzell’s 50s country honky tonk anthem, ‘If You’ve Got The Money I’ve Got The Time’, which even features some Emmett Miller-style yodelling.

Buy the album on CD here.