1. Various Artists – The Pop Genius Of Mickie Most. 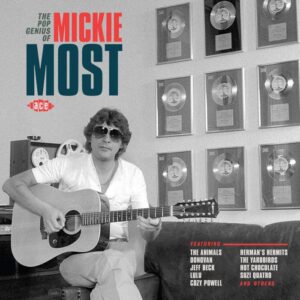 Ace have surpassed themselves with this fittingly lavish, 25 track CD career tribute to record producer, entrepreneur, pop-picker, television show pundit, popular music impresario Mickie Most (1938-2003). Diligently compiled and noted by Most’s biographer Rob Finnis (the box package features a 72-page booklet, filled with pictures of artists and memorabilia), this fantastic compilation outlines the irresistible rise of the true King of Pop, Mickey Most.

Born Michael Peter Hayes in Aldershot, Hampshire and raised in Kenton, Middlesex, in his mid-teens Most wanted desperately to escape the stifling confines of suburbia. In 1957, London’s birthplace of British rock ‘n’ roll, the 2i’s café on Soho’s Old Compton Street (which supposedly launched the career of Tommy Steele) became Most’s second home. He changed his name (‘the most’ was his favourite catchphrase), learned to play rudimentary guitar and stepped on to the stage as a rock ‘n’ roll performer. A deal with Decca Records, as one of The Most Brothers, ensued. A chance meeting with his future wife Christina at the 2i’s, led Most to her home in South Africa for four years, where he enjoyed some success as one of the few rock ‘n’ rollers in the country.

By the early 60s, Most realised that his real talent lay in the field of production, rather than as a performer. He returned to England with his new family and using his track record as a chart act, forged a highly lucrative partnership with EMI as an independent producer. Most quickly clocked the major changes transpiring within the British music scene (he witnessed the ascent of The Rolling Stones, supporting them on a Don Arden UK rock ‘n’ roll package tour) and seized the moment. Within a few months in 1964, Most had produced huge hits by The Animals (the timeless epic ‘The House Of The Rising Sun’), The Nashville Teens (the stomping ‘Tobacco Road’) and a run of US smash hits with Herman’s Hermits (represented here with their 1966 single ‘No Milk Today’).

In 1970, Most was once again ahead of the curve. He formed the RAK label and music publishing, releasing smash hits for the glam rock age with Hot Chocolate (the race conflict saga ‘Brother Louie’), Suzi Quatro (the barnstorming rocker ’48 Crash’), Cozy Powell (the satanic instrumental ‘Dance With The Devil’), Arrows (‘I Love Rock ‘n’ Roll’ – covered by Joan Jett as a US Number One hit) and star session guitarist Chris Spedding’s 1975 proto punk-pop rocking single, ‘Motor Bikin’’. Not long after igniting Kim Wilde’s career in the early 80s with ‘Kids In America’, Most sensibly decided that the 1980s pop scene wasn’t one he could relate too and he retired, a very wealthy man.

The Pop Genius Of Mickie Most stands as a fitting testament to the man’s life and work. 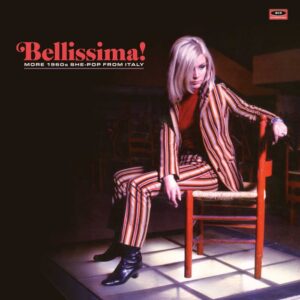 A fantastic follow up to Ace’s incredibly popular 2015 compilation Ciao Bella! Italian Girl Singers of The 60s, Bellissima! More 1960s She-Pop From Italy (once again very adeptly compiled and noted by Mick Patrick) could be even better.

Among the best tracks are dynamic cover versions by less well-known singers. La Ragazza delivers a slinky rendition of Sonny & Cher’s ‘The Beat Goes On’ (‘Il Beat… Cos’E?’), Casterina Caselli sings an emotive version of David McWilliams’ 1967 hit ‘Days of Pearly Spencer’ (Il Volto Della Vita’) and the stylish cover star of Bellissima, Patty Pravo, sings the Italian song ‘Ill Paradiso’ – made into a huge English language hit as ‘(If Paradise Is) Half As Nice’ by Amen Corner.

This compilation is available as a 24 track CD, but it’s the beautiful 14-track white vinyl edition, with a very colourful inner bag, that you will want to own. 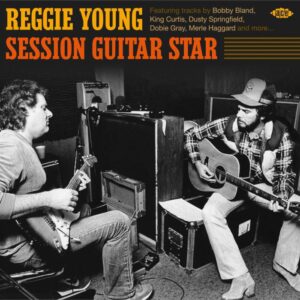 An outstanding summary of the lustrous six-decade-long career of the legendary Nashville and Memphis session guitarist, Reggie Young. Veteran player Young, who contributed to this CD (compiled with Bob Dunham), providing personal photographs, quotes for the booklet and shaped the superb track selection, sadly died on 17th January 2019.

As related in Bob Dunham’s notes, Reggie Grimes Young was born on 12th December 1936, in Caruthersville, Missouri, but grew up in Arkansas. His father, who played Hawaiian guitar, presented Reggie with his first guitar on Christmas Day 1950. A year later, Reggie had his own band, absorbing the work of such disparate players like Django Reinhardt, Chet Atkins and B.B. King. One of the first recordings to feature Reggie Young’s hot licks was the storming 1956 Mercury records rockabilly classic ‘Slip, Slip Slippin’ In’, by Memphis singer Eddie Bond & His Stompers, when opens Session Guitar Star. 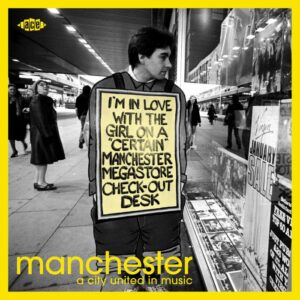 This marvellous double CD, covering 55 years and featuring 45 compositions, underscores Manchester’s status as the major musical city of the UK, second only to London. Compiled by Ady Croasdell and comprehensively noted over 44 pages by Manchester musician/ music historian C. P. Lee, with an introduction by former Manchester resident and celebrated author Jon Savage, this compilation includes all the musical genres that have emerged from the city since the early 60s – big beat, punk, post-punk, soul, disco, ‘baggy’ and rock.

Opening with Ewan MacColl’s ballad ‘Dirty Old Town’, to reflect the impact of the Industrial Revolution had upon Manchester, A City United In Music reflects the music of the 1960s beat boom – Pete MacLaine & The Clan’s assertive ‘Yes I Do’, Freddie & The Dreamers’ plaintive ‘If You Gotta Make A Fool Of Someone’, The Hollies’ wistful ‘Baby That’s All’ and the driving John Mayall & The Blues Breakers’ ‘Crawling Up A Hill’.

Big hits by the likes of Wayne Fontana & The Mindbenders (‘The Game Of Love’), 10cc (1975 smash ‘Life Is A Minestrone’) and Happy Mondays (‘Kinky Afro’) are mixed with lesser known acts (the emotive 1964 single ‘I’m Gonna Jump’ by The Toggery Five, Wynder K. Frog’s 1967 organ driven cover of Traffic’s ‘I’m A Man’ and The Dakotas’ strutting ‘The Spider And The Fly’). Punk (Buzzcocks’ ‘Orgasm Addict’, Slaughter & The Dogs’ ‘You’re A Bore’) and post-punk luminaries (The Fall ‘s venomous ‘Leave The Capitol’, Joy Division’s ‘Dead Souls’, Magazine’s anthemic ‘A Song From Under The Floorboards’ and Smack’s amusing ode to the actor ‘Edward Fox’), broaden even further the scope of A City United In Music.

An eclectic musical experience that ranges from Georgie Fame & The Blue Flames (the swinging ‘In The Meantime’) to Oasis (the boisterous ‘Rock ‘N’ Roll Star’), A City United In Music proffers an impassioned and ruminative overview of Manchester’s contemporary music and the musicians who created it. 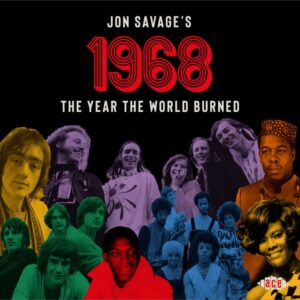 The fourth double CD compiled and noted by Jon Savage, in a series that look back at the incendiary years of social and political upheaval during the late 1960s, through the prism of the popular music of the day, is to the same incredibly high standard as his previous offerings.

Revolution was in the air throughout 1968. In America protest increased at the bloody and purposeless Vietnam War, against a backdrop of riots and political assassinations. In France, the May ’68 student riots shook the drained government of Charles de Gaulle, while in the UK youth struggled for a new moral autonomy against a backdrop of intolerance reflected within MP Enoch Powell’s utterly irresponsible Rivers of Blood speech.

Highpoints include James Brown’s insistent ‘Say It Loud! – I’m Black And I’m Proud (Pt 1)’, Archie Bell & The Drells’ dance classic ‘Tighten Up’, Aretha Franklin’s definitive reading of Burt Bacharach and Hal David’s ‘I Say A Little Prayer’, Kenny Rogers & The First Edition’s bad LSD trip country version of Mickey Newbury’s ‘Just Dropped In (To See What Condition My Condition Was In)’ and Sly & The Family Stones’ entreaty for acceptance, ‘Everyday People’. Arguably, the single that captured the mood in the UK perfectly that epochal year was The Crazy World Of Arthur Brown’s glowering rocker, ‘Fire’.

Fittingly, Savage’s inflammatory account of 1968 closes with The MC5’s previously unissued version of ‘Kick Out The Jams (Preview Pressing)’. This is the raw, rabble-rousing single version of the infamous anthemic song, 500 copies of which were distributed free at the band’s Fillmore East gig on 26th December 1968. During the subsequent riot at the seditious gig, many copies of the 45 were thrown at the stage. Undamaged pressings of ‘Kick Out The Jams (Preview Pressing)’ must be worth a small fortune now.