Ian Johnston presents his latest roundup of vital releases from Ace Records, one of the best reissue labels in the world. 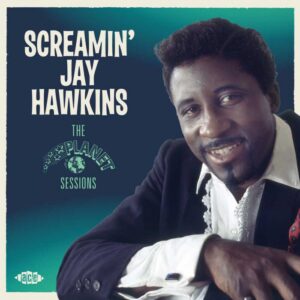 Jalacy J. Hawkins, who died on 12th February 2000, was truly a legendary figure in the annals of popular music. Screamin’ Jay Hawkins’ signature tune, the OKEH 1956 single ‘I Put A Spell On You’, a brilliantly unbalanced best seller which was recorded with singer and band in an advanced state of inebriation and was subsequently banned by many radio stations because it was deemed to sound “cannibalistic”. Down through the decades Hawkins’ decadent waltz time dance of the damned ‘I Put A Spell On You’ has been covered by just about everyone, from Nina Simone to Nick Cave & The Bad Seeds.

Hawkins was born on 18th July 1929 in Cleveland, Ohio. Placed in an orphanage by his mother, from where he was taken and subsequently raised by a tribe of Blackfoot Indians, Hawkins enlisted in the US Army in 1944, before entering the Army Air Force. It was here his career as an entertainer began, playing tenor sax to GIs. This was not his only talent. By the age of sixteen Hawkins had become a Golden Gloves boxing champion. Two years later he won the middleweight championship of Alaska by beating Billy McCann. The stubbornness of this last 1949 fight, and the injuries he sustained, discouraged Jay Hawkins from pursuing a vocation as a pugilist, so he turned all his attention to creating his own singular music. This happened first in 1952 with jazz guitarist Tiny Grimes and His Rockin’ Highlanders (the band all wore Scottish kilts on stage), followed by Johnny Sparrow and His Sparrows, supporting the incendiary R&B legend Wynonie Harris as his anointed protégé, before developing his ghoulish and shocking vocal delivery on the 1955 Mercury single, ‘(She Put the) Wammee (On Me)’.

Jay Hawkins’ outlandish dress sense and stage performances would only become more eccentric as he incessantly toured America. He either dressed up as an African chieftain or sported a green turban, shades, a pink tuxedo, a zebra cape and white shoes while jumping out of coffins, to the accompaniment of thunderous fireworks and flash boxes. In the process Hawkins inspired countless Rock ‘N’ Roll performers from Little Richard to Alice Cooper. Snakes, a cigarette-smoking skull on a stick called Henry, model severed hands, tarantulas and shrunken heads heightened the drama, and the subsequent outrage voiced by various concerned citizen’s committees and the National Casket Company.

Nevertheless, the singer’s stage act certainly proved popular with the female section of his audience. Hawkins had three children with his first wife, but was certain that he fathered at least another fifty children with an endless succession of girlfriends and groupies. Two years before his death, Hawkins married his ninth wife, a 29-year-old from Cameroon.

This fantastic Ace CD is the first sanctioned re-release of Screamin’ Jay’s incredibly rare second album, The Night and Day of Screamin’ Jay Hawkins. This belated follow up to his debut 1958 US LP, At Home With Screamin’ Jay Hawkins, was mostly recorded with session musicians at Abbey Road in London during May 1965, for producer Shel Talmy’s Planet label. Opening with Jay’s wonderful take on the Sinatra/Cole Porter standard ‘Night And Day’, The Night And Day Of Screamin’ Jay Hawkins magnificently demonstrates the sheer diversity of Jay’s songwriting and the white hot charisma of his baritone vocal performance. From the jailhouse blues of ‘Serving Time’, through the mambo rock ’n’ roll of ‘All Night’, the spooked lounge that is ‘In My Dream’, the jubilant swing of ‘I’m So Glad’, the plea for redemption ‘Please Forgive Me,’ to the unstoppable 60s groove of ‘Move Me’, Screamin’ Jay is a master of all the musical genres he touches. The bevy of alternative takes and outtakes, including an early version of the Hawkins classic ‘Stone Crazy’ (itself a variant upon his masterwork ‘Frenzy’), reinforce this perception.

The Seeds – The Seeds 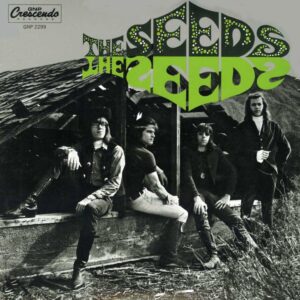 This astonishing deluxe double vinyl Big Beat/GNP Crescendo/Ace reissue of The Seeds’ eponymous LP features the unbeatable, hard-hitting mono mix, along with eight-bonus tracks (one of which, an alternative cut of the unhinged B-side ‘Another Place’, has never been previously issued anywhere).

The Seeds was originally released in July 1966, and only reached Number 132 on the Billboard chart, but the record, featuring the late, great, deranged genius Sky Saxon’s unrefined and utterly idiosyncratic yelping vocals and compositions, Jan Savage’s raw, blasting fuzz tone guitar, Rick Andridge’s thrillingly primitive drums and Daryl Hooper’s simmering organ has inspired a host of musicians (The Stooges, Alex Chilton, Suicide, Sex Pistols, The Cramps and The Fall, to name but a few) ever since.

In fact, the DNA of many punk and post-punk bands can be traced back to the grooves of The Seeds’ hypnotic, unsymmetrical, positively wiped out vision of garage rock. Featuring their two seminal 1965 punk anthem singles ‘Can’t Seem To Make You Mine’ and ‘Pushin’ Too Hard’, along with the malevolent ‘Evil Hoodoo’, the ardent ‘Girl I Want You’, the punky ‘You Can’t Be Trusted’ and the truculent ‘Nobody Spoil My Fun’, The Seeds album, featuring all original Saxon songs (many groups still included numerous cover versions on their records during this period), stood head and shoulders above most of the countless American garage bands of the era.

The previously unreleased on vinyl material includes the full length, brilliantly distressed, unedited take of ‘Evil Hoodoo’, the unissued song ‘Dreaming Of Your Love’, an early version of ‘Pushing Too Hard’ and their splendid B-side, ‘Out Of The Question’. The excellent 8-page booklet written by reissue producer Alex Palao diligently dissects the Seeds’ early career in unparalleled detail, established upon new investigation and consultation with the surviving band members. Keyboard player Hooper, one of the originators of the Seeds’ influential sound, has opened his files to share a whole plethora of unbelievable, rarely seen photographs of the ‘distinctively’ dress band. Ace/Big Beat’s expanded and definitive edition of this ageless garage rock masterwork really does The Seeds justice. Essential stuff. 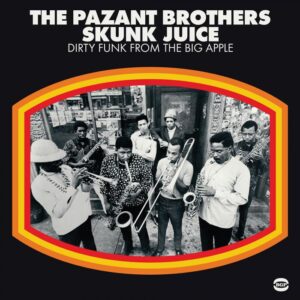 This is another great vinyl release from Ace/BGP. The title of the LP really does spell out the sound that lies within the grooves – quintessential soiled funk from New York.

Though having played with jazz greats Lionel Hampton, Country Joe and The Fish and Kool and the Gang, multi-reed player Edward Pazant and his trumpeter brother Alvin, never really gained the recognition that they were due. Hopefully this fine compilation of their sterling late 60s/early 70s work, recorded for GWP Recordings through RCA, compiled and noted by Dean Rudland, will quickly rectify this oversight.

Highlights of the The Pazant Brothers instrumental horn driven grooves include the highly danceable title track, the wired ‘Chicken Scratch’ (recorded as The Chili Peppers) and their funky covers of the Peggy Lee standard ‘Fever’, Tommy Tucker’s R&B stomper ‘Hi Heel Sneakers’ (The Brothers version of this number has never been issued before this release) and Nat Adderley’s jazz classic ‘Work Song’.

Side two of the disc is bookended with numbers recorded at a notable live concert by The Pazant Brothers outfit at the Manhattan Museum of Modern Art in 1970. These tracks, ‘Why I Sing The Blues’ and ‘We Got More Soul’, feature the dynamic vocals of Betty Barney.

If you have a yen for prime late 60s funk, then Skunk Juice is your fix. 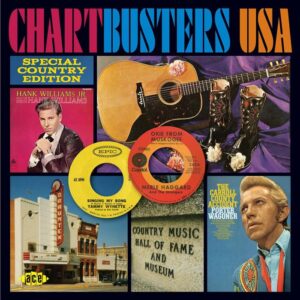 Compiled and noted by Tony Rounce, this is a fundamental collection of great mid-to-late 60s country smash hits that made an impact upon the US Hot 100 chart. Listening to this compilation, it is clear that the 1960s were the second golden age of country music, before the homogenised sounds of the 1980s nearly killed the genre stone dead.

There are so many vital country numbers here; the listener is really spoilt for choice. Personal favourites included are as follows: the late, great George Jones’ 1964 neo-rock ‘n’ roll number ‘The Race Is On’, the last rock ‘n’ roller standing Jerry Lee Lewis’ haunting 1968 country smash ‘What Made Milwaukee Famous (Has Made A Loser Out Of Me)’, Johnny Cash’s darkly humorous take on Dylan’s songwriting ‘Understand Your Man’, Porter Wagoner’s typically bleak morality saga ‘The Carroll County Accident’ and the late, great Merle Haggard & The Strangers’ misunderstood 1969 denunciation of conservative American ideals, ‘Okie From Muskogee’.

Chartbusters USA: Special Country Edition is a great introduction to the very best of country and the perfect compilation for a road trip.

Various Artists: Love’s Been Good To Me – The Songs of Rod McKuen 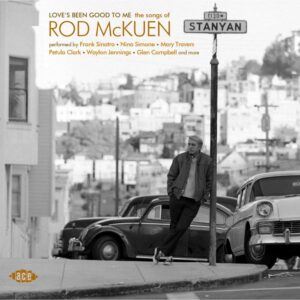 Compiled by Jim Pierson and Mick Patrick, with notes by Barry Alfonso, this is a fitting tribute to the bestselling lyricist, songwriter and poet Rod McKuen, who died at 81 on 29th January 2015. Featuring 25 songs performed by major artists who sang McKuen’s compositions during his heyday in the late 60s until the early 70s, it is hard to understand why so many critics of the period dismissed his incredibly popular poems and lyrics as trite, sentimental and lackadaisical.

The deeply melancholy strain in McKuen’s lyrics is undoubtedly the result of his terrible childhood. He was born in a charity hospital in Oakland, California, on 29th April 1933. His biological father was unknown to him. His mother and abusive alcoholic stepfather raised McKuen. An uncle and aunt also sexually molested him. At just 11 years of age, McKuen left home and spent years performing various jobs – ranging from ranch hand, railway worker, DJ, rodeo cowboy and newspaperman.

By the mid 50s, after a two-year stint in the US Army, McKuen was in San Francisco, writing poetry and reading along with Jack Kerouac and Allen Ginsberg. Having been a contract player at Universal, he lived in Paris, become an intimate associate of Jacques Brel. After a long struggle to survive in New York in the early 60s, McKuen made contact with figures on the folk scene and his great success swiftly followed.

This compilation highlights the sheer diversity of McKuen’s output. Ranging from country numbers (Waylon Jennings ‘Doesn’t Anybody Know My Name’ and Glen Campbell ‘The World I used To Know’) by way of folk (‘I’ll Say Good’ by Jimmie Rodgers’, Barry McGuire ‘One By One’, Glenn Yarbrough ‘I’ve Been To Town’ and ‘Ally Ally Oxen Free’ by The Kingston Trio, French chanson (Jacques Brel ‘Les Amants De Coeur’) and ‘middle of the road’ (Frank Sinatra – who recorded a whole album of McKuen numbers – ‘Lonesome Cities’, Tom Jones ‘Love’s Been Good To Me’, Perry Como ‘I Think Of You’, Petula Clark ‘The Wind Of Change’), McKuen could turn his hand to any genre, while retaining his unmistakable despondent songwriting signature.
Love’s Been Good To Me is the ideal prologue to exploring the timeless, emotive songs of Rod McKuen.

~
Ace Records can be found online at acerecords.co.uk. They’re also on Facebook and they tweet as @AceRecordsLtd.