Here are a few vital recent releases from Ace (all on wonderful vinyl), probably one of the best reissue labels in the known world. 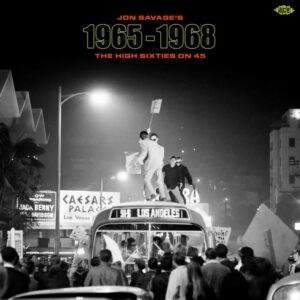 Marking the undeniable resurgence of vinyl, this month Ace is releasing some of the very best albums and singles they have issued in recent years. This double album release, featuring 17 highlights culled from Jon Savage’s four recent double Ace CD 1960’s singles themed compilations that the noted England’s Dreaming author has been compiling for the company during the past four years, is a real solid gold nugget to treasure.

Pressed on fabulous orange vinyl, with highly informative notes by Savage and colourful inner sleeves depicting original record sleeves, vintage advertising and magazines, each side covers the tumultuous Sixties years comprehensively reflected on the following compact discs – 1965 The Year The Sixties Ignited, 1966 The Year The Decade Exploded, 1967 The Year Pop Divided and 1968 The Year The World Burned. This superb collection, like the previous CDs, venerates the compressed power of the 45 RPM 7 inch single, that since the mid-1950s carried the shockwave of vibrant teenage rock ‘n’ roll until the year that closes side 4 of this set, 1968, when the LP usurped its position.

Highlights are numerous within this eclectic set which encompasses a variety of musical genres (soul, funk, garage, Americana, rock) and performers: The Leaves’ snotty garage punk misanthropy evinced on ‘Too Many People’(1965), the live frenzy evoked by James Brown & The Famous Flames on ‘Tell Me That You Love Me’(1966, not sounding dissimilar to 70s No Wave James Chance), the stealthy instrumental soul of Book T & The MG’s ‘Slim Jenkin’s Place’(1967) and the insurrectionist swagger of the MC5 blasting out ‘Kick Out The Jams’ (1968) on a very rare preview pressing of the live cut as a single, which concludes this collection. Other vital cuts include Rex Gavin & The Mighty Cravers’ terrific James Bond-inspired dance work out ‘Sock It To ‘Em J.B. PT 2’, The Spades’ proto grungy punk ‘We Sell Soul’ (featuring the late, great Roky Erickson’s ardent vocals, who would become the prime mover of the 13th Floor Elevators), garage punk pioneers The Seeds’ spooked ‘The Other Place’, the prescient and frantic ‘People! Let’s Freak Out’ by The Freaks Of Nature (an early English project led by the deceased American music business Svengali Kim Fowley), The Third Bardo’s tripped out ‘I’m Five Years Ahead Of My Time’ (often covered live by The Cramps during their Psychedelic Jungle period in the early 1980s) and the great ‘lost’ reflective 1968 Kinks single, ‘Wonderboy’.

Obviously, there are a few tracks that were featured on the CDs that one wishes could have been included on this vinyl set: ‘The Price of Love’ – The Everly Brothers, ‘Happenings Ten Years Time Ago’ – The Yardbirds, ‘So You Say You Lost Your Baby’ – Gene Clark, ‘Tighten Up’ – Archie Bell &The Drells, to name but four personal favourite tracks, in chronological order of release from each the aforementioned 96 track compact discs. Yet the compressed Jon Savage’s 1965-1968 – The High Sixties on 45 really holds together as a spectacular compilation that withstands continual plays on the deck. Savage has produced a real classic, in a class of its own. 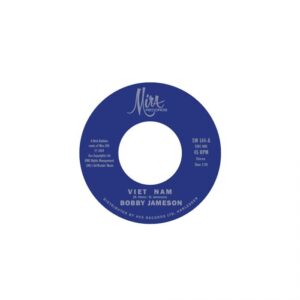 A barnstorming 45 single reissue of a Mira Records disc that vanished without a trace when first released in 1966. Given the ferment anti-Viet Nam war sentiment of lyrics featured on this strident Bo Diddley-style beat stomper, played by various members of the renowned 60s garage punk band The Leaves, which was first issued as the conflict was reaching its zenith, that is hardly surprising.
Propelled by pounding drums (played by Don Conka of Love) and an insistent, driving harmonic riff, ‘Viet Nam’ is a rollicking garage punk rocker that was featured on the soundtrack to the sensational 1967 documentary, Mondo Hollywood. Directed by Robert Carl Cohen, the notorious Mondo Hollywood (sold as being “more than a movie, it’s a trip”), captured the psychedelic high tide of 1960s Los Angeles with portraits of various original hippies (Gypsy Boots, celebrity hairdresser Jay Sebring, who was later killed by the Manson Family) spaced out characters (artist Vito Paulekas, burlesque artist Jennie Lee) and musicians (Frank Zappa), including the 21-year-old singer Bobby Jamerson.

Since 1963, Jamerson was a cult figure on the LA music scene, opening for Jan & Dan and The Beach Boys, before working with Neil Young’s Crazy Horse and Frank Zappa. Despite making a well-received 1965 LP entitled Songs Of Protest and Anti-Protest, using the nom de guerre Chris Lucey, Jamerson, who died in 2015, never really made it in the City Of Angels. This 45 single, mastered from the original 3-track tape and featuring a blistering instrumental version of ‘Viet Nam’ on the flipside, stands as Bobby Jameson’s enduring, rebellious legacy. 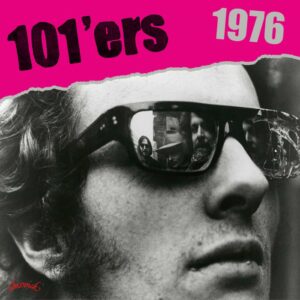 Compiled together for the first time on a 7-inch vinyl Extended Play single, here are the four best tracks that Joe Strummer’s initial band, The 101’ers, recorded for Chiswick Records, which would in time become Ace Records. Mostly produced by Ace’s co-founder Roger Armstrong, these startling tracks offer an incredible glimpse of Strummer at the beginning of his highly influential career as the lead singer/songwriter of The Clash.

As related in the notes on the sleeve of this 1976 EP, written by Strummer’s teenage Sussex friend Peter Silverton, the 101’ers strong brew of pub rock reflected the tastes of the free-spirited inhabitants of the mid-70s squatting scene in west London. The 101’ers loud, tough and heartfelt rock ‘n’ roll anticipated what emerge with the creation of UK punk. Featuring Strummer on guitar and lead vocals, Dan Kelleher on bass, Clive Timperley’s abrasive lead guitar and future Metal Box-era PIL drummer Richard ‘Snakehips’ Dudanski, the 101’ers were obviously a formidable live unit, the power of which Armstrong managed to capture in the reverb-heavy Pathway Studios, Newington Green, North London on 4th and 10th March 1976.

First up is the rollicking ‘Keys To Your Heart’, the only composition with a sole Strummer writing credit and the best song featured here. Such is the momentum of the harmonious yet urgent ‘Keys To Your Heart’, driven by Strummer’s impassioned vocals and the third single originally issued on Chiswick, it would crop up in the set list of Clash gigs four years later.

‘5 Star Rock ‘N’ Roll Petrol’ blends prime Them with unalloyed pub rock, ‘Sweet Revenge’ reveals a love of South American rhythm and music (which Strummer would draw upon at various stages throughout his career), while the tale of big city sleaze on ‘Rabies (From The Dogs Of Love)’ musically blends freak-out guitar with 60’s garage punk.

With a suitably punky pink, black, white and silver coloured sleeve, featuring a shot of Strummer wearing a pair of broken mirror shades in which the rest of the 101’ers are reflected, this 1976 EP is a compulsory purchase for Clash fans.

Barbara Brown – Got To Be Somebody: The XL Sessions – 1960s Memphis Gold 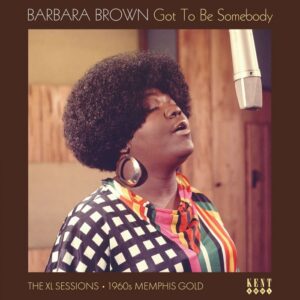 Remarkably, the renowned, late Memphis gospel/soul singer Barbara Brown never released an album during her lifetime. With this exceptional vinyl-only release, compiled and noted by Dean Rudland, Kent/Ace have fashioned what a 1968, 13-track long Barbara Brown LP could have sounded like if it had been issued half a century ago.

Barbara Brown came from a Memphis family, comprising ten girls and two boys. The family sang in church, where it soon became clear that Barbara was a vibrant lead singer. Backed by three of her sisters (Roberta, Betty and Maurice), Barbara & The Browns performed as a group. One of Barbara’s brothers persuaded Chip Moman to record them, leading to three singles issued on Stax in the early 60s. By 1966, the contract was sold on to Gene Lucchesi’s XL label, where Barbara Brown was recorded by his partners Stan Kesler, who oversaw proceedings and provided the band, and produced and arranged by Charles Chalmers, famous for his saxophone playing on many of Aretha Franklin’s most celebrated recordings.

Barbara Brown highpoints showcased here include the emotionally devastating ‘Can’t Find No Happiness’ and ‘If I Can’t Run To You I’ll Crawl’, the indignant ‘I’m Gonna Start A War’, an ardent version of ‘Things Have Gone To Pieces’, which was a big hit on the country chart for George Jones, and a soaring rendition of Willie Cobb’s R&B standard ‘You Don’t Love Me’.

That the tracks included here, released as singles on various labels (Cadet, Atco, Tower and belatedly on MGM Sound of Memphis) were not gigantic hits beggar’s belief. It is highly probable that celebrated lifetime Memphis resident and huge gospel music devotee, Elvis Presley, would have repeatedly played Barbara Brown’s singles at full volume within the inner sanctum of the Jungle Room in his Graceland’s mansion. After all, these waxings are pure Memphis gold. 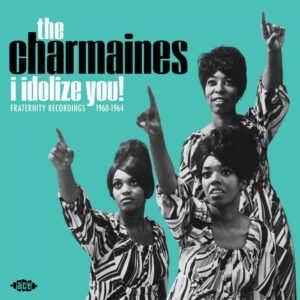 Compiled and noted by Mick Patrick, this fantastic 14-track vinyl only release compiles the best cuts that this remarkable Cincinnati girl group trio recorded for Harry Carlson’s independent Fraternity label, formed in 1954, during the early 1960s. Throughout The Charmaines career, which lasted into the early 70s and covered six record labels, the group never released an album. Mick Patrick’s I Idolize You! Fraternity Recordings 1960-1964 LP resolves this highly inappropriate situation.

Formed by Marian ‘Gigi’ Jackson, Dee Watkins and Irene Vinegar, The Charmaines were stars on the Cincinnati club circuit. They won a talent show in 1960, with the prize being a recording contract with Carlson’s Fraternity. The trio would also feature on the recordings of James Brown, Gary U.S. Bonds and Little Willie John, and while in Canada they would often support the Dave Clark Five and The Rolling Stones on their early tours of the country. This compilation features such Charmaines highpoints as their 1962 hit ‘On The Wagon’, both the original 1963 version and the 1966 superior, faster rendition of the yearning ‘G.I. Joe’, the rock ‘n’ roll dancer ‘Rockin’ Old Man’, their collaboration with their producer Carl Edmondson on an outstanding run-through ‘Big’ Joe Williams’ blues standard ‘Baby Please Don’t Go’ and their bravura cover version of Ike and Tina Turner’s ‘I Idolize You’.

The late, renowned guitar hero and Fraternity’s big star Lonnie Mack (1941-2016) is also featured on this release, providing dynamic backing for the group during their vigorous 1964 renovation of Huey Smith and The Clowns’ 1957 Ace New Orleans standard, ‘Rocking Pneumonia And The Boogie Woogie Flu’. In turn, The Charmaines work as backing singers for is highlighted on the guitarist’s wild versions of Berry Gordy’s ‘Money (That’s What I Want)’ and East Coast bluesman Titus Turner’s ‘Sticks And Stones’.

I Idolize You! Fraternity Recordings 1960-1964 provides the evidence that The Charmaines were easily the equal of the more commercially successful girl groups of the era. The Charmaines’ recordings have endured in popularity on the UK northern soul scene and this album outlines why that is the case, decades after they were recorded. Play loud and often.