Here, in a special summer all-singing, all-dancing vinyl only Recent Ace Records Releases overview, are a few fundamental record pressings from Ace, probably one of the best reissue labels in the world. 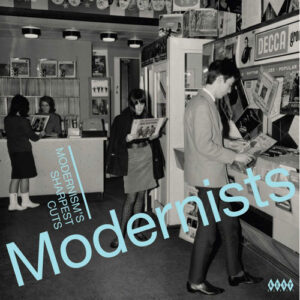 Compiled by Ady Croasdell and Dean Rudland, who also assembled the excellent Modernists: A Decade of Rhythm & Soul Dedication and Modernism CD compilations, this vinyl only distillation of these two discs (with a few rare selections from other sources) provides the quintessential soul and rhythm & blues soundtrack for a mod-minded individual from any era. Croasdell and Rudland, who previously compiled the highly successful and influential Ace Mod Jazz discs, have turned their attention to 14 rare but hot tracks that would have definitely excited the first wave of UK Modernists in the late 1950s and early 1960s, if they had been able to hear them.

Modernists: Modernism’s Sharpest Cuts, the album, is a scorching selection of black 60s American music that for one reason or another never achieved hit single status, but nonetheless, rocks the house to this day. Some tracks never reached England at the time or were not issued at all: these include Floyd White’s terrific ‘Another Child Lost’, and The Merced Blue Notes’ inspirational ‘Sundown’.

If you are looking for superb rhythm ‘n’ soul dancefloor fillers, with a distinct mod sensibility, Modernists: Modernism’s Sharpest Cuts delivers the goods. The fantastic 60s vintage photographs of bright young Modernists shopping in a record store only adds to the general allure of this release.

Gil-Scott Heron – The Revolution Will Not Be Televised 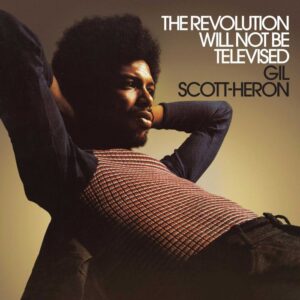 The late, great Gil-Scott Heron (1949-2011) was one of the most incisive, sophisticated, intelligent and passionate commentators upon the Afro-American experience of the late 20th century. The singer/poet produced some of the most vital sounds ever created in black US music. Heron’s songs and words encompassed the personal and the political, not in a crude, didactic fashion, but as truly poetic and witty satirical observations upon the numerous indignities, inequality, oppression, blind prejudice and naked violence that he and millions of other African Americans had to endure.

This superb compilation album, originally issued towards the end of 1974, comprises 11 key tracks from the three albums Gil Scott-Heron (together with his musician partner, Brian Jackson) recorded for Bob Thiele’s Flying Dutchman label. Based upon the original master tapes, these timeless compositions and poems sound better than ever and just as relevant now, nearly 45 years on.

Heron first came into view in 1970 as the young author of a novel, The Vulture, and of poetry entitled Small Talk at 125th and Lenox. Through a publishing contact, he got in touch with Bob Thiele, the visionary former head of the jazz label Impulse, which had recorded many of the great John Coltrane albums that Heron admired. Thiele wanted to issue Heron on record but at the time could only afford a spoken word album. The result was the 1970 LP Small Talk at 125th and Lenox (named after his book of poems) and recorded with just Heron and three percussionists. Channelling the urgency of proto-rap collective The Last Poets (but with less machismo and more humour), Heron’s Small Talk at 125th and Lenox album (recorded live in a small studio in front of an audience) transmits his informed communiqués to black America: the critique of the American government’s spending upon space exploration while millions of blacks languished in poverty (‘Whitey On The Moon’), ‘No Knock’ (the law which enabled the police to enter homes without warning) and ’Brother’ (a comment upon the insensitivity of those in the ghetto towards their neighbours).

Heron’s Small Talk at 125th and Lenox sold enough copies for Thiele to commission a 1971 studio LP, Pieces Of A Man. Featuring the renowned bassist Ron Carter, Brian Jackson on piano and Pretty Purdie on drums, together with Hubert Laws on flute/sax and Burt Jones on electric guitar, Pieces Of A Man is a solid gold jazz/soul masterpiece which cemented Heron’s reputation. The compositions on Pieces Of A Man would feature in Heron’s set for the rest of his life – the celebration of ‘Lady Day And John Coltrane’ and the redemptive power of music in general, the harrowing depiction of junkie life ‘Home Is Where The Hatred Is’, the hopeful ‘Save The Children’, the amusing, propulsive and sardonic classic ‘The Revolution Will Not Be Televised’ (“The Revolution will not be brought to you by Xerox in four parts without commercial interruptions”), and the moving title track which delineates how a man’s life can disintegrate by losing his job, are all featured here.

Together with cuts from Heron’s fine 1972 Free Will album (the despairing ‘The Get Out Of The Ghetto Blues’ and the traumatic yet beautiful ‘Did You Hear What They Said?’), The Revolution Will Not Be Televised provides the perfect introduction to the great poet/singer’s abiding early work. This is music for the ages. 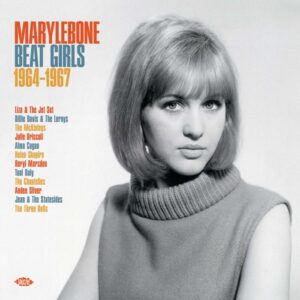 With The Beatles having opened the doors for creative expression, numerous girl groups, bands and female rock ‘n’ rollers took the opportunity to kick against the reactionary perceptions and practices of the music business establishment. Marylebone Beat Girls 1964-1967 presents the evidence.

Highlights include Julie Driscoll’s sultry ‘Don’t Do It No More’, The Chantelles’ (previously a 50s girl group, who had exchanged their petticoats for a Modernist look) perfect girl pop ‘I Want That Boy’, Jean & The Statesides’ faithful cover of Jan Bradley’s version of the 1963 Curtis Mayfield penned song ‘Mama Didn’t Lie’, Beryl Marsden’s infectious version of the Stevie Wonder co-write ‘Music Talk’ and Liza & The Jet Set’s exultant ‘Dancing Yet’ (“But the moment you stepped in the room, my feet said go man, go!”).

Marylebone Beat Girls provides ample proof that British pop in the 1960s was the equal of anything produced in the United States. There are 25 tracks on the CD version of this album, it is the LP, with its cool black and white portrait photograph of Judy Driscoll, mandarin coloured vinyl and information packed colourful inner bag, for which you will hanker. 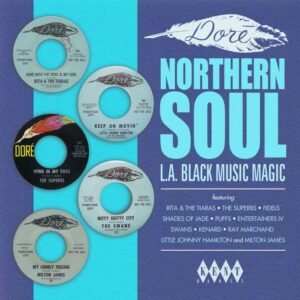 Compiled and noted by Ady Croasdell, this LP is a treasure trove which shines a spotlight on 14 dance tracks, mostly of 1960s vintage, issued by the small Hollywood record label Dore, which ignited the Northern Soul scene in the UK. As Croasdell notes, it has taken decades for Dore to divulge the full extent of its Northern Soul material, but the wait has certainly been worth it.

The first track on Side Two, The Entertainers IV’s uplifting ‘Getting’ Back Into Circulation’, which features the same backing as The Whispers’ original version of ‘Doctor Love’, was the initial number that got UK soul fans excited by the Dore catalogue. The second was Kenard Gardner’s jubilant’ Do The Skin’. However, it was Rita & The Tiras’ unstoppable ‘Gone With The Wind Is My Love’ that really hit home. Originally released in 1967, ‘Gone With The Wind Is My Love’ didn’t sell extensively, but in the late 70s it took the Wigan Casino by storm. It’s easy to see why; lamenting vocals backed by an inexorable rhythm and dynamic production makes ‘Gone With The Wind Is My Love’ a definitive Northern Soul record. Together with the pert dancer ‘I’m Givin’ You Notice Baby’ by The Fidels (responsible for the early 70s classic ‘Try A Little Harder’), the appositely named Superbs’ frantic dancer ‘I Wanna Do It With You Baby’ and their funky early 70s number ‘Wind In My Sails’, Little Johnny Hamilton & The Creators’ vibrant ‘Oh How I Love You’ (many of The Creators went on to form War), Milton James’ brooding ‘My Lonely Feeling’ and the strolling cool of Ray Marchand’s ‘Your Ship Of Fools’ make this Dore collection a compulsory purchase.

If you are looking for prime Northern Soul on vinyl, at a very reasonable price, this is it. Dore Northern Soul – L.A. Black Music Magic lives up to its title and is dancefloor filler.

Various Artists – The Stars Of Modern

Compiled by Ady Croasdell, this is the fifth release in Ace/ Kent’s fine limited edition 7-inch vinyl EP series, “The Stars Of …”. Here the performers are drawn from the catalogue of the legendary company and label formed by the Bihari brothers in Los Angeles during 1945, Modern.

The four tracks featured on the EP all date from the mid to late 1960s and were all recorded at Modern’s base at 5810 South Normandie Avenue. Jackie Day’s dynamic 1966 soul dancer ‘Before It’s Too Late’ kicks off the disc in high style. Day, who wrote ‘Before It’s Too Late’, warns her errant boyfriend in the song to think before leaving, but with such seemly effortless style and rhythm that the track ignites the dancefloor. Recorded the same year, Vernon Garrett’s remorse filled ‘If I Could Turn Back The Hands Of Time’ is equally vibrant and propulsive. The rhymic mimicking of the second hand of the clock only makes the track more insistent.

The late, great Mary Love, who died in 2013, kicks off Side 2 of the EP. A longstanding favourite of UK Mods, Northern Soul aficionados, gospel fans and those who search for rare grooves, Love delivers a passionate, and highly danceable, rendition of Frank Wilson’s song, which was previously only available as a US import. Johnny Gilliam’s incredible 1968 stately soul ballad, ‘You Make Me Feel Like Someone’, is an appropriate closer for The Stars Of Modern EP.

Ace is to be commended for keeping the vital 45-RPM extended play format alive and kicking. The Stars Of Modern is the perfect soundtrack to an ideal weekend.

Ace Records can be found online at acerecords.co.uk. They’re also on Facebook and they tweet as @AceRecordsLtd.