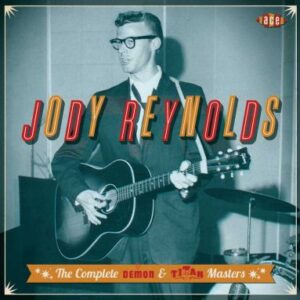 Jody Reynolds is undeniably one of the unsung heroes of rock ‘n’ roll. In 1958, Reynolds had a huge hit around the world with his composition, ‘Endless Sleep’, which was recorded at the renowned Gold Star LA recording studio with Lee Hazlewood’s guitarist, Al Casey, laying down the main riff. Inspired by Presley’s eerie ‘Heartbreak Hotel’, Reynolds’ mean and moody sounding tale of a young lover looking for his girlfriend who, in the aftermath of a quarrel, has thrown herself into the ocean, broke new ground for the pop / rock ‘n’ roll single.

Obviously, suicide as subject matter had been present in many country & western and blues tunes, but not in popular music. Despite the fact that Reynolds, on the advice of the Demon label who issued the 45, changed the number to reunite the lovers at the close, caused much controversy – despite reaching number 5 in the US charts.

Unfortunately, Reynolds never enjoyed such success again. His magnificent follow-up single was the smouldering ‘Fire Of Love’. ‘Fire of Love’, brilliantly covered by The Gun Club on their classic 1982 LP, Miami, inexplicably only reached 66 on the Billboard chart. The B-side of ‘Fire Of Love’, ‘Daisy Mae’, showed that Reynolds could rock with the best of them, but went ignored by most of the record buying public.

Compiled, archived and noted by Alex Palao, this superb compilation draws all the tracks Reynolds recorded for Demon and Titan. From wild instrumentals such as ‘Makin’ Out’ (recorded as The Storms in 1961), to the swinging celebration of figure hugging slacks ‘Tight Capris’ (the B-side of ‘Endless Sleep’), the twanging, heartbroken ‘Stone Cold’ and its spooked 1960 flipside ‘(The Girl With The) Raven Hair’ to the flat out rock ‘n’ roll of ‘Beulah Lee’, Reynolds was obviously a master of country despair and incendiary rockabilly. The CD closes with two wonderful and singular duets with legendary female country singer Bobby Gentry, recorded for Titan. The 1966 existential ‘Stranger In The Mirror’ and the mournful ‘Requiem For Love’, hint at Bobby Gentry’s forthcoming huge, haunting breakthrough hit, ‘Ode To Billie Joe’, a year later.

Jody Reynolds, who died in 2008, was no mere one hit wonder; he was definitely the real deal. Pester Ace until they eventually issue this incredible compilation on vinyl.

Hank Ballard & The Midnighters – Unwind Yourself: The King Recordings 1964-1967

Compiled and noted by Tony Rounce, this fantastic compilation covers a rich but often overlooked period in the career of John Henry Kendrick, better known as Hank Ballard. Ballard had been enjoying hits with The Midnighters, at that time called the Royals, back in 1953, but by early 1964 he and the band were reaching a crossroads in their music. Soul was starting to supersede R&B and James Brown, Ballard’s label mate on King and future collaborator, was on the cusp of igniting a new musical direction – funk.

Highlights on Unwind Yourself are numerous. 1967’s ‘Dance Till It Hurtcha’ is proto-funk of the first order, while ‘Unwind Yourself’, released the same year, should have received the same attention as James Brown’s epochal number ‘Cold Sweat’. The CDs closing track, ‘Funky Soul Train’, bares a James Brown co-writing credit and is worth the price of admission alone. A dazzling 1965 rendition of ‘One Monkey Don’t Stop No Show’, coupled with the foot stomping ‘Do It Zulu Style’, the bluesy ‘Somebody’s Got To Help Me’, the influential R&B strut of ‘Poppin’ The Whip’ (14 weeks after it was recorded, James Brown cut the similar but infinitely more successful ‘Papa’s Got A Brand New Bag’), the sorrowful soul of ‘He Came Along’ and the previously unreleased dancefloor filler ‘Get That Hump In Your Back’, all contribute to making Unwind Yourself an essential purchase.

As these tracks prove, most of which have not been reissued before, Hank Ballard & The Midnighters held their own and moved with the times. This is all classic stuff from one sharp dressed dude – Mr. Hank Ballard. 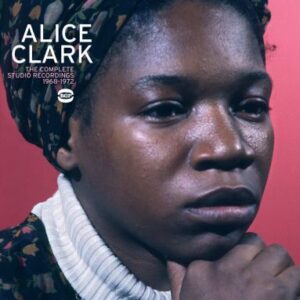 BGP/Ace’s highly commendable record re-release programme continues with this fine white vinyl issue of the complete recordings of an often overlooked but great soul singer – Alice Clark. Compiled and extensively noted on the inner bag by Dean Rudland, this terrific album showcases the immense talents of a performer, born in the late 1940s in Bedford-Stuyvesant, Brooklyn, who should have definitely received far more support from the music industry and recognition from the public at large.

From her debut 1968 deeply soulful Rainy Day Records single, ‘Say You’ll Never (Never Leave Me)’ to her eponymous 1972 album, recorded for Bob Shad’s Mainstream Records, these splendid 15 tracks are all that remains of Clark’s career. Yet they carry such an emotional impact that her reputation continues to grow. One of the every best tracks here is Clark’s astonishing single for Warner Bros-Seven Arts Records, ‘You Hit Me (Right Where It Hurt Me)’. This 45, Rudland relates, was, and remains, a big hit on the Northern Soul scene; a ‘dancer’ that carries a feeling of jubilation despite the heartbreak depicted in the lyrics. The equally strong tracks from Clark’s album, ‘Never Did I Stop Loving You’ and ‘Don’t You Care’ were equally important numbers when DJs revived them on the acid jazz and contemporary soul scene during the 1990s.

The funky/jazzy jam that is ‘Hard Hard Promises’, Clark’s masterful reading of Jimmy Webb’s ‘I Keep It Hid’ and the dramatic ‘It Takes Too Long To Learn To Live Alone’ are among the other numerous highlights featured here. Alice Clark died in 2004, but her indomitable spirit, evinced within these cuts, lives on. Make sure you catch it.

The Wild Oats – The Oak EP Plus 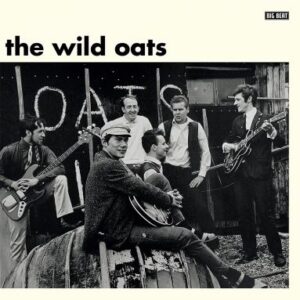 A scarce as hen’s teeth British 1964 beat group EP is now reissued by Ace imprint Big Beat, on a fab gear 10 inch vinyl album, with five extra tracks from the legendary sessions. Since the 1970s the original Oak Ep, of which there was only a hundred copies pressed, has commanded between £500 and £1,000 from UK beat music collectors. This reissue, with band pictures printed on the inner bag, is a far more affordable proposition.

Compiler Ady Croasdell relates how in 1963 aspiring record producer David Nicolson placed an advertisement in the NME for a new band to work with for a session. Five piece Beat band from Leiston, Suffolk, The Wild Oats, were the first to respond and got the gig, recording four classic R&B standards at R.G. Jones studios in Morden, south London. On 12th April 1964. Side one of this album is the original Wild Oak EP. The Wild Oaks’ spirited renditions of Bo Diddley’s ‘You Can’t Judge A Book By It’s Cover’, Rufus Thomas’ ‘Walking The Dog’ and The Shirelles’ ‘Will You Love Me Tomorrow’ are an incredible time capsule example of the quintessentially British approach to adapting African American music into a different, English music during the early 1960s. The band’s remake/remodel of Elvis Presley’s ‘Put The Blame On Me’, with Wild Oat Carl Harrison taking the lead vocal, was the last track on the EP and is just as evocative of the period.

The remaining five tracks, recorded four months later at RG Jones and at Tony Pike’s Studio in Putney during 1965, retain the joyous mood of English Beat rock ‘n’ roll. This record is an amazing snapshot of the optimistic mood and music of post war Britain in the early 1960s.

Lonnie Mack – The Wham Of That Memphis Man! 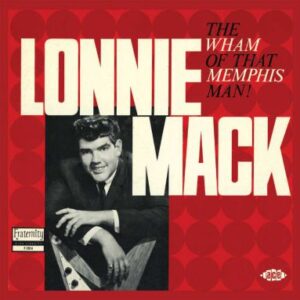 This new reissue of the legendary Flying V guitarist’s remarkable October 1963 album is unfortunately very timely. Though its release was long planned, it will serve as a fitting epitaph to the great guitar player, who died on 21st April 2016, aged 74. Mack’s innovative and influential ability to blend country-style rock ‘n’ roll’ with black gospel and blues makes The Wham Of That Memphis Man!, originally released on the Cincinnati Fraternity label, an enduring classic.

The opening track ‘Wham!’ more than lives up to its title. One hell for leather roller coaster ride of blasting instrumental rock ‘n’ roll, ‘Wham!’ gives Link Wray a run for his money – and surely there can be no higher praise than that. The next track abruptly changes mood. Mack’s remarkable vocal takes his version of ‘Where There’s A Will’ into blue-eyed gospel territory, aided and abetted by the joyful strains of the Cincinnati girl group The Charmaines, who are featured throughout the album. Instrumental ‘The Bounce’ does exactly that, ‘I’ll Keep You Happy’ takes things down to Soulsville, while Mack’s version of Chuck Berry’s ‘Memphis, Tennessee’ jumps in a way that even its author couldn’t perceive.

Mack’s reading of Jimmy Reed’s ‘Baby, What’s Wrong With You’ is two-fisted roadhouse bar-blues of the first order. The guitar players own composition, ‘Down And Out’, is tough blues par excellence, while his rocking cover of Dale Hawkins’ immortal ‘Susie-Q’ is unquestionably a candidate for the best remake of the number yet recorded.

If you haven’t heard The Wham Of That Memphis Man! before, you are certainly in for a treat. Incredibly, this album only reach Number 103 on the US charts back in ’63. Maybe, just maybe, if enough of you buy it now, that indignity will be rectified. Well, we live in hope.

~
Ace Records can be found online at acerecords.co.uk, as well as on Facebook and twitter, as @AceRecordsLtd.