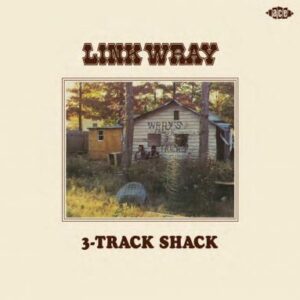 Many radio stations refused to play ‘Rumble’. The few DJ’s who did play the track, such as Dick Clark, refused to even mention the title – “Here is a slow instrumental from Link Wray…” Against all odds, the record broke through. ‘Rumble’ by Link Wray and his Ray Men (sometimes billed Wraymen or Raymen), a highly ‘uncommercial’ instrumental tune on the small independent Cadence records, receiving little airplay or support, was predictably a huge hit. A Capitol Records company rep had previously described a tape of ‘Rumble’ as a “death dirge” (accurate and a good alternative title, but he wasn’t being complimentary), while a Decca Records man offered the more esoteric assessment that the track sounded like “spaghetti strings.” ‘Rumble’ is so utterly simple that it manages to incorporate a descending Blues scale that would be included during the first lesson on the guitar and could be played by almost anyone. Yet consummate stylist Wray’s thrash execution and initial conception is everything.

Wray did produce some classic instrumentals on major label Epic, the ultra cool ‘Slinky’ (the title says it all), the stomping ‘Comanche’ and ‘Guitar Cha-Cha’. But the label unwisely tried to shape his ornery creative drive by forcing him to imitate Duane Eddy’s infinitely more conventional sound. After Link’s shot at his own label failed (Rumble Records – what else?), Swan Records of Philadelphia gave Link Wray And His Raymen their artistic freedom, resulting in his third big smash in 1963, the devastating ‘Jack The Ripper.’ A slew of incredible singles followed: ‘Turnpike U.S.A’, ‘Run Chicken Run’, ‘The Shadow Knows’ (Link’s tribute to Orson Welles’ radio show with its spoken intro: “Who knows what evil lurks in the hearts of men? The Shadow knows…”), ‘Branded’ and ‘Ace Of Spades’, to name but a few.

Link Wray rarely sang. This was due to the fact that he had contracted TB while serving with the US Army during the Korean War in the early 50’s, leading to the removal of one of his lungs. Yet he did possess a fabulously ripped apart Rock ‘n’ Roll voice.

By the end of the Sixties, Link Wray stopped performing live for a period because he “didn’t want to be playing to a bunch of acid heads.” Link’s silence was broken in the early 70s with three remarkable albums – Link Wray (1971), Mordicai Jones (1972) and Beans And Fatback (1973) – compiled on this Ace CD, mastered, for the first time, from the original tapes.

The albums were recorded on a three-track recording studio built in an old chicken house on the Accokeek, Maryland farmhouse property belonging to Link’s elder brother, Veron. A producer named Steve Verroca had witnessed Link Wray playing in a local bar and was convinced that Wray should now return to the centre stage.

The albums that ensued, Link Wray, Mordicai Jones (both originally issued by Polydor) and Beans And Fatback (Virgin), were markedly different from Wray’s previous material. Some thought Link was exorcising his inner hippie, but the down-home, gritty blues, country, rock ‘n’ roll and gospel songs, either written by the guitarist or by Verroca, really reflected the harsh blue collar family background of the Wray brothers (Doug Wray is featured on drums). In fact, an argument could be made that Wray helped kick start the Americana movement with his use of earthy sounding acoustic guitars, dobros, mandolins, foot stomping percussion and rickety pianos on these uninhibited recordings.

The songs on follow up Mordicai Jones are solid but unfortunately, probably due to weak sales of the eponymous first album, Gene Johnson (under the nom de guerre ‘Mordicai Jones’) replaces Wray as lead vocalist. Johnson’s voice is strong and predictable, but totally lacks the character and raged glory of Link Wray’s vocal delivery.

Arguably, perhaps the best album of the trio of recordings is the one that Link disliked the most – Beans And Fatback. Probably outtakes from the Link Wray sessions that producer Verroca sold to Virgin, Beans And Fatback thankfully features Wray on vocals again and packs one hell of a punch.

Wray’s intoxicating 6 minute version of the traditional number ‘I’m So Glad, I’m So Proud’ does nothing less than anticipate the Sex Pistols with its brutal, propulsive but melodic riff (could Steve Jones have possibly heard this?). Link’s lead guitar and vocals are eviscerating and the track is an unstoppable juggernaut – also included is the single edit. ‘Shawnee Tribe’ is roots music par excellence, ‘Hobo Man’ and ‘In The Pines’ could be lost tracks from the Stones’ Exile On Main Street, and the album ends with an impassioned plea for redemption – ‘Take My Hand (Precious Lord)’.

3-Track Shack contains incredible stuff from the backwoods of the career of one of the all-time greats of music – Link Wray.

3-Track Shack by Link Wray can be bought on CD from Ace Records website.

Various Artists – All Aboard! 25 Train Tracks Calling At All Musical Stations 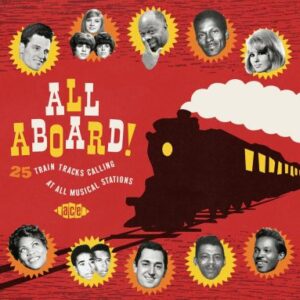 Expertly compiled and noted by Vicki Fox, here is an example of the type of CD at which Ace excels – the theme disc. As the title spells out, the theme of this amazing compilation is songs about trains, from a myriad of musical genres.
The earliest recorded track on the disc is yodelling Cliff Carlisle’s 1937 country blues number and closes with some mental 2012 garage rock action from Daddy Long Legs, ‘Death Train Blues’. In-between, are some outstanding soul, rockabilly, ska and gospel numbers.
Highlights include Harold Jackson & The Jackson Brothers’ 1961 soulful rejection of segregated travel, ‘Freedom Train’, Rufus Thomas’ mighty funky 1968 dancer ‘The Memphis Train’, Johnny Cash emulator Bobby Wayne’s rockin’ 1963 song ‘Big Train’, the 1967 ska-tastic ‘Train To Skaville by The Ethiopians and The Shangri-Las’ 1965 Shadow Morton produced teen melodrama, ‘The Train From Kansas City’.

All Aboard! 25 Train Tracks Calling At All Musical Stations is an invaluable collection for any journey.

All Aboard! Train Tracks Calling At All Musical Stations can be bought on CD from Ace Records website.

A very welcome CD reissue of a long deleted 1975 Isaac Hayes album, the only one he released in the name of his celebrated backing band – The Movement. Focusing upon the great musicians who helped him achieve unparalleled success, Hayes produced one of the best albums of his illustrious career.
The title track, a big UK hit in April 1976, dominates the LP. A fast, urgent dance track, ‘Disco Connection’ is a prime Isaac Hayes instrumental that could have been the soundtrack for some cool, lost blaxploitation picture. That could also be said for the rest of the tracks on the album.

The hypnotic ‘Disco Shuffle’ and the funky ‘Choppers’ continues Hayes’ disco muse but much of the remaining instrumentals envelop the listener like soundtracks for imaginary movies. The jazzy and wistful ‘St. Thomas Square’ is the perfect closing credit score, ‘The First Day Of Forever’ carries a celebratory, upbeat tone, while the graceful ‘Vykkii’ could have been on Hayes’ Oscar winning Shaft score. Hayes Movement veterans, such as guitarists Skip Pitts and Michael Toles, drummer Willie Hall and keyboardist Lester Snell, shine brightly throughout the whole of Disco Connection.

Hopefully, Ace will issue Disco Connection on vinyl in the near future.

Disco Connection can be bought on CD from Ace Records website here.

P-Funk All-Stars – Live At The Beverly Theatre In Hollywood. 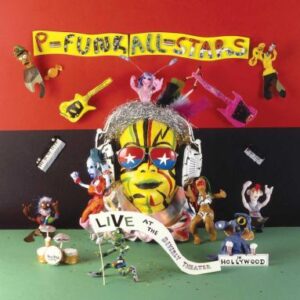 Here is a particularly hot live date by George Clinton’s P-Funk All-Star organisation, captured on tape one night in 1983 in Hollyweird. First issued by Ace in 1990, this deleted, wild affair is now thankfully back in the catalogue.

Blending the best of Funkadelic, Parliament and his own solo career to that date, the crazed visionary George Clinton created a mighty group to showcase his timeless and ever funky music. The musicians featured here include the Funkadelic gifted keyboardist Bernie Worrell, late, great guitarists Garry Shider and the magnificent Eddie Hazel, Sugar Hill label drummer Dennis Chambers and the legendary former James Brown saxophonist Maceo Parker as M.C.

The electrifying live show, which covers two CDs, is a blast from start to mind-bending climax. Of particular note are the free and uninhibited renditions of the Funkadelic classics ‘Cosmic Slop’, the epic guitar freak-out ‘Maggot Brain’ (featuring Eddie Hazel, in one of the best recordings of this astonishing composition), the anthemic ‘One Nation Under A Groove’ and ‘(Not Just) Knee Deep’. The 70s Parliament masterworks ‘Flashlight’, ‘Give Up The Funk (Tear The Roof Of The Sucker)’ and the irrepressible ‘Do That Stuff’ also receive the same quality of funky All-Star treatment.

Yet another essential George Clinton recording that delivers the unforgettable sensation of attending a Parliament/Funkadelic gig. Funk and high weirdness to the max can be found right here.

Buy Live At The Beverly Theater In Hollywood from Ace Records website.

The latest of Ace’s Year By Year examinations of what was released on the London label, the UK’s most eminent resource for US rock ‘n’ roll, pop and R&B, during the Golden Age of popular music is well up to the usual high standard. The year in question for this CD, noted and compiled by Tony Rounce, is 1966 – obviously a vintage 12 months for American music.

By 1966 the London label was not the only UK label releasing US music, and American audiences were now increasingly interested in UK music (thanks to The Beatles and the British bands that followed in their wake), but the label’s combination of American smash hits and more esoteric faire made their releases stand out.

The musical riches London issued, contained on 1966, are both eclectic and abundant. To tease record collectors throughout the land, the sleeve of The London American Label Year By Year -1966 features a picture of the 45 London release of Darrell Banks’ moving soul classic, ‘Open The Door To Your Heart’. For over 40 years it was believed that the track only reached demo stage for London, as it was repeatedly issued in the US on EMI’s Stateside label. However, a finished London copy was recently discovered and eventually sold for over £15,000 – the most expensive UK pressed single in any genre of music.

Other gems include Gene Vincent’s classic garage punk anthem ‘Bird-Doggin’’, a bold, urgent recording that should have pushed the aging rock ‘n’ roll forefather back into the limelight but tragically failed to do so. The Strangeloves, of ‘I Want Candy’ fame, revive Johnny Otis’ ‘Hand Jive’, The Ronettes underrated ‘I Can Hear Music’ (not produced by Phil Spector but co-writer Jeff Barry), the Bobby Fuller Four’s follow up to ‘I Fought The Law’, another Buddy holly number ‘Love’s Made A Fool Of You’, and the timeless Ike & Tina Turner epic, ‘River Deep – Mountain High’.

The London American Label Year By Year – 1966 can be bought on CD from Ace Records website.

Ace Records can be found online here: acerecords.co.uk as well as on Facebook and twitter, as @AceRecordsLtd.