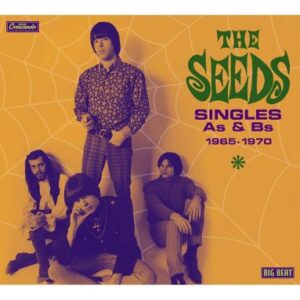 The Seeds, led by the gifted but unhinged vocalist Sky Saxon, were arguably the definitive late 60s American garage punk band, who would influence a host of groups that followed in their wake, from The Doors and The Stooges through to The Cramps and The Fall. Big Beat/Ace over the last few years have issued superb, lavish special edition CD reissues of the four classic albums recorded for the Crescendo label by The Seeds.

Once again expertly compiled, researched and extensively noted by Alec Palao, this outstanding CD collects all the group’s singles. Including their last ditch releases on MGM.

Singles As & Bs is pretty much the perfect introduction to The Seeds, which obviously features their timeless, strident, organ and guitar driven 1965 garage punk anthems ‘Can’t Seem To Make You Mine’ (brilliantly covered by the Alex Chilton on the B-side of his 1978 single, ‘Bangkok’) and ‘Pushin’ Too Hard’. Yet the B-sides also highlight the band’s strengths and roots: the original B-side of ‘Can’t Seem To Make You Mine’, ‘Daisy Mae’, openly proclaims Saxon’s adoration of Buddy Holly, ‘Out Of The Question’ should have been covered by the early Sex Pistols, while ‘Try To Understand’ flipside ‘The Other Place’ features a slinky sax solo by Jimmie Maddin that points a crocked finger back to The Seeds’ rock ‘n’ roll heredity. Even the maligned late MGM singles, recorded when the original group had spilt, carry an electrical charge, in particular ‘Bad Part Of Town’ (1970) and ‘violent Love In A Summer Basket’ B-side, ‘Did He Die’.

One can only hope that Big Beat/Ace will reissue some more classic Seeds singles on vinyl in the near future. 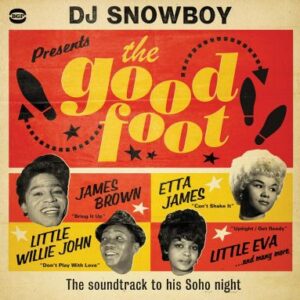 Looking for the ultimate party album? Well, here it is, and it’s also available on glorious vinyl. This is the magnificent soundtrack to Mark ‘Snowboy’ Cotgrave’s Friday club night at Madame Jo Jo’s in Soho – The Good Foot. As the club name suggests, the sounds that rock Snowboy’s crowd’s boat are hot 60s soul and R&B, with a dash of funk and mod jazz thrown into the mix. The result is highly combustible musical excellence guaranteed to move the feet of the dead.

From the gate, Snowboy brings the dancefloor action with Little Eva Harris’ ecstatic 1967-medley rendition of two classic songs –‘Get Ready/Uptight’. The musical excitement just doesn’t let up from this point on: the boisterous 1965 flipside from Ike Turner’s The Ikettes, ‘Don’t Feel Sorry For Me’, the late, great Etta James’ 1964 orchestral dancefloor filler ‘Can’t Shake It’, the propulsive 1963 number ‘Misery’ by The Dynamics and the dramatic 1968 James Brown production by his protégés The Brownettes, ‘Baby, Don’t You Know’. James Brown also appears in his own right with the revolutionary 1967 single ‘Bring It Up’, while the legendary Little Willie John is amply represented with the infectious 1963 number ‘Don’t Play With Love’.

Snowboy commendably shows the musical diversity of his club with the inclusion of the Latin dance sounds of percussionist Mongo Santamaria’s ‘Sweet ‘Tater Pie’ and saxophonist Willis Jackson’s epic jazz groove ‘Nuther’n Like Thunder’, which features more than a nod to Nat Adderley’s ‘Jive Samba’.

Boris Johnson might be doing his best to destroy Soho, but the defiant Snowboy is obviously helping to keep the underground Dionysian spirit of the area alive and kicking. Viva Snowboy! 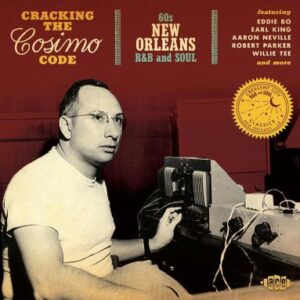 Together with Fats Domino’s brilliant producer and songwriter Dave Bartholomew, Cosimo Matassa fashioned the New Orleans R&B/rock ‘n’ roll sound throughout the 1950s. Matassa would still be at the forefront of the New Orleans sounds as younger producers, such as Allen Toussaint, Harold Battiste and Eddie Bo, took the rhythms of the streets of the Crescent City into a more soulful and funky direction.

The tracks selected on Cracking The Cosimo Code all reflect Matassa’s intuitive sense of rhythm and invention: the unstoppable groove of Jessie Hill’s 1960 hit, produced by Toussaint, ‘Ooh Poo Pah Doo’, Robert Parker’s 1966 dancefloor filler ‘Barefootin’’, Dave Bartholomew’s 1964 reworking of his hypnotic and witty 1957 hit ‘The Monkey Speaks His Mind, Lee Dorsey’s mesmerizing 1965 smash ‘Get Out Of My Life Woman’ (the opening drum beat of which has been sampled on countless hip hop recordings), writer, pianist producer and singer Eddie Bo’s kinetic 1962 number ‘I Got To Know’, Karl King’s cool shuffling ‘Trick Bag’ and Aaron Neville’s impassioned 1966 ballad ‘Tell It Like It Is’ are a glowing testimonial to Cosimo Matassa’s studio artistry.

Clearly Cosimo Matassa understood and could capture the New Orleans sound better than just about anyone else in the recording field, and was highly responsible for the city being closely associated with R&B and rock ‘n’ roll as well as jazz. If you only buy one CD this month, make it Cracking The Cosimo Code. Cosimo Matassa R.I.P. 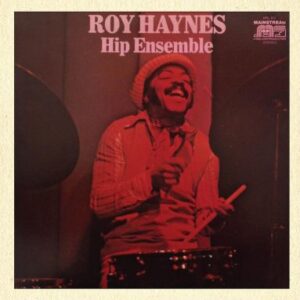 A very welcome and long overdue reissue of the aptly named Hip Ensemble, the classic, 1971 post hard bop, jazz-fusion album by the vital and ground-breaking bebop drummer, Roy Haynes. Nicknamed Snap Crackle by bassist Al McKibbon in an attempt to describe the drummer’s unique sound (‘Snap Crackle’ was used as song title for the outstanding composition on Haynes’ wonderful 1962 Impulse album, Out Of The Afternoon, featuring Roland Kirk), Haynes in his illustrious career has worked with most of the major figures in jazz. Charlie Parker, Miles Davis, Bud Powell, Thelonious Monk, Eric Dolphy and John Coltrane – Haynes seat in with them all.

As the 70s dawned, Haynes wanted to record with his own group once again, having been a sideman for much of the 60s. Recruiting German pianist Carl Schroeder, Japanese bassist Terud Nakamura, gifted R&B saxophonist George Adams, Texan trumpeter Marvin Peterson and conga player Lawrence Killian, Haynes cut Hip Ensemble for Bob Shad’s Mainstream label. Blending current progressive trends and more traditional jazz, Haynes and company cooked up a potent musical brew, though very much of its time, that still sounds fresh today.

Haynes’ composition ‘I’m So High’, is a strutting blues, with the drummer, as ever, controlling proceedings from the drum seat, while his other number for the album, ‘Tangiers’, is an exciting, full on freeform jazz exploration. George Adam’s dynamic tenor sax dominates much of the record and his compositions ‘Satan’s Mysterious Feeling’ and ‘You Name It’ are solid, funky grooves, which serve as the ideal platform for improvisation and Haynes’ frisky and exhilarating drumming. 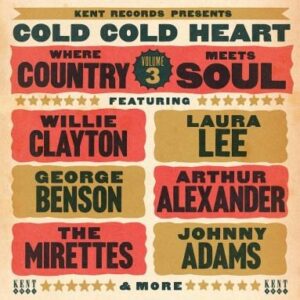 Once again compiled and noted by Tony Rounce, this is another excellent Ace compilation that amply illustrates that the line that separates the genres of country and soul music has always been an extremely thin one. It is evident that over many decades there has always been a constant exchange of strong repertoire and influences between the two major genres of American popular music. Blues was always conversant with hillbilly music, while country music, in the segregated South of the 1930s and 1940s, dominated the radio that many black performers grew up listening to, hence their drawing creative inspiration from that style.

Cold Cold Heart – Where Country Meets Soul: Volume 3 possesses all the style, sophistication and unlimited soul of its excellent predecessors, Behind Closed Doors and Sweet Dreams. As the title would suggest, Volume 3 well represents covers of the immortal songs written by the Godfather of Country music, Hank Williams. Johnny Adams 1963 cover of Williams’ great brooding ballad ‘Cold Cold Heart’ takes the song to Soulsville, while Ralph “Soul” Jackson funks up the country icons jubilant 1952 hit with his spirited 1967 version of ‘Jambalaya’.

Roll on Volume 4 of Where Country Meets Soul.