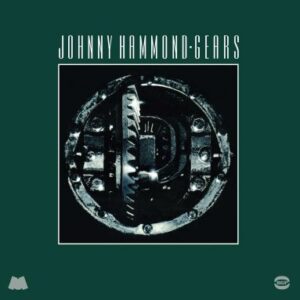 Recorded at the Mizell brothers Fantasy studio, with their regular hot session musicians (including outstanding drummer Harvey Mason, bassist Chuck Rainey and guitarist Craig McMullen), music industry veteran Hammond (he had made his name with Prestige in the late 1950s) proceeded to define the danceable jazz funk sound of the era with swathes of synthesisers, lush vocal and horn arrangements and unstoppable 70s grooves.

Strangely, for an album that is so much of its time (the LP is the very quintessence of the year 1975; though the sleeve art is remarkably tasteful for the period), Gears still sounds relevant and utterly contemporary – despite 2015 marking its 40th anniversary. This is probably because the tracks have been used on video games and that so many artists have either sampled it, or have drawn direct influence from Hammond’s dizzying jazzy funk odyssey.

Musically the album swings from the blistering funk workouts of ‘Los Conquistadores Chocolatés’ and the exhilarating ‘Shifting Gears’ to the cinematic cityscape evoked by ‘Lost on 23rd Street’. ‘Fantasy’ carries a euphoric, carefree vibe, while the opening track, ‘Tell Me What To Do’, echoes the political tension in the USA during the mid 70s.

The six bonus outtake tracks are equal to the released album. The sparse version of Gears final track, ‘Can’t We Smile?, offers a fascinating glimpse into the recording methods of the Mizell brothers. The rhythm section would be rehearsed before taping a session with Hammond. Later, the backing vocal, strings and solos, which were recorded live, would be added leading to a more exciting, completed feel to the outtakes.

A US album copy of Gears, in good condition, costs around the £400 mark. Ace’s immaculate double album reissue, re-mastered from a new 24/96 transfer of the original tape costs considerably less. You know what to do.

Johnny Hammond – Gears can be bought on vinyl from Ace Records website. It is also available as a CD.

Little Bob Story – Off The Rails And Live In ’78 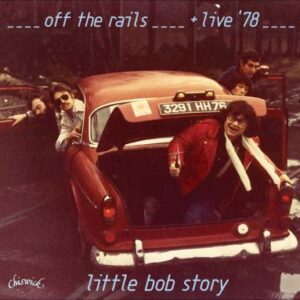 Their brilliance was quickly recognised by Dr Feelgood, who offered them support slots, and in 1976 Little Bob Story played their first gigs in the UK. Little Bob Story’s vigorous brand of MC5-style rock drew early punks, such as Brian James, Glen Matlock, Paul Simonon and Chrissie Hynde to their numerous London gigs. Never just another pub rock band, Little Bob Story had more in common with Motorhead and The Damned.

Intractable contractual obligations in France undoubtedly harmed the group’s commercial success but they determinedly took advantage of being able to handle their own affairs in the UK. Following on from a Little Bob EP, issued on Chiswick in December 1976 and produced by Roger Armstrong, the band recorded their second album, Off The Rails, for the label. Released in November 1977, Off The Rails defined the Little Bob Story sound.

Reissued here with five exhilarating live numbers from March 1978 recorded at Dingwalls, London (featuring tracks from their first album, High Time, and a loving cover of The Small Faces’ ‘All Or Nothing’), Off The Rails lives up to the title. The punky ‘Little Big Boss’ belittles a French radio host, whom guitarist Guy-Georges Gremy hit with a candlestick during a live on-air interview. The fight that ensued, to which the police were called, is captured within the band’s virile guitar attack.

The swaggering ‘Mr Tap’ shows why Johnny Thunders wanted to jam with the band, ‘When The Night Comes’ is an MC5 style salute to joy to be derived from playing rock ‘n’ roll’, while ‘Round The Corner’ revives the potency of Little Richard’s music for the punk generation. The album’s sole cover is a spirited version of the UK 60s band The Sorrows’ ‘Baby’, which also betrays a love of The Animals and The Pretty Things. Perhaps the real standout track here is the grindingly malevolent ‘Riot In Toulouse’. Inspired by a clash between anarchists, cops and CRS state security police at one of their Toulouse gigs, it’s on this five-minute track that Little Bob Story attain a compelling and highly combustible Stooges-like intensity.

Off The Rails is the evidence that Little Bob Story where definitely one of the best raw power rock ‘n’ roll bands operating during the turbulent mid-70s.

Off The Rails And Live In ’78 can be bought both on CD and digitally from Ace Records website. 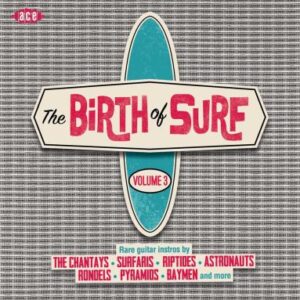 Compiled and noted by Alan Taylor of Pipeline magazine, here is the third instalment of Ace’s superb series of CDs charting the dawn and brief heyday of instrumental surf music. As with the previous editions, The Birth of Surf Volume 3 perfectly blends the familiar with the more esoteric surf material.

Progenitors of the sounds that became termed ‘surf’ include The Riptides’ 1959 classic ‘Machine Gun’ (much loved by The Cramps, and might have inspired their number ‘Call Of The Wighat’) and the Johnny & The Hurricanes 1960 hit ‘Sheba’.

Chronologically the CD charts the ascension of the twanging surf sound with such storming classics as The Rumblers menacing ’Boss’ (which arguably inspired The Cramps’ 1980 composition ‘Garageman’), The Chantays’ simmering ‘Scotch High’s’, their follow up to their immortal smash hit single ‘Pipeline’ (covered by Johnny Thunder’s in 1979 on his So Alone solo LP) and the undisputed King Of The Surf Guitar, Dick Dale & The Del-Tones’ thrilling 1964 instrumental, ‘The Victor’.

Combined with the legendary Novas’ (the band responsible for the 1965 wrestling hit ‘The Crusher’, covered by, you guessed it, The Cramps) propulsive ‘Take 7’, and the magnificent Surfaris, who scored one of the biggest surf hits of all time with ‘Wipe Out’ (featured on Kenneth Anger’s Scorpio Rising soundtrack) and here provide their final, thrilling 1965 surf tune, ‘Storm Surf’, Volume 3 of The Birth Of The Surf is definitely Tube City.

The Birth Of Surf Volume 3 can be bought on CD from Ace Records website. 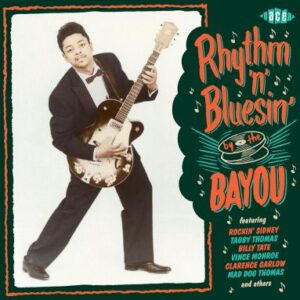 Taken from the tape vaults of Louisianan label bosses JD Miller, Eddie Shuler, Floyd Soileau and Joe Ruffino, this is remarkably the twelfth volume in Ace’s acclaimed By The Bayou series of CDs. A wondrous collection of late 50s/early 60s Southern rockabilly and rock ‘n’ roll, suffused with hot New Orleans R&B and Cajun boogie, the By The Bayou discs are magnificently compiled and noted by Louisiana rock ‘n’ roll expert Ian Saddler. While compiling the last three ‘Rhythm ‘n’ Bluesin’’ editions of the series, Saddler found that he had uncovered a considerable number of tapes featuring vocal groups that deserved their own compilation. As with much of the By The Bayou series, most of the recordings are previously unreleased.

Arguably, the best-known group featured here is Cookie & The Cupcakes. Their 1962 cover of Jivin’ Gene’s swampy ballad ‘Breaking Up Is Hard To Do’ is a rare gem, as is Kate Webster’s version of Phil Phillips’ immortal ‘Sea Of Love’. Together with The Velvetiers’ wanton 1959 ‘Feelin’ Right On Saturday Night’, the swinging ‘Calimo’ by an Unknown Group, the blues soaked doo wop of Charles Morris’ ‘I Need Your Loving’ and The Raves’ 1959 rockin’ tribute to ‘Billy The Kid’, Rhythm ‘n’ Bluesin’ By The Bayou – Vocal Groups emphasises that melodious harmonies were a vital ingredient of the rich South Louisiana musical gumbo of the 1950s.
It is fervently hoped that yet more editions of By The Bayou will be forthcoming from the archival work of Ian Saddler.

Rhythm ‘n’ Bluesin’ By The Bayou can be bought on CD from Ace Records website. 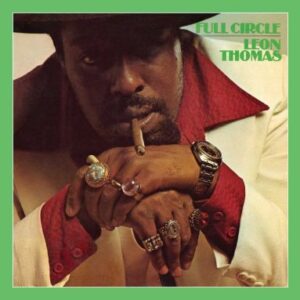 This is the final 1973 ‘golden years’ Leon Thomas studio reissue from the vaults of Bob Thiele’s Flying Dutchman label. Utterly distinctive jazz vocalist Leon Thomas had been introduced to jazz audiences in 1969 singing and yodelling on Pharoah Sanders’ epic composition ‘The Creator Has A Master Plan’, featured on the saxophonist’s Karma LP. Bob Thiele, the former head of Impulse, the label that issued some of Sanders’ and John Coltrane’s best work, was always convinced he could introduce Leon Thomas to a much wider audience on his own label.

Thiele had witnessed CTI Records attain commercial success for Esther Philips on her From A Whisper To A Scream album, utilizing the arranging talents of the former leader of James Brown’s band, Alfred ‘Pee Wee’ Ellis. The label boss thought, correctly as it transpired, that Ellis could work the same artistic alchemy again for Leon Thomas.

Thomas’ 1972 offering Blues And The Soulful Truth (which echoes Oliver Nelson’s 1961 LP The Blues And The Abstract Truth in title and intent) presented an exhilarating trip through the music of black America, with a heady brew of soul, jazz and blues. Though Blues And The Soulful Truth inexplicably did not confer upon Thomas the superstar status Thiele was expecting, it did draw the attention of Carlos Santana, who brought the singer on to his Welcome album and into his subsequent touring band.

With this added attention, Thiele believed that 1973 was to be the year Thomas crossed over. A more commercial soul/funk/jazz album, Full Circle, was to be conceived, featuring a superb band of New York session players (including guitarist Joe Beck, drummer Bernard ‘Pretty’ Purdie, Richard David on electric bass, ‘Pee Wee’ Ellis on sax and organist/pianist Neal Creque), arranged by Glenn Osser.

Opening with a fantastic, soaring version of the late, great B.B. King’s blues ‘Sweet Little Angel’, Thomas also offers highly credible covers of Michael Jackson’s ‘I Wanna Be Where You Are’, The Jackson 5’s ‘Got To Be There’, Santana’s driving ‘Just In Time To See The Sun’ and Johnny Ace’s achingly romantic ballad ‘Never Let Me Go’. Thomas’ slow reading of Stevie Wonder’s ‘You Are The Sunshine Of My Life’ isn’t as successful but this is more than compensated for with Creque’s original, questing jazz funk compositions ‘It’s My Life I’m Fighting For’ (a sequel to ‘Shape Your Mind To Die’ from Blues And The Soulful Truth) and the hypnotic rhymic soul of ‘Balance Of Life (Peace Of Mind)’.

Unfortunately, though sales of Full Circle were strong, the album didn’t fulfil Thiele’s high expectations. Nevertheless, Full Circle is a timeless classic, and Thomas, who has been sampled countless times, continues to inform contemporary music since his death in 1999. Essential listening.

Full Circle can be bought on CD from Ace Records website.