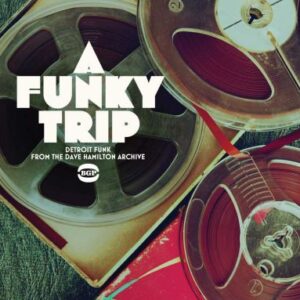 Another treat for vinyl lovers this month – 12 brilliant Detroit funk numbers, taken from the vaults of the legendary Motor City producer Dave Hamilton, compiled and noted by Dean Rudland, on one Kent / Ace album. Yes, Christmas has once again arrived early this year.

Hamilton’s life in black American music began playing jazz in small combos during World War II and carried on through to producing and creating electro funk in the 1990s. He played with Hank Ballard & The Midnighters, John Lee Hooker and was a featured player on many early Marvin Gaye Motown classics. During the 60s and 70s, Hamilton ran many Detroit soul labels (Temple, Topper, TCB and Demo Ristic, to name but a few) that produced Northern Soul, contemporary and soul funk cuts by various artists, many included on this album.

Kicking off with the first funk track that Ace uncovered in Hamilton’s archives, Billy Garner’s barnstorming groove ‘Brand New Girl’, the LP delivers a succession of 70s dance-floor treasures. Highlights include The Future Kind’s twisted and satanic ‘The Devil Is Gonna Get You’, O.C. Tolbert’s harmonica driven ‘The Grown Folks Thing’, Johnny Walker’s hallucinatory instrumental ‘Funky Trip’ (there are sounds on this that sound like early Einstürzende Neubauten), the infinitely propulsive ‘Bump With Me’ by The Webb People (featuring the same crazed personal as The Future Kind) and Dave Hamilton’s own ‘The Deacons’, in part inspired by Young Hold Unlimited’s 1968 hit ‘Soulful Strut’.

A Funky Trip – Detroit Funk From The Dave Hamilton Archive is the ideal compilation for playing out, or at home, if you want to move your feet. This intoxicating collection of funky 70s Detroit music is a timeless joy.

A Funky Trip can be bought on vinyl from Ace Records website. It’s also available to buy digitally. 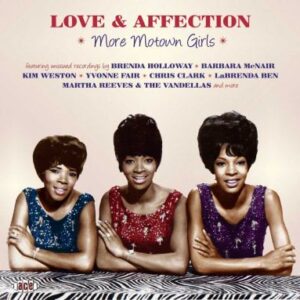 Impeccably compiled, researched and noted by Keith Hughes, together with Mick Patrick, Ace’s indispensable 2013 Finders Keepers: Motown Girls 1961-67 compilation focused upon the female artists who were key to the huge success of Berry Gordy’s Tamla Motown label. A remarkable selection, comprised of an equal split between issued and amazingly previously unreleased tracks, spread out over twenty four vital numbers, Finders Keepers put the spotlight on less familiar Motown artists and their songs.

This superb follow-up disc, once again compiled by Hughes and Patrick, features 25 tracks that have never been issued on CD or, remarkably, on vinyl. Love & Affection opens up in high style with Brenda Holloway’s yearning dance-floor filler ‘Reassure Me That You Love Me’, followed by the equally dramatic ‘Any Girl In Love (Knows What I’m Going Through)’ by Gladys Knight & The Pips. This CD just doesn’t let up; Barbara Randolph’s exhilarating version of The Miracles’ Ivy Jo Hunter/Stevie Wonder number ‘My Love Is Your Love (Forever)’, Martha Reeves & The Vandellas thrilling ‘This Is The Love (I’ve Been Waiting For), Debbie Dean’s spine-tingling ‘I Can’t Make It Without You’, Liz Lands alternative rendition of Berry Gordy’s ‘Midnight Johnny’ – this is all prime Motown. It’s incredible that this material has been awaiting release for nearly 50 years.

As good, if not better, than Finders Keepers, Love & Affection is aptly named. Thank the stars, and Ace Records, that these tracks are now available.

Love & Affection can be bought on CD at Ace Records website. 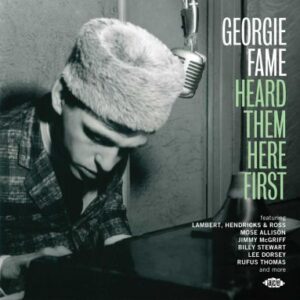 The redoubtable Lancastrian keyboard player/singer Georgie Fame deservedly joins the ranks of The Ramones, Elvis, Cliff Richard, Dusty Springfield, Nick Cave, David Bowie and The New York Dolls in Ace’s celebrated Heard Them Here First series. Playing regularly at the Flamingo Club in Soho, London, during the early 1960s, Fame was introduced to a wealth of music (much of which had not been released as yet in England) from the requests he received from the regular patrons of the club, many of whom were American GIs.

Arguably, the greatest soul jazz singer/musician that the UK has ever produced, Fame managed to instil his readings of so much prime 60s American R&B, soul, jazz and Jamaican blue beat with an utterly distinctive feel, in the process making his mark as the first English Modernist icon.

Compiled and noted by Tony Ellis and Tony Rounce, Georgie Fame Heard Them Here First includes many of the singer’s prime sources of inspiration whose work he covered throughout the 60s. These artists included Oscar Brown Jr (the gritty ‘Work Song’), Fats Domino (the swinging ‘Sick And Tired’, which was a featured cover on Fame’s 1965 Fats For Fame EP), Jon Hendricks (Fame crossed over into the pop charts in 1965 with his joyous version of Lambert, Hendricks & Bavan’s ‘Yeh-Yeh!’) and perhaps Fame’s biggest inspiration, Mose Allison (represented here by Allison’s version of Willie Dixon’s ‘I Love The Life I Live’, covered on Fame’s 1964 Fame At Last album).

Georgie Fame Heard Them Here First can be bought on CD from Ace Records website. 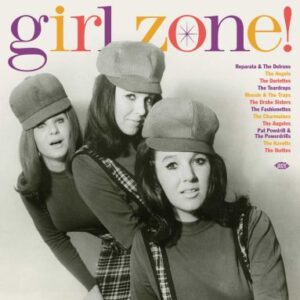 Compiled and noted by Mick Patrick, this is an utterly indispensable magma red vinyl only compilation of 1960s girl groups. Not only does the whole album look wonderful (the cover features a rare photograph of the mysterious Drake Sisters, while Ace designer Niall McCormack makes the colourful inner sleeve retro package as alluring as possible for a vintage vinyl junkie), the twelve tracks contained within are as hot as the colour of the record.

Opening with the determined agitation of Reparata & The Delrons’ number ‘Panic’, the B-side of their risqué single ‘Saturday Night Didn’t Happen’ that was considered ahead of its time in 1968, and closing with Ike Turner’s effortlessly glamorous backing singers The Ikettes, singing his vital dance-floor composition ‘Camel Walk’, Girl Zone! is a real blast from start to finish. Starting with The Angels’ unlikely but spirited version of Richard Berry’s garage punk stable ‘Louie Louie’, by way of The Teardrops’ defiantly upbeat ‘Here Comes The Loneliness’, The Fashionettes’ hypnotic ‘Losin’ Control’, Pat Powdrill & The Powerdrills soulful 1967 ‘Together Forever’, co-written by Barry White before he achieved fame, and the superb funky-style groove of The Kavetts’ ‘I’ve Got A Story To Tell You’, co-produced by the living R&B legend Andre ‘Bacon Fat’ Williams, Girls Zone! constantly delivers.

If you’re into your 60s girl groups, then you’ll have to acquire the Girl Zone!

Girl Zone! can be bought on vinyl from Ace Records website. 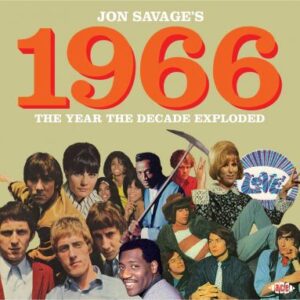 This is the brilliant double CD soundtrack companion to writer Jon Savage’s latest book examining the pivotal year of the 60s that, from the author’s perspective, moulded the rest of the 20th century – 1966. Compiled and noted by Savage (his previous books include The Kinks: The Official Biography, England’s Dreaming: Sex Pistols and Punk Rock and Teenage: The Creation Of Youth 1875-1945), who is eminently qualified for this study of how 47 1966 pop 45 RPM singles encapsulated the concepts, stances and ideological experiments of an era that would be in later years be covered across entire albums.

Across a wide spectrum of musical genres (60s garage punk, folk, R&B, soul, the birth of psychedelia, Motown and pure pop), Savage selects 7-inch records that expressed the possibilities of 1966 “with an extraordinary electricity and intensity.” Despite the fact that there are key artists of the period missing (for instance, obviously due to licensing ‘difficulties’, there are no Rolling Stones or Beatles tracks here), this 1966 compilation perfectly encapsulates the dramatic 12 months of that epochal year.

From The Who’s epic song of teen diffidence ‘Substitute’, to Sandie Shaw’s frank female depiction of bitter relationships on ‘Nothing Comes Easy’, the mania of The Count Five’s ‘Psychotic Reaction’, the desperation of The Supremes’ ‘You Keep Me Hangin’ On’, The Velvet Underground’s beautiful, contemplative single ‘I’ll Be Your Mirror’ and David Bowie’s insightful vision of the bleak underbelly of Swinging London in ‘The London Boys’, Savage’s 1966 is a thrilling ride through the pop sounds released during 365 days that also heralded a new dawn. That the discs feature more obscure faire, such as The Association’s vision of the emerging West Coast scene in ‘Along Comes Mary’, the dance reverb and dub experimentation featured on Rex Garvin and The Mighty Cravers’ James Bond/James Brown celebration ‘Sock It To ‘Em J.B. – Part 1 & II’ and Kim Fowley’s band Freaks Of Nature frantically urging ‘People! Let’s Freak Out’, only adds to the dynamism of the compilation.

With Wilson Pickett’s definitive reading of ‘Land Of 1000 Dances’,? And The Mysterians anticipating Suicide with ’96 Tears’, Link Wray and The Raymen’s vigorous pop art remake/remodel of Neal Hefti’s ‘Batman Theme’ and James Brown prefiguring jungle and modern dance music with the use of loops on his live Florida recording ‘Tell Me That You Love Me’, 1966 is definitely a year worth revisiting again and again.

Jon Savage’s 1966 The Year The Decade Exploded can be bought on CD from Ace Records.

Ace Records can be found online here: acerecords.co.uk as well as on Facebook and twitter, as @AceRecordsLtd.