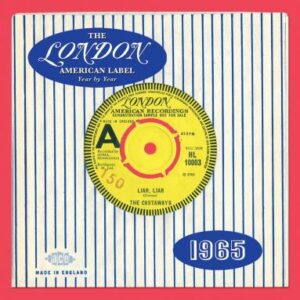 18 months overdue (licensing problems being to blame), but the latest of Ace’s Year By Year examinations of what was released on the London label, the UK’s most eminent resource for US rock ‘n’ roll. Pop and R&B, during the Golden Age of popular music is well worth the wait. The year in question for this CD, noted and compiled by Tony Rounce, is 1965 – obviously a vintage 12 months for American music.

By 1965 the London label was not the only UK label releasing US music, and American audiences were now increasingly interested in UK music (thanks to The Beatles and the British bands that followed in their wake), but the label’s combination of American smash hits and more esoteric faire made their releases stand out.

Unbelievably, London issued The Novas’ wayward salute to the Milwaukee 1963 World Heavyweight Championship wrestler, Reggie Lisowski, more commonly known as ‘The Crusher’.  This strident ditty was of course much later immortalised by The Cramps on their 1981 masterwork, Psychedelic Jungle, but The Novas’ sleazy original version still grips all “turkeynecks.”

The musical riches contained on 1965 are both eclectic and abundant. James Brown &The Famous Flames start to change the course of music with ‘Have Mercy Baby’ and the evergreen ‘Papa’s Got A brand New Bag Pt 1’, while The Righteous Brothers (‘Just Once In My Life’ and ‘Unchained Melody’) and The Ronettes (‘You Baby’) recordings amply evince Phil Spector’s dynamic Wall of Sound. Jerry Lee Lewis ends his association with Sun Records in classic style with an exhilarating reading of ‘Take Me Back To Old Virginia’, The Castaways ‘Liar, Liar’ is the quintessence of garage rock, Shirley Ellis’ infectious pop R&B ‘The Clapping Song’ is merrily timeless and Dobie Gray’s rendition of ‘The “In” Crowd’, covered by everybody from Ramsey Lewis to Bryan Ferry, remains groovy beyond measure. 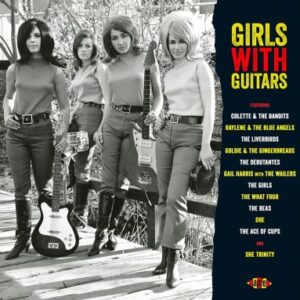 As Patrick outlines in the inner bag liner notes, like many girl bands of the era, the Detroit rockers The Debutantes were veterans of USO shows entertaining the US troops in Vietnam. Before their first South East Asia engagement, in 1967 The Debutantes recoded a barnstorming version of the 1963 hit by The Five Du-Tones, ‘Shake A Tail Feather’, co-written by R&B godfather, Mr. Andre Williams.

Raylene & The Blue Angels make Johnny Kidd & The Pirates’ British rock ’n’ roll classic ‘Shakin’ All Over’ their own, while The Liverbirds of Merseyside pay passionate homage to Ellas McDaniel/Bo Diddley with their 1966 cover of his 1961 track, ‘Bo Diddley Is A Lover’ and Gail Harris and male US garage punk progenitors The Wailers, in a 1961 live recording featured on The Fabulous Wailers At The Castle LP, tear into Ike & Tina Turner’s ‘I Idolize You’.

New York girls Goldie & The Gingerbreads give a tough talking reading of a Shel Talmy production of Carl MacDonald’s ‘Please Please,’ while another mid 1960s Talmy session, this time with Colette & The Bandits recording ‘A Ladies’ Man’, is equally strident and takes no prisoners with fuzz guitars set to daze. The Girls are as cool as their black clad Capitol records press photo, playing ‘My Baby’, written and sung by their drummer, Margaret Sandoval, while The What For manage to simultaneously sound menacing and seductive on ‘I’m Going To Destroy That Boy’, remarkably “arranged, conducted and produced” by jazz genius Miles Davis’ main studio collaborator, Teo Macero.

Girls With Guitars is 100 % committed garage rock ‘n’ roll action from start to finish. Dig it. 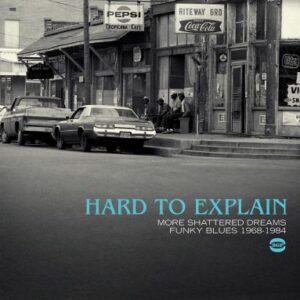 Compiled and liner noted by Dean Rudland, the wonderful 2011 Ace/BGP CD Shattered Dreams: Funky Blues 1967-1979 compilation reflected upon how sophisticated black American urban blues artists adapted their sound, due to the changing tastes in their audience and the all pervading sense that the hopes and aspirations of blacks in the early 60s were inexorably heading towards the widespread disillusion of the Post ‘Nam/Watergate 1970s. The featured players were mostly older man, recording for Modern, Stax, trying to make it through life, with tough talk, cool attitude, still playing their then unfashionable music.

Rudland has now returned to the music and the era of Shattered Dreams to assemble Hard To Explain, a disc that might even prove to be superior to the first.  Funk was clearly an important ingredient to the music during this period. The CD opens with Freddy Robertson’s 1979 funky update of his stealthy 1965 Checker hit single, ‘The Creeper’, Artie ‘Blues Boy’ White gets a mighty groove going with ‘Gimme Some Of Yours (I’ll Give You Some Of Mine’), while Albert King tears up James Brown’s ‘Cold Sweat’ with an epic, guitar flailing instrumental version, recorded in 1969 but released on King’s fine 1972 Stax album, Funky London. The previously unreleased ‘Don’t Down Me People (Pt 1)’ by Memphis Soul illustrates the influence that Jimi Hendrix exerted upon the music during this time frame.

Elsewhere, Lowell Fulsom with the darkly threatening ‘Lovemaker’ (1977), Jimmy McCracklin’s ‘I Finally Got You’ (1972), Shakey Jake’s rollicking ‘Sister Rose’ (1974, the best song The MC5 never wrote) and Earl Wright’s ‘Them Love Blues’ (1969) prove that that blues was alive and in rude health during the late 60s and 70s.

Ace CD of the month, and hopefully there will be further Shattered Dreams to follow with another disc and an album release. 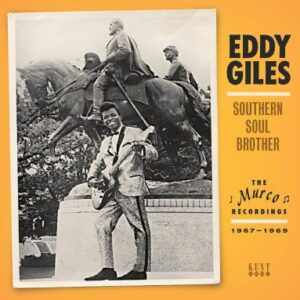 Compiled and noted by Ady Croasdell and Dean Rudland, this overview of Shreveport, Louisiana’s Eddy Giles’ time as a leading light at Dee Marais Murco label is a highly rewarding.  Giles might have only scored a 1967 regional hit with Murco, the poignant ‘Losin’ Boy’, which makes clear the singer/songwriter’s debt to Ray Charles, but his legacy is highly impressive.

‘I Got The Blues’ and ‘Ain’t Gonna Worry No More are the very essence of soulful blues, while ‘Happy Man’ and ‘While I’m Away (Baby, Keep The Faith)’, an absent soldier’s lament, perhaps awaiting to be sent to the raging war in Vietnam, are textbook examples of deep and stately soul, while the previously unreleased country number ‘Pins & Needles’ is effortlessly transposed to soul terrain in Giles’ capable hands.

Giles was not only master of slow, soul ballads; Southern Soul Brother showcases his abilities as a bringer of the funk. ‘Eddy’s Go-Go Train’ updates/remodels James Brown’s ‘Night Train’ for the late 60s audience, ‘Music’ flows with a jubilant Sly Stone feel, while ‘Soul Feeling Part 1 and Part 2’ is a relentless southern funky classic, complete with a thrilling drum break and grooving organ keyboard solo.

By the end of the 70s Eddy Giles had tired of secular music and embraced gospel again, the music that had first inspired him to perform.  The Reverend Eddie Giles appears very contented in the current photo outside his Shreveport church within the Southern Soul Brother booklet, but the church’s gain is definitely the soul fan’s loss. 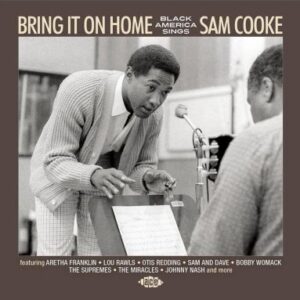 Following on from Ace’s series of Black America Sings Otis Redding, Bob Dylan and Lennon & McCartney CDs, Tony Rounce’s compiled and noted disc focuses upon Sam Cooke, the songwriter. Though the ill-fated Cooke, shot down in his prime by the manager of the LA Hacienda Motel during December 1964 in a highly dubious case of “justifiable homicide”, is always acclaimed as one of the very great soul performers and singers of the 60s, alongside Marvin Gaye, Al Green or Otis Redding, his talent as a songwriter is often overlooked.  Bring It On Home rectifies this oversight.

Cooke learnt how to write songs while he was a member of the Soul Stirrers gospel group and his song-writing career soon took off when he embraced secular music in 1956. Between 1957 and a year after his death, Cooke scored 35 R&B hits, 25 of which were penned by him or co-written, as a number of the tunes were the singles B-sides.

The CD opens with a 1973 hit version of one of Cooke’s biggest numbers, as well as other compositions, ‘Having A Party (Medley)’ by The Ovations featuring Louis Williams. This MGM single captures the joyous spirit of Cooke’s original; as well it might as Louis Williams claimed that the singer/songwriter’s spirit guided him in the studio.

Elsewhere Aretha Franklin makes ‘Good Times’, the last hit of Cooke’s lifetime, her own in her inimitable fashion, Sam & Dave’s 1966 version of ‘Soothe Me’ justly gave the duo their first UK hit and Otis Redding pays homage to perhaps his greatest inspiration by covering Cooke’s first posthumous hit, ‘Shake’, in 1965.  The same year, The Supremes recorded an entire tribute album, We Remember Sam Cooke, and the finale of that LP, ‘(Ain’t That) Good News’, featuring an uncommon, impassioned lead vocal by Florence Ballard, is included here, while Eddie Floyd’s 1968 storming Memphis version of Cooke’s B-side ‘Bring It On Home To Me’ is electrifying and Little Anthony & The Imperials appear to become possessed during their fevered 1959 rendering of ‘I’m Alright’.

The lustre of Sam Cooke’s music will never fade, a point

Bring It On Home repeatedly underlines with this collection of uniformly respectful and appreciative cover versions by some of the greatest figures in soul music.