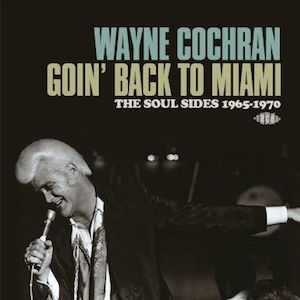 Goin’ Back To Miami: The Soul Sides 1965-1970 makes a good case for wild, blonde bouffant quiff sporting, blue eyed soul belter Wayne Cochran as being one of the great soul entertainers of the era. Conscientiously researched, compiled and noted by Alec Palao, featuring a lengthy, rare interview with the prodigious Cochran, who has been a pastor for the last 20 years, combined with astonishing photographs of the possessed singer, Goin’ Back To Miami is a blast from start to finish.

Covering Cochran’s full repertoire, from funky R&B (Willie Dixon’s Hoochie Coochie Man, Bobby Marchan’s Get Down With It), through hipster country soul (Big City Woman, Life’s Little Ups And Downs) and groovy biker funk (My Machine, Chopper 70), it quickly becomes clear why he was personally embraced by James Brown, Otis Redding and Jackie Wilson (performers from whom Cochran learnt much). Cochran really loved black music with every fibre of his being. Not only could he sing a credible version of the Harlem Shuffle, the flamboyant singer and his C.C. Riders could also rock the stage of the Apollo in Harlem.

If all that wasn’t enough, Goin’ Back Too Miami comes with another CD containing a previously unreleased, volatile Wayne Cochran & The C.C. Riders Show from 1969 in Las Vegas. Featuring Cochran’s unfettered renditions of Dance To The Music, Soul Man and I Can’t Turn You Loose and crazed exhortations to the audience (despite it being a live in the studio session), The Wayne Cochran Show acts as a reminder that the singer managed to bring full on, down home R&B soul to Vegas when Sammy Davis Jr was the only African American in town. Wayne Cochran was much, much more than an admittedly incredible hair-do. 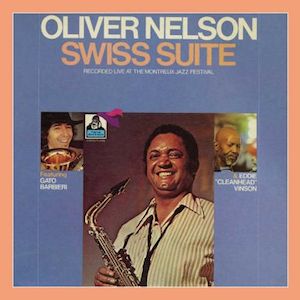 Alto saxophonist Nelson, who arranged many of organist Jimmy Smith’s outstanding Verve albums and composed numerous television scores (including The Six Million Dollar Man, Columbo and Ironside) was clearly at the top of his game when he composed the dynamic 27 minute Swiss Suite, specifically for the Festival. Sweeping the 26 member big band through various musical genres, from the explosive fanfare at the outset, through blues, bebop and propulsive Latin music, featuring the saxophonists Barbieri, Nelson and Vinson, Swiss Suite achieves a driven sense of transcendence.

The rest of the album is devoted to vibrant reworking of three of Nelson’s greatest compositions; his timeless 60s jazz standard Stolen Moments, Black, Brown & Beautiful and the track Blues & The Abstract Truth. Tragically, Nelson died of a heart attack in 1975 at the age of 43, but this reissue should reignite interest in the work of this great composer/arranger. 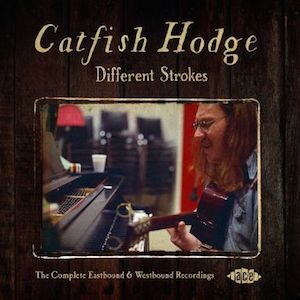 Compiled and noted by Dean Rudland, Different Strokes does what it says on the tin. Different Strokes combines the three albums (Boogie Man Gonna Get Ya, Dinosaurs And Alley Cats and Soup Opera’s (sic)) that 70s Detroit cult blues/folk/ boogie rocker Bob ‘Catfish’ Hodge cut for Armen Boladian’s Westbound Records, then home of George Clinton’s mighty Funkadelic. In fact, Boladian invited Clinton and Calvin Simon of Funkadelic to see Hodge play to gauge their reaction, before he would sign him.

Arguably, the best of the three albums featured here is Hodges’ first 1972 LP, Boogie Man Gonna Get Ya, containing the raunchy 9 minute salute to John Lee Hooker Boogie Man which opened the door to Boladian’s office, this compilations determinedly funky title track, the manic soul/rock of I’ll Be Gone and a spirited cover of The Beatles’ I Want You (She’s So Heavy), that had entranced George Clinton when he had witnessed Catfish’s live performance.

Despite the presence of Dr.John, Bonnie Raitt and the Flying Burrito Brothers’ Sneaky Pete Kleinow, Hodge’s last 1975 album for Boladian reflects the lassitude of its mid 70s Los Angeles recording environment, yet the second 1974 Catfish Hodges album, Dinosaurs And Alley Cats, manages to convey a more engaging nonchalant feel, with compositions such as the Howlin’ Wolf inflected Color TV Blues and soulful ballad Circus Is In Town. 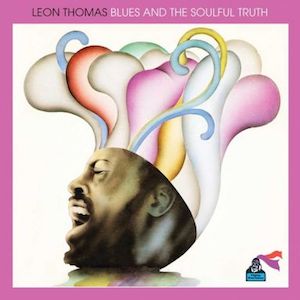 Here is yet another masterwork reissue from the vaults of Bob Thiele’s Flying Dutchman label. Utterly distinctive jazz vocalist Leon Thomas’ 1972 offering Blues And The Soulful Truth (which echoes Oliver Nelson’s 1961 LP The Blues And The Abstract Truth in title and intent) presents an exhilarating trip through the music of black America, with a heady brew of soul, jazz and blues.

As Dean Rudland outlines in the notes, Thiele had achieved a similar mix of musical genres for Esther Philips on her commercially successful From A Whisper To A Scream album, utilizing the arranging talents of the former leader of James Brown’s band, Alfred ‘Pee Wee’ Ellis. Thiele thought, correctly as it transpired, that Ellis could work the same alchemy again for Leon Thomas, who had been introduced to jazz audiences in 1969 singing and yodelling on Pharoah Sanders’ composition The Creator Has A Master Plan, featured on the saxophonist’s Karma LP.

Blues And The Soulful Truth is a timeless classic that has been sampled countless times and continues to inform contemporary music. Essential listening. 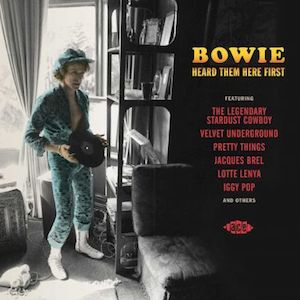 Beginning with Louie – Go Home by Paul Revere & The Raiders (covered by Davie Jones & The King Bees) and Bobby Bland’s 1961 soul classic I Pity The Fool (recorded by Bowie’s Manish Boys), through to the twisted, proto-psychobilly of The Legendary Stardust Cowboy’s I Took A Trip On A Gemini Spaceship (covered by Bowie on his 2002 LP, Heathen, as a tip of the hat for borrowing the name for his Ziggy Stardust character), the CD reflects the myriad of changes that David Jones would undergo throughout his decades in the spotlight centre stage.

The CD notes are pretty good too, but, then again, I would say that. I wrote them.